pronunciation ) is a town in the Mathura district of Uttar Pradesh, India. It is the site where according to Hinduism, Lord Krishna spent his childhood days. The town is about 11 km away from Mathura, Krishna's birthplace on the Agra-Delhi highway (NH 2).[2] The town hosts many temples dedicated to the worship of Radha and Krishna and is considered sacred by Vaishnavism.[3] 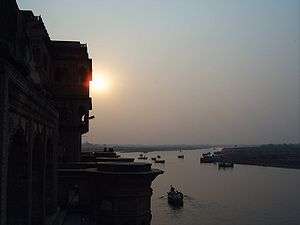 Kesi Ghat on the Yamuna river

The ancient Sanskrit name of the city, Vṛndāvana, comes from its groves of vṛndā Tulasi (tulsi, Holy Basil) Ocimum tenuiflorum with vana meaning a grove or a forest.[4] Two small groves still exist at Nidhivan and Seva Kunj.

Vrindavan has an ancient past, associated with Hindu history, and is an important Hindu pilgrimage site. One of its oldest surviving temples is the Govinda Dev temple, built in 1590, with the town founded earlier in the same century.[5][6] The essence of Vrindavan was lost over time until the 16th century, when it was rediscovered by Chaitanya Mahaprabhu. In the year 1515, Chaitanya Mahaprabhu visited Vrindavana, with the purpose of locating the lost holy places associated with Lord Sri Krishna's transcendent pastimes. Chaitanya wandered through the different sacred forests of Vrindavana in a spiritual trance of divine love. It was believed that by His divine spiritual power, He was able to locate all the important places of Krishna's pastimes in and around Vrindavana.[7] Mira Bai left the kingdom of Mewar and went on pilgrimages. In her last 14 years, Meera lived in a temple called Pracheen Meerabai in Vrindavan. Meera Bai is the most famous female Hindu spiritual poet, whose compositions are still popular throughout North India.

In the last 250 years, the extensive forests of Vrindavan have been subjected to urbanization, first by local Rajas and in recent decades by apartment developers. The forest cover has been whittled away to only a few remaining spots, and the local wildlife, including peacocks, cows, monkeys and a variety of bird species has been virtually eliminated. A few peacocks are left in the city but monkeys and cows can be seen almost everywhere. 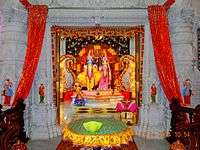 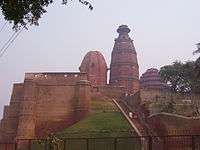 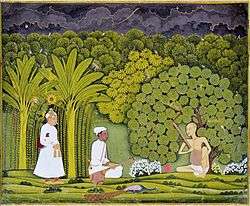 Vrindavan is considered to be a holy place for Vaisnavism tradition of Hinduism. It is a center of Krishna worship and the area includes places like Govardhana and Gokul that are associated with Krishna. Millions of devotees of Radha Krishna visit these places of pilgrimage every year and participate in a number of festivals.[11] According to Bhagavata Purana, Krishna was raised in the cow herding village of Gokul by his foster parents Nanda Maharaj and Yasoda. The Bhagavata Purana describes Krishna's early childhood pastimes in the Vrindavan forest where he, his brother Balarama and his cowherd friends engaged in childhood pranks.

Vrindavan is also known as the "city of widows"[26] due to the large number of widows who move into the town and surrounding area after losing their husbands. There are an estimated 15,000 to 20,000 widows[27][28] who spend time singing bhajan hymns for in bhajanashrams. An organization called Guild of Service was formed to assist these deprived women and children.[26][28] According to a survey report prepared by the government, several homes run by the government and different NGOs for widows.[29]

Vrindavan travel guide from Wikivoyage white and saffron of Vrindavan