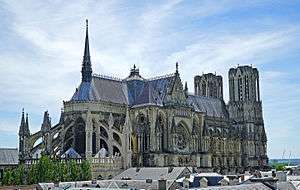 Notre-Dame de Reims (Our Lady of Reims) is the seat of the Archdiocese of Reims, where the kings of France were crowned.[1] The cathedral replaced an older church, destroyed by fire in 1211, that was built on the site of the basilica where Clovis was baptized by Saint Remi, bishop of Reims, in AD 496. That original structure had itself been erected on the site of some Roman baths. A major tourism destination, the cathedral receives about one million visitors annually.[2]

Excavations have shown that the present building occupies roughly the same site as the original cathedral, founded c.400 under the episcopacy of St Nicaise. That church was rebuilt during the Carolingian period and further extended in the 12th century. On 19 May 1051, King Henry I of France and Anne of Kiev were married in the cathedral.[3] Whilst conducting the Council of Reims in 1131, Pope Innocent II anointed and crowned the future Louis VII in the cathedral.[4][5]

On May 6, 1210 the cathedral was damaged by fire and reconstruction started shortly after,[6] beginning at the eastern end. Documentary records show the acquisition of land to the west of the site in 1218, suggesting the new cathedral was substantially larger than its predecessors, the lengthening of the nave presumably being an adaptation to afford room for the crowds that attended the coronations.[7] In 1233 a long-running dispute between the cathedral chapter and the townsfolk (regarding issues of taxation and legal jurisdiction) boiled over into open revolt.[8] Several clerics were killed or injured during the resulting violence and the entire cathedral chapter fled the city, leaving it under an interdict (effectively banning all public worship and sacraments).[9] Work on the new cathedral was suspended for three years, only resuming in 1236 after the clergy returned to the city and the interdict was lifted following mediation by the King and the Pope. Construction then continued more slowly. The area from the crossing eastwards was in use by 1241 but the nave was not roofed until 1299 (when the French King lifted the tax on lead used for that purpose). Work on the west facade took place in several phases, which is reflected in the very different styles of some of the sculptures. The upper parts of the facade were completed in the 14th century, but apparently following 13th century designs, giving Reims an unusual unity of style. 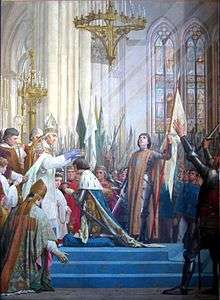 Coronation of Charles VII in 1429

Unusually the names of the cathedral's original architects are known. A labyrinth built into floor of the nave at the time of construction or shortly after (similar to examples at Chartres and Amiens) included the names of four master masons (Jean d'Orbais, Jean-Le-Loup, Gaucher de Reims and Bernard de Soissons) and the number of years they worked there, though art historians still disagree over who was responsible for which parts of the building.[10] The labyrinth itself was destroyed in 1779 but its details and inscriptions are known from 18th century drawings. The clear association here between a labyrinth and master masons adds weight to the argument that such patterns were an allusion to the emerging status of the architect (through their association with the mythical artificer Daedalus, who built the Labyrinth of King Minos). The cathedral also contains further evidence of the rising status of the architect in the tomb of Hugues Libergier (d. 1268, architect of the now-destroyed Reims church of St-Nicaise). Not only is he given the honor of an engraved slab; he is shown holding a miniature model of his church (an honor formerly reserved for noble donors) and wearing the academic garb befitting an intellectual.

Following the death of the infant King John I, his uncle Philip would be hurriedly crowned at Reims, 9 January 1317.[11]

During the Hundred Years' War the cathedral and city were under siege by the English from 1359 to 1360, but the siege failed.[12] In 1380, Reims cathedral would be center of Charles VI's coronation[13] and eight years later Charles would call a council at Reims in 1388 to take personal rule from the control of his uncles.[14] After Henry V, King of England, defeated Charles VI's army at Agincourt, Reims along with most of northern France fell to the English.[15] The English would hold Reims and the Cathedral until 1429 when it was liberated by Joan of Arc which allowed the Dauphin Charles to be crowned king on 17 July 1429.[16] Following the death of Francis I of France, Henry II was crowned King of France on 25 July 1547 in Reims cathedral.[17]

In 1875 the French National Assembly voted £80,000 for repairs of the façade and balustrades. The façade is the finest portion of the building, and one of the great masterpieces of the Middle Ages.

On the outbreak of the First World War, the cathedral was commissioned as a hospital, and troops and arms were removed from its immediate vicinity. German shellfire during the opening engagements on 20 September 1914 burned, damaged and destroyed important parts of the cathedral. Scaffolding around the north tower caught fire, spreading the blaze to all parts of the carpentry superstructure. The lead of the roofs melted and poured through the stone gargoyles, destroying in turn the bishop's palace. Images of the cathedral in ruins were shown during the war by the indignant French, accusing the Germans of the deliberate destruction of buildings rich in national and cultural heritage. [18]

Restoration work began in 1919, under the direction of architect Henri Deneux, a native of Reims; the cathedral was fully reopened in 1938, thanks in part to financial support from the Rockefellers, but work has been steadily going on since. 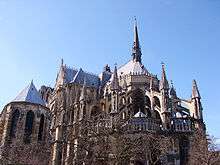 Exterior view of the chevet

The three portals are laden with statues and statuettes; among European cathedrals, only Chartres has more sculpted figures. The central portal, dedicated to the Virgin Mary, is surmounted by a rose window framed in an arch itself decorated with statuary, in place of the usual sculptured tympanum. The "gallery of the kings" above shows the baptism of Clovis in the centre flanked by statues of his successors.

The facades of the transepts are also decorated with sculptures. That on the North has statues of bishops of Reims, a representation of the Last Judgment and a figure of Jesus (le Beau Dieu), while that on the south side has a modern rose window with the prophets and apostles. Fire destroyed the roof and the spires in 1481: of the four towers that flanked the transepts, nothing remains above the height of the roof. Above the choir rises an elegant lead-covered timber bell tower that is 18 m (about 59 feet) tall, reconstructed in the 15th century and in the 1920s. The total exterior length is 149.17 meters and its surface area is 6,650 square meters. 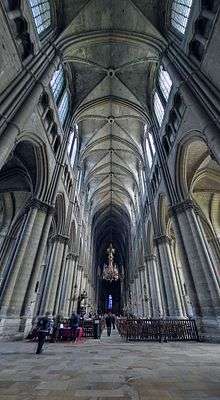 The interior of the cathedral is 138.75 m (about 455 ft) long, 30 m (approx. 98 feet) wide in the nave, and 38 m (about 125 feet) high in the centre. It comprises a nave with aisles, transepts with aisles, a choir with double aisles, and an apse with ambulatory and radiating chapels. It has interesting stained glass ranging from the 13th to the 20th century. The rose window over the main portal and the gallery beneath are of rare magnificence. 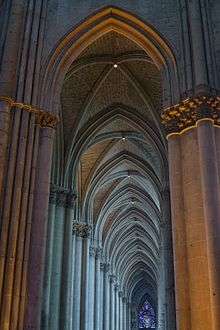 The cathedral possesses fine tapestries. Of these the most important series is that presented by Robert de Lenoncourt, archbishop under François I (1515-1547), representing the life of the Virgin. They are now to be seen in the former bishop's palace, the Palace of Tau. The north transept contains a fine organ in a flamboyant Gothic case. The choir clock is ornamented with curious mechanical figures. Marc Chagall designed the stained glass installed in 1974 in the axis of the apse.

The treasury, kept in the Palace of Tau, includes many precious objects, among which is the Sainte Ampoule, or holy flask, the successor of the ancient one that contained the oil with which French kings were anointed, which was broken during the French Revolution, a fragment of which the present Ampoule contains.

Notre-Dame de Reims cathedral, the former Abbey of Saint-Remi, and the Palace of Tau were added to the list of UNESCO World Heritage Sites in 1991.

In 2011, the city of Reims celebrated the cathedral's 800th anniversary. The celebrations ran from May 6 to October 23. Concerts, street performances, exhibitions, conferences, and a series of evening light shows highlighted the cathedral and its 800th anniversary. In addition, six new stained glass windows designed by Imi Knoebel, a German artist, were inaugurated on June 25, 2011. The six windows cover an area of 128m² and are positioned on both sides of the Chagall windows in the apse of the cathedral.