This is a Korean name; the family name is Cha.

Cha Du-Ri (Hangul: 차두리; born 25 July 1980) is a retired German-born South Korean professional footballer. He played as a right back, right winger, or striker. He is the first Korean player who was born outside of Korea to have played in a FIFA World Cup. Cha's father, Cha Bum-Kun played in the 1986 World Cup. Cha Du-Ri has also played for one of his father's old clubs, Eintracht Frankfurt.[2] During the third-place match of the 2011 AFC Asian Cup against Uzbekistan, Cha captained the national team in place of the regular Korean captain, Park Ji-Sung.

Cha was born in Frankfurt am Main in West Germany, when his father Cha Bum-Kun was starring in the German Bundesliga with Eintracht Frankfurt, and spent his childhood in Germany[2] while his father was playing for Frankfurt and later for Bayer Leverkusen.[2]

Cha started his club career in Germany and had spells with Bayer Leverkusen, Arminia Bielefeld and Eintracht Frankfurt.

Before the 2006–07 season kicked off, Cha Du-Ri changed his position from striker to right wingback for Mainz, but throughout the season, he was hampered with a foot injury that prevented him from joining the starting line-up or even getting some playing time. After the 2006–07 season, Mainz were relegated to 2. Bundesliga, and subsequently after, Cha terminated the contract.

During the 2007 off-season, Cha signed a transfer-free contract with Koblenz in 2. Bundesliga for the 2007–08 season. He also has switched his positions back to right winger, supporting Striker, and the centre forward position, after his failure to adjust to right wingback for Mainz. 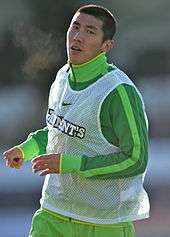 Following interest from Celtic, Cha arrived in Glasgow for a medical on 30 June 2010.[3] In an interview regarding the completion of a move to Parkhead, Cha expressed his desire to compete in an Old Firm derby.[4] Cha signed for Celtic pending approval of a work permit.[4] In doing so he joined up with his national team mate Ki Sung-Yeung.[2]

On 28 July 2010 Cha made his Celtic debut in the UEFA Champions League Third qualifying round against Braga, a 3–0 defeat and on 14 August made his SPL debut against Inverness Caledonian Thistle in a 1–0 win over the Highland side.[5] Cha scored his first Celtic goal against St Johnstone in the SPL on 26 December 2010.[6] On 25 March 2012, Cha was sent off in the Old Firm derby, which Celtic lost 3–2.[7]

On 25 March 2013, Cha agreed a two-year contract with FC Seoul in K League Classic. On 31 October 2015, Cha announced his retirement after winning the final of Korean FA Cup despite of the rest of 3 matches of 2015 K League Classic.

Cha was noticed by coach Guus Hiddink when the national team played a practice match against Korea University. Strong, aggressive and pacey, he was still playing amateur football when he made his debut for the South Korea national team in 2001. Cha was included in the South Korea football team for 2002 World Cup, even though his playing time was limited to off-the-bench appearances. South Korea surprised the football world by advancing to the semi-finals of the tournament, beating the likes of Portugal and Italy along the way. Their fairy-tale run ended in the semi-finals when they were eliminated after losing 1–0 to Germany, with Michael Ballack netting the only goal. Cha played in the 2004 Asian Cup, scoring a goal in the game against Kuwait. However they were eliminated in the quarterfinals after a 4–3 loss to Iran.

Cha was left off Korea's roster for the 2006 World Cup, and instead acted as a colour commentator for MBC's live telecasts of the tournament's games alongside his father. Pim Verbeek, South Korea's head coach, added him into his squad for the qualification of the 2007 Asian Cup but was not selected for the final team. On 14 October 2009, Cha was called back to international duty against Senegal. It was the first time Cha had been selected for the Korean national team since late 2006. In the 2010 World Cup, Cha played as an attacking right-back during the first half of the game against Greece, venturing forward and providing an attacking threat on the right side. During the second half, South Korea were leading so he stayed back in a more defensive role for his side. He did not take part in the following qualifying match against Argentina and South Korea lost 4–1. He was influential in the next match draw against Nigeria.[9] On 26 June, Cha played his 50th game for South Korea in a 1–2 loss against Uruguay. Cha was selected for the final team for the 2011 Asian Cup and started in every single game as the team made it to the semifinals before losing to Japan via penalties following a dramatic 2–2 draw. He was made captain of the team in the third place match against Uzbekistan, replacing Park Ji-Sung, who had retired from international duty following the loss to Japan. Cha was not selected for the 2014 World Cup but was called up to play in the 2015 Asian Cup. Cha played his last international cap against Australia in the tournament's final match where Australia won 2–1. He announced his international retirement after the match. However he was called up for a final international match in a friendly against New Zealand, where he received a standing ovation following his substitution at half time.

Cha married his wife Shin Hye-Sung (신혜성), the daughter of a wealthy hotel magnate, in 2008. Their daughter, the first of two children, was born in February 2010. He is the son of Cha Bum-Kun, who is regarded as the best football player in Korean history.[2] Cha reads, writes, and speaks fluent Korean, German and Dutch. In April 2013, Cha filed for divorce from his wife.[10]