This is a Korean name; the family name is Son.

Son finished his development at Hamburger SV, where he made his debut in the German Bundesliga in 2010. In 2013, he moved to Bayer Leverkusen for a club record €10 million, and played for the club in the UEFA Europa League and UEFA Champions League. Two years later, he signed for Tottenham for £22 million, becoming the most expensive Asian player in history.[3]

A full international since 2010, Son has represented South Korea at the 2014 FIFA World Cup and the AFC Asian Cup in 2011 and 2015, helping them finish as runners-up in the latter. 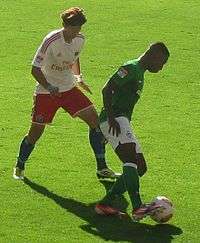 In 2008, Son dropped out of Haiden High School (formerly FC Seoul U-18 Team)[4] and joined Hamburger SV's youth academy at the age of 16.[5] He eventually scored a goal in six matches[6] during the 2009–10 season for Hamburger SV II.[7] He was impressive in the 2010–11 pre-season, leading the team with nine goals and signed his first professional contract on his 18th birthday.[8] After scoring against Chelsea in August, he was injured for two months due to a foot injury. He returned on 30 October 2010 to score his first league goal, against 1. FC Köln in the 24th minute. The goal made Son the youngest Hamburg player to have scored a goal in Bundesliga at 18 years, thus breaking the record held by Manfred Kaltz.[9][10]

Son signed a new deal with Hamburg which would keep him at the club until 2014. It was stated that Son had what it takes to become the next Cha Bum-kun, a legendary Bundesliga forward and fellow South Korean.[11] Son scored three goals in 14 matches in all competition during the 2010–11 season.[12]

During the 2011–12 pre-season, Son went goalless for nine games.[13] After missing the opening game due to a fever, Son scored two goals within three games.[14] Unfortunately, mirroring last season, Son picked up an ankle injury in the 4–3 loss to 1. FC Köln on 27 August and was initially projected to be out of action for four to six weeks.[15] His recovery was quicker than expected, however, and he returned to action only three weeks later as a substitute in the 1–0 loss against Borussia Mönchengladbach on 17 September. Over the course of the 2011–12 season, he made 30 appearances for Hamburg and scored five goals,[16] including crucial goals against Hannover 96 and 1. FC Nürnberg at the end of the season to help ensure that Hamburg remained in the Bundesliga.[17]

Following Hamburger SV's 2012–13 off-season moves, which saw the transfers of the team's strikers Mladen Petrić and Paolo Guerrero to Fulham and Corinthians respectively, manager Thorsten Fink chose to place Son in a starting role for the team. The 2012–13 season was a breakthrough season for Son as he scored two goals in the away fixture against Borussia Dortmund on 9 February 2013, helping his side to a 4–1 victory. Son was chosen Mann des Tages (Man of the Match) by Kicker.[18] His frequent goals against Dortmund earned him the nickname "Bee-farmer", referring to the opponents' mascot.[19] On 14 April, Son netted two goals in a 2–1 win against Mainz 05. He finished the season with 12 goals, becoming the fourth Asian footballer to achieve double-digits in goals in the "Big 3" European football leagues.[20] He finished the 2012–13 season with 12 goals in 34 matches in all competitions.[21]

On 13 June 2013, Bayer Leverkusen confirmed Son's transfer for reportedly €10 million, the highest transfer fee the club has ever paid in its history. He agreed to a five-year deal with the team.[22] Son adjusted quickly to his new club in the pre-season, scoring three goals in his first three appearances for the team in exhibition matches (against 1860 Munich, Udinese and KAS Eupen respectively).[23]

On 9 November 2013, Son scored a hat-trick for Leverkusen in a 5–3 win against his former club Hamburgers SV.[24] On 7 December, Son scored a crucial goal against Borussia Dortmund to put his club just four points off the summit of the Bundesliga. On 10 March 2014, Son scored another goal against Werder Bremen ensuring his team a spot for the 2014–15 UEFA Champions League.[25] He finished the 2013–14 season with 12 goals in 43 matches.[26]

Son started the 2015–16 season with Bayer Leverkusen. He made a league appearance[29] and a Champions League qualifying match.[7]

On 28 August 2015, Son joined Premier League side Tottenham Hotspur for £22 million (€30 million) on a five-year contract, subject to work permit and international clearance.[30][31] Upon his signing, he became the most expensive Asian player in football history.[3] the record had been held since 2001 by Japanese Hidetoshi Nakata, who transferred from Roma to Parma for €25 million.[32]

Son made his debut on 13 September away to Sunderland, being replaced by Andros Townsend in the 62nd minute of a 1–0 win.[33] In Tottenham's first game of the 2015–16 UEFA Europa League on 17 September, Son netted his first two goals for the club in a 3–1 win against Qarabağ FK.[34] Three days later, he scored his first Premier League goal, against Crystal Palace at White Hart Lane, netting in the 68th minute to give Tottenham their first home Premier League win of the season.[35] On 28 December, Son replaced Tom Carroll in the 80th minute and scored Tottenham's winning goal in the 89th minute. On 2 May, he scored the second goal against Chelsea in a crucial game to give Spurs hope of winning the Premier League. Chelsea equalised in the second half, however, handing over the title to Leicester City.[36]

Before the season, Son reportedly asked Spurs manager Mauricio Pochettino for permission to leave Tottenham in an attempt to get more playing time, but was instead given a chance to fight for his place at Spurs.[37] On 10 September 2016, Son scored two goals and created a third in his first appearance of the season, in a 4–0 win against Stoke City.[38] Son followed that performance up with a second brace, coming at Middlesbrough on 24 September, earning his team a 1–2 victory.[39] Upon equaling his league goal total from the previous season in 25 fewer games, Son was hailed by Pochettino as "a different person – he's more mature and he knows the league and he's settled in fantastically now."[40] Son continued his excellent run of form with his fifth goal in five games on 27 September in the Champions League. Playing at CSKA Moscow, Son slipped a shot past goalkeeper Igor Akinfeev for the only goal of the game.[41] On 14 October, Son was announced Premier League Player of the Month for the month of September, being the first South Korean and first Asian to receive the award.[42]

On 24 December 2010, Son was named in South Korea's squad for the 2011 AFC Asian Cup,[43] making his debut for the national team in a pre-tournament friendly against Syria on 30 December.[44] At the tournament finals, Son scored his first international goal during a 4– 1 group stage defeat of India.[45]

On 7 October 2011, after initially missing the first two games of South Korea's 2014 FIFA World Cup qualification campaign on 2 and 6 September 2011 due to an ankle injury, Son played in a friendly against Poland, and was again featured in the 11 October World Cup qualifier against the United Arab Emirates.[46][47] His selection for national team play was a point of concern for Son's father, however, who caused a stir by asking the Korea Football Association not to select his son for the national team in the immediate future so he can rest and mature more as a player. Cho Kwang-rae, then the South Korea head coach, responded by saying that he would continue to call up Son when needed.[48]

Son being interviewed after a friendly against Haiti in September 2013

Son turned down the opportunity to participate in the 2012 London Olympics, opting to concentrate on his club career at Hamburger SV. Son was quoted as saying, "In Korea, an Olympic appearance has a special meaning, but I want to speed up for Hamburg. What matters is to pour all my time into team training."[49] Son did, however, play for the national team in the autumn of 2012 for two 2014 FIFA World Cup qualifiers against Lebanon and Iran,[50] and has become a regular call-up in friendlies and World Cup qualifying matches in 2013. In the World Cup qualifier against Qatar on 23 March 2013, Son came on as a substitute in the 81st minute and scored the winning goal in the 96th minute.[51]

In June 2014, Son was named in South Korea's squad for the 2014 World Cup.[52] On 22 June, he scored in a 4–2 defeat to Algeria in the team's second group match.[53] Following the exit, Son was one of the few players who were praised for their performances at the World Cup.

The Korea Football Association requested Bayer Leverkusen to allow Son to play in the 2014 Asian Games, as winning the gold medal at the tournament would grant Son exemption from military service. Despite Son affirming his interest and the KFA's efforts, his club at the time, Bayer Leverkusen, refused to release him, as his absence would mean the team would lose him for at least six games.[54]

Son was selected for South Korea for the 2015 AFC Asian Cup in Australia. At the quarter-final stage, he scored both of the team's goals in the 2–0 extra time defeat of Uzbekistan.[55] In the final against the hosts, he equalised in added time, but his team lost 2–1 after extra time.[56] He was chosen as one of three forwards in the Team of the Tournament.[57]

On 3 September 2015 at the Hwaseong Stadium, Son scored a hat-trick in an 8–0 home win over Laos in the second round of qualification for the 2018 World Cup.[58]

In June 2016, Son was named as an over-age player in South Korea's squad for the 2016 Rio Summer Olympics. Son amassed two goals in the group stages with a goal against Fiji and another against Germany, helping his team to top the group with two wins and a draw. South Korea was eliminated by Honduras in the quarterfinals, with Son missing a handful of chances.[59]

Son is known as a versatile attacker due to his ability to use both feet equally well; although he often played the role of a second striker with Hamburg, he can play either as a second striker as well as even a first striker. Son has confirmed this, saying, "I don't care where I play. The main thing is I'm in the game. I can play as a second striker or behind. What the coach says, I'll do. I don't have a favorite position. I'll be anywhere and always on the throttle."[65] Other strengths of Son include his explosive pace, dribbling abilities, composure in front of goal, and hard-working nature.[66]

Son came through the academy at FC Seoul, the same club that former Spurs defender Lee Young-pyo played for.[67] Moreover, Son was a ball boy in an FC Seoul home match in 2008 when he was a FC Seoul youth player.[68] At that time, his role model was midfielder Lee Chung-yong, who now plays for Crystal Palace.[69][70]