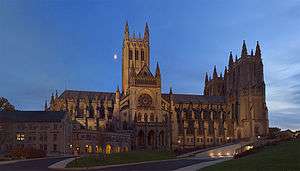 Ecclesiology usually now refers to the theological study of the Christian Church. The word was an English neologism of the later 1830s, however; and, within a few years, it was defined as the science of the building and decoration of church buildings; it may still be used in this sense.

In its theological sense ecclesiology deals with the origins of Christianity, its relationship to Jesus, its role in salvation, its polity, its discipline, its destiny, and its leadership. Since different ecclesiologies give shape to very different institutions, the word may also refer to a particular church or denomination’s character, self-described or otherwise – hence phrases such as Roman Catholic ecclesiology, Lutheran ecclesiology, and ecumenical ecclesiology.

The roots of the word ecclesiology come from the Greek ἐκκλησίᾱ, ekklēsiā (Latin ecclesia) meaning "congregation, church"[notes 1] and -λογία, -logia, meaning "words", "knowledge", or "logic", a combining term used in the names of sciences or bodies of knowledge.

The similar word ecclesialogy first appeared in the quarterly journal The British Critic in 1837, in an article written by an anonymous contributor[3] who defined it thus:

We mean, then, by Ecclesialogy, a science which may treat of the proper construction and operations of the Church, or Communion, or Society of Christians; and which may regard men as they are members of that society, whether members of the Christian Church in the widest acceptation of the term, or members of some branch or communion of that Church, located in some separate kingdom, and governed according to its internal forms of constitution and discipline.[4]

However, in volume 4 of the Cambridge Camden Society's journal The Ecclesiologist, published in January 1845 that society (the CCS) claimed that they had invented the word ecclesiology:[3]

...as a general organ of Ecclesiology; that peculiar branch of science to which it seems scarcely too much to say, that this very magazine gave first its being and its name.[5]

The Ecclesiologist was first published in October 1841 and dealt with the study of the building and decoration of churches. It particularly encouraged the restoration of Anglican churches back to their supposed Gothic splendour and it was at the centre of the wave of Victorian restoration that spread across England and Wales in the second half of the 19th century. Its successor Ecclesiology Today is still, as of 2011, being published by The Ecclesiological Society (successor to the CCS, now a registered charity).[6]

The situation regarding the etymology has been summed up by Alister McGrath: "'Ecclesiology' is a term that has changed its meaning in recent theology. Formerly the science of the building and decoration of churches, promoted by the Cambridge Camden Society, the Ecclesiological Society and the journal The Ecclesiologist, ecclesiology now stands for the study of the nature of the Christian church."[7]

Roman Catholic ecclesiology today has a plurality of models and views, as with all Roman Catholic Theology since the acceptance of scholarly Biblical criticism that began in the early to mid 20th century. This shift is most clearly marked by the encyclical Divino afflante Spiritu in 1943. Avery Robert Cardinal Dulles, S.J. contributed greatly to the use of models in understanding ecclesiology. In his work Models of the Church, he defines five basic models of Church that have been prevalent throughout the history of the Catholic Church. These include models of the Church as institution, as mystical communion, as sacrament, as herald, and as servant.[8]

The ecclesiological model of Church as an Institution holds that the Catholic Church alone is the "one, holy, catholic and apostolic Church", and is the only Church of divine and apostolic origin. This view of the Church is dogmatically defined Catholic doctrine, and is therefore de fide. In this view, the Catholic Church— composed of all baptized, professing Catholics, both clergy and laity—is the unified, visible society founded by Christ himself, and its hierarchy derives its spiritual authority through the centuries, via apostolic succession of its bishops, most especially through the bishop of Rome (the Pope) whose successorship comes from St. Peter the Apostle, whom Christ gave "the keys to the Kingdom of Heaven". Thus, the Popes, in the Catholic view, have a God-ordained universal jurisdiction over the whole Church on earth. The Catholic Church is considered Christ's mystical body, and the universal sacrament of salvation, whereby Christ enables human to receive sanctifying grace.

The model of Church as Mystical Communion draws on two major Biblical images, the first of the "Mystical Body of Christ" (as developed in Paul's Epistles) and the second of the "People of God." This image goes beyond the Aristotelian-Scholastic model of "Communitas Perfecta" held in previous centuries. This ecclesiological model draws upon sociology and articulations of two types of social relationships: a formally organized or structured society (Gesellschaft) and an informal or interpersonal community (Gemeinschaft). The Roman Catholic theologian Arnold Rademacher maintained that the Church in its inner core is community (Gemeinschaft) and in its outer core society (Gesellschaft). Here, the interpersonal aspect of the Church is given primacy and that the structured Church is the result of a real community of believers. Similarly, Yves Congar argued that the ultimate reality of the Church is a fellowship of persons. This ecclesiology opens itself to ecumenism[9] and was the prevailing model used by the Second Vatican Council in its ecumenical efforts. The Council, using this model, recognized in its document Lumen gentium that the Body of Christ subsists in a visible society governed by the Successor of Peter and by the Bishops in communion with him, although many elements of sanctification and of truth are found outside of its visible structure.[10]

From the Orthodox perspective, the Church is one, even though She is manifested in many places. Orthodox ecclesiology operates with a plurality in unity and a unity in plurality. For Orthodoxy there is no 'either / or' between the one and the many. No attempt is made, or should be made, to subordinate the many to the one (the Roman Catholic model), nor the one to the many (the Protestant model). It is both canonically and theologically correct to speak of the Church and the churches, and vice versa.

Martin Luther argued that because the Catholic Church had "lost sight of the doctrine of grace", it had "lost its claim to be considered as the authentic Christian church." ; this argument was open to the counter-criticism from Catholics that he was thus guilty of schism and the heresy of Donatism, and in both cases therefore opposing central teachings of the early Church and most especially the Church father St. Augustine of Hippo.[11] It also challenged the Catholic doctrine that the Catholic Church was indefectible and infallible in its dogmatic teachings.

A key "Radical Reformer" was Menno Simons, known as an "Anabaptist". He wrote:

They verily are not the true congregation of Christ who merely boast of his name. But they are the true congregation of Christ who are truly converted, who are born from above of God, who are of a regenerate mind by the operation of the Holy Spirit through the hearing of the divine Word, and have become the children of God, have entered into obedience to him, and live unblamably in his holy commandments, and according to his holy will with all their days, or from the moment of their call.[12]

This was in direct contrast to the hierarchical, sacramental ecclesiology that characterised the incumbent Roman Catholic tradition as well as the new Lutheran and other prominent Protestant movements of the Reformation.

Some other Radical Reformation ecclesiology holds that "the true church [is] in heaven, and no institution of any kind on earth merit[s] the name 'church of God.'"[11]

The Church of Jesus Christ of Latter-day Saints has a work simply called the Handbook that unifies creed, ecclesiology, and polity for that faith.