Hambantota (Sinhalese: හම්බන්තොට, Tamil: அம்பாந்தோட்டை) is the main town in Hambantota District, Southern Province, Sri Lanka. This underdeveloped area was hit hard by the 2004 Indian Ocean tsunami and is undergoing a number of major development projects including the construction of a new sea port and international airport finished in 2013. These projects and others such as Hambantota Cricket Stadium are said to form part of the government's plan to transform Hambantota into the second major urban hub of Sri Lanka, away from Colombo.[1]

When the Kingdom of Ruhuna was established it received many travellers and traders from Siam, China and Indonesia who sought anchorage in the natural harbor at Godawaya, Ambalantota. The ships or large boats these traders travelled in were called “Sampans” and "thota" means port or anchorage so the port where sampans anchor came to be known as “Sampantota” (which is now known as Godawaya). After some time the area became to be called “Hambantota”.[2]

Hambantota District is part of the traditional south known as Ruhuna. In ancient times this region, especially Hambantota and the neighboring areas was the centre of a flourishing civilization. Historical evidence reveals that the region in that era was blessed with fertile fields and a stupendous irrigation network. Hambantota was known by many names ‘Mahagama’, ‘Ruhuna’ and ‘Dolos dahas rata’.

About 200 BC, the first Kingdom of Sri Lanka was flourishing in the north central region of Anuradhapura.

After a personal dispute with his brother, King Devanampiyatissa of Anuradhapura, King Mahanaga established the Kingdom of Ruhuna in the south of the island. This region played a vital role in building the nation as well as nurturing the Sri Lankan Buddhist culture. Close to Hambantota, the large temple of Tissamaharama was built to house a sacred tooth relic.[3]

Around the years of 1801 and 1803, the British built a Martello tower on the tip of the rocky headland alongside the lighthouse overlooking the sea at Hambantota. The builder was a Captain Goper, who built the tower on the site of an earlier Dutch earthen fort. The tower was restored in 1999, and in the past, formed part of an office of the Hambantota Kachcheri where the Land Registry branch was housed. Today it houses a fisheries museum.

From 2 August to 9 September 1803, an Ensign J. Prendergast of the regiment of Ceylon native infantry was in command of the British colony at Hambantota during a Kandian attack that he was able to repel with the assistance of the snow ship Minerva.[4] Earlier, HMS  Wilhelmina had touched there and left off eight men from the Royal Artillery to reinforce him.[5] This detachment participated in Prendergast's successful defense of the colony.[6] If the tower at Hambantota was at all involved in repelling any attack this would be one of the only cases in which a British Martello tower had been involved in combat.

Leonard Woolf, future husband of Virginia Woolf, was the British colonial administrator at Hambantota between 1908 and 1911.

Hambantota features a tropical wet and dry climate (Aw) under the Köppen climate classification. There is no true dry season, but there is significantly less rain from January–March and again from June–August. The heaviest rain falls in October and November. The city sees on average roughly 1,050 millimetres (41 in) of precipitation annually. Average temperatures in Hambantota change little throughout the year, ranging from 26.3 °C (79.3 °F) in January to 28.1 °C (82.6 °F) in April and May.

A cement grinding and bagging factory is being set up, as well as fertiliser bagging plants. Large salt plains are a prominent feature of Hambantota. The town is a major producer of salt.[3]

Magam Ruhunupura International Conference Hall(MRICH), located at Siribopura, was opened by President Mahinda Rajapaksa in November,2013.The MRICH situated in a 28-acre plot of land in Siribopura, Hambantota is Sri Lanka’s second international conference hall.The main hall has 1,500 seats and there are three additional halls with a seating capacity of 250 each. The conference hall is fully equipped with modern technical facilities and a vehicle park for 400 vehicles and also has a helipad for helicopter landing.The conference hall was constructed by the Urban Development Authority and the Korean international Corporation at a cost of US$15.3 million. The Commonwealth Youth Forum (CYF) that was held from November 10–14, 2013 was the first international conference held at the venue.[11] 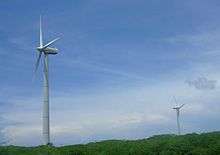 The Hambantota Wind Farm is the first wind farm in Sri Lanka (there are two more commercial wind farms).[12] It's a pilot project to test wind power generation in the island nation.[13] Wind energy development faces immense obstacles such as poor roads and an unstable power grid. 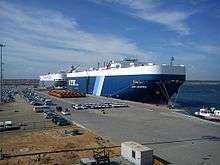 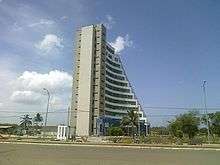 Hambantota is the selected site for a new international port, the Port of Hambantota. It is scheduled to be built in three phases, with the first phase due to be completed by the end of 2010 at a cost of $360 million.[14] As part of the port, a $550 million tax-free port zone is being started, with companies in India, China, Russia and Dubai expressing interest in setting up shipbuilding, ship-repair and warehousing facilities in the zone. It is expected to be completed by November 2010. When all phases are fully complete, it will be able to berth 33 vessels, which would make it the biggest port in South Asia.[15]

The involvement of Chinese companies in the development of Hambantota port have provoked claims by some analysts that it is part of China's String of Pearls strategy. Other analysts have argued that it would not be in Sri Lanka's interests to allow the Chinese navy access to the port and in any event the exposed nature of the port would make it of dubious value to China in time of conflict.[17]

Terminal building of the airport.

A2 highway connects Colombo with Hambantota town through Galle and Matara.

In support of the new harbour, construction work started in 2006 on the Matara-Kataragama Railway Line project, a broad gauge railway being implemented at an estimated cost of $91 million.[18] The Southern Expressway from Kottawa to Matara will be connected to Hambantota via Beliatta.

The Mahinda Rajapaksa International Stadium, with a capacity of 35,000 seats, was built for the 2011 Cricket World Cup. The cost of this project is an estimated Rs. 900 million (US$7.86m). It's located in a beautiful location. Sri Lanka Cricket is seeking relief from its debts incurred in building infrastructure etc. for the 2011 Cricket World Cup.[1] Hambantota had bid for the 2018 Commonwealth Games, however it lost to the Australian city of Gold Coast. Hambantota was formerly planned to be the host of the 2017 Asian Youth Games.

A new tele-cinema village is being constructed at Ranmihitenna. It consists of three stages and will be constructed at a cost of 2 billion rupees. The first stage, opened on 30 March 2010 at a cost of 600 million rupees consists of an administration building, accommodation hall (with facilities for 96 individuals), a large studio, 31 sets, three showrooms for costumes, two seminar halls, two libraries, kitchens, back lots, workshops and common facilities.

Sri Lanka has commenced construction of an exclusive entertainment island in the southern Hambantota coast and it will be constructed with rock and soil unearthed from the second phase of the construction of the seaport.The man-made island with an extent of about 48 hectares would be established in Hambantota in close proximity to the Magam Ruhunupura Mahinda Rajapaksa port.The new island would be an entertainment arena only and as a result entry would be exclusive to foreigners and Locals will only be permitted entry only on special permits.[19] Several local and foreign investors have responded positively to invest in the proposed artificial island that is being built in Hambantota. Several hotels, restaurants, duty-free shopping malls, recreational and tourism facilities are proposed to be built at this artificial island.[20]

Hambantota is twinned with: