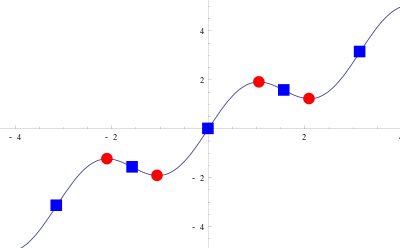 The abscissae("x-coordinates") of the red circles are stationary points; the blue squares are inflection points.

The interest of this notion lies in the fact that the points where the function has local extrema are critical points.

In other words, the critical points are those where the implicit function theorem does not apply.

The notion of a critical point allows the mathematical description of an astronomical phenomenon that was unexplained before the time of Copernicus. A stationary point in the orbit of a planet is a point of the trajectory of the planet on the celestial sphere, where the motion of the planet seems to stop before restarting in the other direction. This occurs because of a critical point of the projection of the orbit into the ecliptic circle.

This means that the tangent of the curve is parallel to the y-axis, and that, at this point, g does not define an implicit function from x to y (see implicit function theorem). If (x0, y0) is such a critical point, then x0 is the corresponding critical value. Such a critical point is also called a bifurcation point, as, generally, when x varies, there are two branches of the curve on a side of x0 and zero on the other side.

then x = 0 is the unique critical point, with critical value 1. The critical points of the circle for the projection parallel to the y-axis correspond exactly to the points where the derivative of f is not defined.

Sendov's conjecture asserts that, if all of a function's roots lie in the unit disk in the complex plane, then there is at least one critical point within unit distance of any given root.

Critical points of an implicit curve

Thus, we consider a curve C defined by an implicit equation

where f is a differentiable function of two variables, commonly a bivariate polynomial. The points of the curve are the points of the Euclidean plane whose Cartesian coordinates satisfy the equation. There are two standard projections

A point of C is critical for

, if the tangent to C exists and is parallel to the y-axis. In that case, the images by

of the critical point and of the tangent are the same point of the x-axis, called the critical value. Thus a point is critical for

if its coordinates are solution of the system of equations

This implies that this definition is a special case of the general definition of a critical point, which is given below.

The definition of a critical point for

is similar. One should note that, if C is the graph of a function

if and only if x is a critical point of f, and that the critical values are the same.

are exactly the points where the implicit function theorem does not apply.

Use of the discriminant

When the curve C is algebraic, that is when it is defined by a bivariate polynomial f, then the discriminant is a useful tool to compute the critical points.

Here we consider only the projection

by exchanging x and y.

More precisely, a simple root of

is either a critical value of

A multiple root of the discriminant correspond either to several critical points or inflection asymptotes sharing the same critical value, or to an critical point which is also an inflection point, or to a singular point.

If the function is smooth, or, at least twice continuously differentiable, a critical point may be either a local maximum, a local minimum or a saddle point. The different cases may be distinguished by considering the eigenvalues of the Hessian matrix of second derivatives.

By Fermat's theorem, all local maxima and minima of a differentiable function occur at critical points. Therefore, to find the local maxima and minima, it suffices, theoretically, to compute the zeros of the gradient and the eigenvalues of the Hessian matrix at these zeros. This does not work well in practice because it requires the solution of a nonlinear system of simultaneous equations, which is a difficult task. The usual numerical algorithms are much more efficient for finding local extrema, but cannot certify that all extrema have been found. In particular, in global optimization, these methods cannot certify that the output is really the global optimum.

When the function to minimize is a multivariate polynomial, the critical points and the critical values are solutions of a system of polynomial equations, and modern algorithms for solving such systems provide competitive certified methods for finding the global minimum.

Critical point of a differentiable map

Some authors[5] give a slightly different definition: a critical point of f is a point of Rm where the rank of the Jacobian matrix of f is less than n. With this convention, all points are critical when m < n.

These definitions extend to differential maps between differentiable manifolds in the following way. Let

be a differential map between two manifolds V and W of respective dimensions m and n. In the neighborhood of a point p of V and of f(p), charts are diffeomorphisms

The point p is critical for f if

This definition does not depend on the choice of the charts because the transitions maps being diffeomorphisms, their Jacobian matrices are invertible and multiplying by them does not modify the rank of the Jacobian matrix of

If M is a Hilbert manifold (not necessarily finite dimensional) and f is a real-valued function then we say that p is a critical point of f if f is not a submersion at p.[6]

Critical points are fundamental for studying the topology of manifolds and real algebraic varieties. In particular, they are the basic tool for Morse theory and catastrophe theory.

The link between critical points and topology already appears at a lower level of abstraction. For example, let

and P be a point outside

The square of the distance to P of a point of

is a differential map such that each connected component of

contains at least a critical point, where the distance is minimal. It follows that the number of connected components of

is bounded above by the number of critical points.

In the case of real algebraic varieties, this observation associated with Bézout's theorem allows us to bound the number of connected components by a function of the degrees of the polynomials that define the variety.