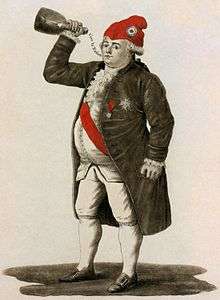 James Monroe, the last U.S. President who dressed according to the style of the late 18th century, with his Cabinet in 1823. The president wears knee breeches, while his secretaries wear long trousers.

Culottes are items of clothing worn on the lower half. The case of culottes meaning split skirts, historical men's breeches, or women's under-pants is an example of fashion-industry words taken from designs across history, languages and cultures, then using them to describe different garments, often creating confusion among historians, and readers. The French word culotte is (a pair of) panties, pants, knickers, trousers, shorts, or (historically) breeches; derived from the French word culot, meaning the lower-half of a thing, the lower garment in this case.

In English-speaking history culottes were originally the knee-breeches commonly worn by gentlemen of the European upper-classes from the late Middle Ages or Renaissance through the early nineteenth century. The style of tight trousers ending just below the knee was popularized in France during the reign of Henry III (1574–1589).[1] Culottes were normally closed and fastened about the leg, to the knee, by buttons, a strap and buckle, or a draw-string. During the French Revolution of 1789–1799, working-class revolutionaries were known as the "sans-culottes" – literally, "without culottes" – a name derived from their rejection of aristocratic apparel.[2] In the United States, only the first five Presidents, from George Washington through James Monroe, wore culottes according to the style of the late 18th century.[3][4]

European Military uniforms incorporated culottes as a standard uniform article, the lower leg being covered by either stockings, leggings, or knee-high boots. Culottes were a common part of military uniforms during the European wars of the eighteenth-century (the Great Northern War, the War of the Spanish Succession, the War of the Austrian Succession, the Seven Years' War, the Franco-British Colonial Wars, and the American Revolution).

Modern English use of the word culottes describes a split or bifurcated skirt[5] or any garment which "hangs like a skirt, but is actually pants."[1] During the Victorian Era (mid- to late-nineteenth century European culture) long split skirts were developed for horseback riding so that women could sit astride a horse with a man's saddle rather than riding side-saddle. Horse-riding culottes for women were controversial because they were used to break a sexual-taboo against women riding horses when they were expected to hide their lower limbs at all times. Later, split skirts were developed to provide women more freedom to do other activities as well, such as gardening, cleaning, bike riding, etc. and still look like one is wearing a skirt.[6]

Culottes are used in school uniforms for girls. They can be used along with skirts, or they may be used as a replacement for skirts. Culottes are worn as part of a uniform mainly to primary and middle schools. Culottes were also part of the uniform of UK Brownie Guides [7] up until recently, when the uniform was modernised and the traditional brown culottes (and the navy blue culottes worn by the Girl Guides) were replaced. 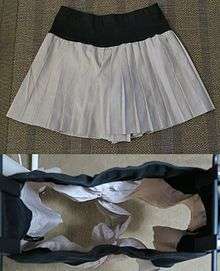 In place of the term culotte, the term skort (a portmanteau for skirt and shorts) is more widely used in some areas. While some garments sold as culottes resemble short trousers, to truly be a skort it needs to look like a skirt. Thus, they differ from trousers or shorts by being much fuller at the bottom (hem) than at the waist. A skort is shorts that have a front covering to resemble a skirt[8] or short pant legs with a same length or longer skirt sewn over the top.[9]

Some culottes have a part sewn over only the front, some are shorts with a skirt sewn over them. While these may not be completely the same as skorts, they are often called by either name, so either term can apply.

The term "culottes" in French is now used to describe women's panties, an article of clothing that has little or no relation to the historic men's culotte breeches, except that in French, calling something "culottes" is like calling them "bottoms". The historical French term "sans-culottes" which was once the rejection of aristrocrats' breeches, is now used colloquially to mean the same as an English colloquialism "going commando" or not wearing under-pants.[10]