This article is about the piece of clothing. For the military term, see Frocking. 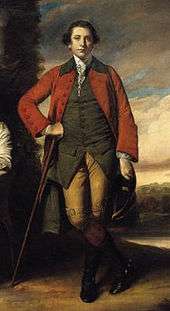 18th century man in a frock, a coat with a flat collar. 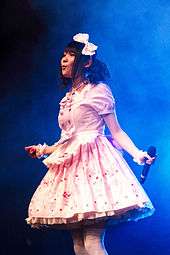 Frock has been used since Middle English as the name for an article of clothing for men and women. In Standard and World English the word is used as an alternative term for a girl's or woman's dress. In Australia it is frequently used this way, with the phrase "to frock up" meaning to wear a formal dress or gown for a special occasion.[1]

Originally, a frock was a loose, long garment with wide, full sleeves, such as the habit of a monk or priest, commonly belted. (This is the origin of the modern term defrock or unfrock, meaning "to eject from the priesthood".)

The term has been continually applied to various types of clothing, generally denoting a loosely fitted garment:

The precise historical evolution of the frock after the second half of the 18th century is obscure, however it is likely that the frock was gradually supplanted by the frock coat in the early 19th century, eventually being relegated to evening dress. The frock coat in turn became cut away into the modern coat, giving us the two modern coats with tails.

A frock coat is a men's coat style of the 19th century, characterized by full skirts reaching to the lower thigh or knee. Despite the similarity in the name, the frock coat should be regarded as being a distinct garment quite separate from the frock. In the French language the frock coat is called 'une redingote' (from English "riding coat"), and so unlike the English language implies no immediate relationship to the frock which is called 'une fraque'. Indeed, the modern French word for a tail coat is "une frac" which better betrays the historical relationship between the tail coat and the frock. In construction the frock coat could scarcely be more different from the frock for unlike the latter it is usually double breasted, lacks any pockets, lacks a high collar, has V-shaped lapels, is closely fitted and is constructed with a waist seam.

A frock motor is a hub motor frequently fitted to electric bicycles. Unlike belt or chain driven motors which can pose a hazardous entanglement risk to those wearing long or loose garments, the hub motor is laced into the center of the bicycle's wheel. With no fast moving parts near the rider's legs it poses little threat to those wearing frock-like garments. Frock motors are either internally geared or direct drive and come in various sizes depending on their power output. They are the most common type of electric bicycle motor and are fitted to millions of bicycles throughout China and around the world.