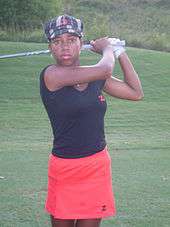 A skort is generally a pair of shorts with a fabric panel resembling a skirt covering the front, although some may be skirts with a pair of integral shorts hidden underneath.[1]

The term "skort" (a portmanteau of skirt and shorts) is used idiomatically in some regions. While some garments sold as culottes resemble short trousers, to be a skort they need to look like skirts. They are distinguished from trousers or shorts by a fuller cut at the bottom (hem) than at the waist.

Skorts were developed to provide more freedom to do activities such as sports, gardening, cleaning, or bike riding, and give the appearance of a skirt.

Montgomery Ward claimed in their 1959 Spring/Summer catalog to have invented the garment they called a skort. It was a short knife or accordion pleated skirt with an attached bloomer. Years later, the term was applied to a pair of shorts with a flap of fabric across the front (and often the back) making the garment appear to be a skirt. In recent years, the term skort has been given to any skirt with an attached pair of shorts.

Skorts are popular in sports such as field hockey, tennis, golf, ten-pin bowling and camogie, and are often part of girls' athletic uniforms.

Women began to play golf in large numbers in the 1960s, which led to the development of the famous Leon Levin "Q" skirt or "skort", which offered the freedom of shorts and soft lines of a skirt. The article became an immediate favorite on the Ladies Professional Golf Tour. Professional golfers famously known for wearing skorts are Natalie Gulbis and Paula Creamer.