Emerging as a top talent at Cobreloa, Vargas moved to Universidad de Chile where he won three titles, including the 2011 Copa Sudamericana where he was named player of the tournament. In 2011 he was co-awarded the Chilean Footballer of the Year and also finished as runner-up for the South American Footballer of the Year. Following an £11.5 million move to Napoli, Vargas had subsequent loan spells at Grêmio, Valencia, and Queens Park Rangers before moving to Hoffenheim in 2015.

A full international since 2010, Vargas has earned 60 caps for Chile, scoring 31 goals. He was part of their squad at the 2014 FIFA World Cup, the 2015 Copa América, and Copa América Centenario, finishing as top scorer in Chile's victories at the latter two.

Vargas started playing in amateur teams in Renca, Santiago, but he did not participate in other youth teams, because he lived very far away from any club of greater Santiago. In 2006, he continued playing in an amateur third division team, where he participated in a tournament played in Puerto Montt. He was the top scorer of his team.

Later, Osvaldo Hurtado contacted Vargas with Jorge Aravena (then coach of Cobreloa), where he was submitted to several evaluations. Finally he was incorporated to Cobreloa squad in 2006. He played for Cobreloa B, a third Division team, scoring for the team, against Universidad Arturo Prat, on 7 August. He then scored another goal against San Marcos de Arica on 28 August.

In January 2010, he joined powerhouse Universidad de Chile for a US$700,000 fee where he had a quiet season, scoring one goal in 18 appearances. However, the following season he broke into the first team and had a brilliant performance during the year — scoring 25 goals and providing 11 assists in 44 matches[2] — winning both league semestral tournaments (Torneo Apertura and Torneo Clausura) as well as the Copa Sudamericana where he was the edition’s top-scorer and netted goals in both final legs against LDU Quito, scoring the only goal at Casa Blanca and twice in the 3–0 win at the Estadio Nacional in Santiago.[3]

In December 2011, Italian club Napoli purchased the player for a reported $17.9 million (£11.5 million).[5] On 23 December 2011, S.S.C. Napoli President Aurelio De Laurentiis, announced that Vargas would arrive at the club. "I would like to inform you officially that we purchased Vargas, a few minutes ago I received a call from Dr. De Nicola, who visited the footballer and gave his okay under medical and athletic profile. We signed the contract and we also won the competition by strong Club who wanted the player. This is the testimony that our observatory is always open and we are continuously looking for young talents in the world that can make the case of Napoli and for the growth of our team".[6] Vargas arrived at Napoli on 6 January 2012 and signed on 9 January.[7] He made his debut in a 2–1 Coppa Italia defeat of Cesena at the Stadio San Paolo on 12 January.[8] On 20 May, he was an unused substitute as Napoli defeated Juventus in the Coppa Italia Final at the Stadio Olimpico.

On 20 September 2012, in the first match of Napoli's UEFA Europa League campaign, Vargas scored his first Napoli goals, netting three in a 4–0 victory against AIK.[9] This was the first time that a Chilean player had scored a hat-trick in a continental competition in Europe.

On 17 January 2013, Vargas agreed to go on loan to Brazilian side Grêmio.[10] He made his first appearance six days later in a Copa Libertadores match against LDU Quito. He scored his first goal on February 21 against Fluminense in the Copa Libertadores. On 31 March, he scored his first goal in the Campeonato Gaúcho, converting a penalty at the Arena do Grêmio in a 1–1 draw with Passo Fundo.

Vargas recorded two goals and three assists in eight appearances as Valencia reached the semi-finals of the 2013–14 UEFA Europa League.[13]

On 21 August 2014, Vargas joined Queens Park Rangers on loan until the end of the 2014–15 Premier League season.[14] He made his debut for the club on 14 September against Manchester United, replacing Charlie Austin for the last 31 minutes at Old Trafford.[15] On 19 October, in a 2–3 loss against Liverpool at Loftus Road, Vargas scored twice after coming on as a substitute for Bobby Zamora in the 78th minute of the match.[16]

In a 2–1 loss to Arsenal on 26 December, Vargas helped his goalkeeper Robert Green save an early penalty from Alexis Sánchez by pointing out which way his fellow Chilean was likely to shoot the ball.[17]

On 22 March 2015, Vargas scored his first goal in five months during QPR's 1–2 home defeat to Everton.[18] He also netted in the team's 4–1 victory at West Bromwich Albion on 4 April, but injured his knee ligament in that match, ruling him out for the remainder of the season.[19] The season ended with QPR finishing bottom of the league, and being relegated to the Championship. 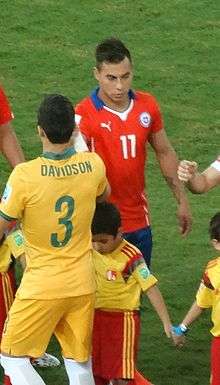 In 2009, Vargas participated in the Toulon Tournament with the U23 national team where he was champion and the team's top scorer. On 5 November 2009, he made his full international debut for the senior team in a 2–1 win over Paraguay at the Estadio CAP.[22]

In 2011, he was recalled and scored his first goal in a 3–2 friendly defeat to Spain on 2 September.[23] On 12 October, Vargas scored his first competitive international goal in a 4–2 World Cup qualifying win over Peru at the Estadio Monumental.

In September 2013, he broke the Chilean national team record for goals in consecutive matches – previously held jointly by Marcelo Salas and Carlos Caszely – by scoring twice in a 2–2 friendly draw with Spain.[3] During 2013, he scored in six consecutive matches and nine times overall for La Roja.[3]

On 1 June 2014, Vargas was named by Jorge Sampaoli in Chile's 23-man squad for the 2014 FIFA World Cup in Brazil.[24] In Chile's second group match against defending champions Spain at the Estádio do Maracanã, Vargas scored the team's opening goal as they eliminated Spain and secured qualification to the knockout stage.[25]

On 11 June 2015, Vargas scored for Chile in the opening match of the 2015 Copa América, a 2–0 win over Ecuador at the Estadio Nacional in Santiago.[26] In the team's next fixture, Vargas scored his second goal of the tournament, heading an equaliser as the hosts drew 3–3 with Mexico on 15 June.[27] In the semifinal against Peru, Vargas scored both goals in a 2–1 victory for Chile, the second of which was a long-distance effort, to send La Roja to the final. Although Vargas was substituted in extra time, Chile won in a penalty shootout against Argentina to win their first major international honour.[28] Vargas' four goals made him the competition's joint top scorer alongside Peruvian Paolo Guerrero, and he was named in the Team of the Tournament.[29]

On 14 June 2016, Vargas and Alexis Sánchez scored twice each in a 4–2 win over Panama in Philadelphia to qualify for the quarter-finals of the Copa América Centenario.[30] Four days later, he added four more goals at Levi's Stadium in a 7–0 rout of Mexico.[31] Chile retained their title with another win on penalties against Argentina, and Vargas was again the top scorer with six goals.[32]