Not to be confused with Economics education.

Education as an investment

Economics distinguishes in addition to physical capital another form of capital that is no less critical as a means of production – human capital. With investments in human capital, such as education, three major economic effects can be expected:[1]

Investments in human capital entail an investment cost, just as any investment does. Typically in European countries most education expenditure takes the form of government consumption, although some costs are also borne by individuals. These investments can be rather costly. EU governments spent between 3% and 8% of GDP on education in 2005, the average being 5%.[2] However, measuring the spending this way alone greatly underestimates the costs because a more subtle form of costs is completely overlooked: the opportunity cost of forgone wages as students cannot work while they study. It has been estimated that the total costs, including opportunity costs, of education are as much as double the direct costs.[3] Including opportunity costs investments in education can be estimated to have been around 10% of GDP in the EU countries in 2005. In comparison investments in physical capital were 20% of GDP.[4] Thus the two are of similar magnitude. 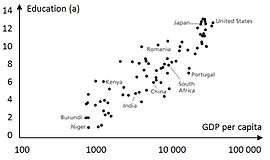 Average years of schooling versus GDP per capita (USD 2005).

Human capital in the form of education shares many characteristics with physical capital. Both require an investment to create and, once created, both have economic value. Physical capital earns a return because people are willing to pay to use a piece of physical capital in work as it allows them to produce more output. To measure the productive value of physical capital, we can simply measure how much of a return it commands in the market. In the case of human capital calculating returns is more complicated – after all, we cannot separate education from the person to see how much it rents for. To get around this problem the returns to human capital are generally inferred from differences in wages among people with different levels of education. Hall and Jones have calculated from international data that on average that the returns on education are 13.4% per year for first four years of schooling (grades 1–4), 10.1% per year for the next four years (grades 5–8) and 6.8% for each year beyond eight years.[5] Thus someone with 12 years of schooling can be expected to earn, on average, 1.1344 × 1.1014 × 1.0684 = 3.161 times as much as someone with no schooling at all. 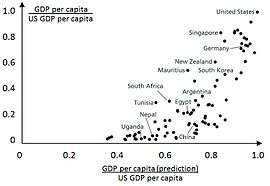 Predicted versus actual GDP per worker. The figure shows how much one would expect each country’s GDP to be higher based on the data on average years of schooling

Economy-wide, the effect of human capital on incomes has been estimated to be rather significant: 65% of wages paid in developed countries is payments to human capital and only 35% to raw labor.[1] The higher productivity of well-educated workers is one of the factors that explain higher GDPs and, therefore, higher incomes in developed countries. A strong correlation between GDP and education is clearly visible among the countries of the world, as is shown by the upper left figure. It is less clear, however, how much of a high GDP is explained by education. After all, it is also possible that rich countries can simply afford more education.

To distinguish the part of GDP explained with education from other causes, Weil[1] has calculated how much one would expect each country’s GDP to be higher based on the data on average schooling. This was based on the above-mentioned calculations of Hall and Jones on the returns on education. GDPs predicted by Weil’s calculations can be plotted against actual GDPs, as is done in the figure on the left, demonstrating that the variation in education explains some, but not all, of the variation in GDP.

Positive externalities from human capital are one explanation for why governments are involved in education. If people were left on their own, they would not take into account the full social benefit of education – in other words the rise in the output and wages of others – so the amount they would choose to obtain would be lower than the social optimum.[1]

The dominant model of the demand for education is based on human capital theory. The central idea is that undertaking education is investment in the acquisition of skills and knowledge which will increase earnings, or provide long-term benefits such as an appreciation of literature (sometimes referred to as cultural capital).[7] An increase in human capital can follow technological progress as knowledgeable employees are in demand due to the need for their skills, whether it be in understanding the production process or in operating machines. Studies from 1958 attempted to calculate the returns from additional schooling (the percent increase in income acquired through an additional year of schooling). Later results attempted to allow for different returns across persons or by level of education.[8]

Statistics have shown that countries with high enrollment/graduation rates have grown faster than countries without. The United States has been the world leader in educational advances, beginning with the high school movement (1910–1950). There also seems to be a correlation between gender differences in education with the level of growth; more development is observed in countries which have an equal distribution of the percentage of women versus men who graduated from high school. When looking at correlations in the data, education seems to generate economic growth; however, it could be that we have this causality relationship backwards. For example, if education is seen as a luxury good, it may be that richer households are seeking out educational attainment as a symbol of status, rather than the relationship of education leading to wealth.

Educational advance is not the only variable for economic growth, though, as it only explains about 14% of the average annual increase in labor productivity over the period 1915-2005. From lack of a more significant correlation between formal educational achievement and productivity growth, some economists see reason to believe that in today’s world many skills and capabilities come by way of learning outside of tradition education, or outside of schooling altogether.[9]

An alternative model of the demand for education, commonly referred to as screening, is based on the economic theory of signalling. The central idea is that the successful completion of education is a signal of ability.[10]

Although Marx and Engels did not write widely about the social functions of education, their concepts and methods are theorized and criticized by the influence of Marx as education being used in reproduction of capitalist societies. Marx and Engels approached scholarship as "revolutionary scholarship" where education should serve as a propaganda for the struggle of the working class.[11] The classical Marxian paradigm sees education as serving the interest of capital and is seeking alternative modes of education that would prepare students and citizens for more progressive socialist mode of social organizations. Marx and Engels understood education and free time as essential to developing free individuals and creating many-sided human beings, thus for them education should become a more essential part of the life of people unlike capitalist society which is organized mainly around work and the production of commodities.[11]

An education production function is an application of the economic concept of a production function to the field of education. It relates various inputs affecting a student’s learning (schools, families, peers, neighborhoods, etc.) to measured outputs including subsequent labor market success, college attendance, graduation rates, and, most frequently, standardized test scores. The original study that eventually prompted interest in the idea of education production functions was by a sociologist, James S. Coleman. The Coleman Report, published in 1966, concluded that the marginal effect of various school inputs on student achievement was small compared to the impact of families and friends.[15] Later work, by Eric A. Hanushek, Richard Murnane, and other economists introduced the structure of "production" to the consideration of student learning outcomes. Hanushek at al. (2008) reported a very high correlation between "adjusted growth rate" and "adjusted test scores".[16]

A large number of successive studies, increasingly involving economists, produced inconsistent results about the impact of school resources on student performance, leading to considerable controversy in policy discussions.[17][18] The interpretation of the various studies has been very controversial, in part because the findings have directly influenced policy debates. Two separate lines of study have been particularly widely debated. The overall question of whether added funds to schools are likely to produce higher achievement (the “money doesn’t matter” debate) has entered into legislative debates and court consideration of school finance systems.[19][20][21] Additionally, policy discussions about class size reduction heightened academic study of the relationship of class size and achievement.[22][23][24]

Selected entries on education from The New Palgrave Dictionary of Economics, 2008), 2nd Edition: