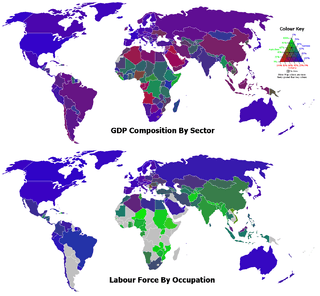 GDP Composition By Sector and Labour Force By Occupation

Service economy can refer to one or both of two recent economic developments:

The old dichotomy between product and service has been replaced by a service-product continuum. Many products are being transformed into services.

For example, IBM treats its business as a service business. Although it still manufactures computers, it sees the physical goods as a small part of the "business solutions" industry. They have found that the price elasticity of demand for "business solutions" is much less than for hardware. There has been a corresponding shift to a subscription pricing model. Rather than receiving a single payment for a piece of manufactured equipment, many manufacturers are now receiving a steady stream of revenue for ongoing contracts.

Full cost accounting and most accounting reform and monetary reform measures are usually thought to be impossible to achieve without a good model of the service economy.

Environmental effects of the service economy

This is seen, especially in green economics and more specific theories within it such as Natural Capitalism, as having these benefits:

Product stewardship or product take-back are words for a specific requirement or measure in which the service of waste disposal is included in the distribution chain of an industrial product and is paid for at time of purchase. That is, paying for the safe and proper disposal when you pay for the product, and relying on those who sold it to you to dispose of it.

Those who advocate it are concerned with the later phases of product lifecycle and the comprehensive outcome of the whole production process. It is considered a pre-requisite to a strict service economy interpretation of (fictional, national, legal) "commodity" and "product" relationships.

It is often applied to paint, tires, and other goods that become toxic waste if not disposed of properly. It is most familiar as the container deposit charged for a deposit bottle. One pays a fee to buy the bottle, separately from the fee to buy what it contains. If one returns the bottle, the fee is returned, and the supplier must return the bottle for re-use or recycling. If not, one has paid the fee, and presumably this can pay for landfill or litter control measures that dispose of diapers or a broken bottle. Also, since the same fee can be collected by anyone finding and returning the bottle, it is common for people to collect these and return them as a means of gaining a small income. This is quite common for instance among homeless people in U.S. cities. Legal requirements vary: the bottle itself may be considered the property of the purchaser of the contents, or, the purchaser may have some obligation to return the bottle to some depot so it can be recycled or re-used.

In some countries, such as Germany, law requires attention to the comprehensive outcome of the whole extraction, production, distribution, use and waste of a product, and holds those profiting from these legally responsible for any outcome along the way. This is also the trend in the UK and EU generally. In the United States, there have been many class action suits that are effectively product stewardship liability - holding companies responsible for things the product does which it was never advertised to do.

Rather than let liability for these problems be taken up by the public sector or be haphazardly assigned one issue at a time to companies via lawsuits, many accounting reform efforts focus on achieving full cost accounting. This is the financial reflection of the comprehensive outcome - noting the gains and losses to all parties involved, not just those investing or purchasing. Such moves have made moral purchasing more attractive, as it avoids liability and future lawsuits.

Role of the service economy in development

Services constitute over 50% of GDP in low income countries and as their economies continue to develop, the importance of services in the economy continues to grow.[1] The service economy is also key to growth, for instance it accounted for 47% of economic growth in sub-Saharan Africa over the period 2000–2005 (industry contributed 37% and agriculture 16% in the same period).[1] This means that recent economic growth in Africa relies as much on services as on natural resources or textiles, despite many of those countries benefiting from trade preferences in primary and secondary goods. As a result, employment is also adjusting to the changes and people are leaving the agricultural sector to find work in the service economy. This job creation is particularly useful as often it provides employment for low skilled labour in the tourism and retail sectors, thus benefiting the poor in particular and representing an overall net increase in employment.[1] The service economy in developing countries is most often made up of the following:

The export potential of many of these products is already well understood, e.g. in tourism, financial services and transport, however, new opportunities are arising in other sectors, such as the health sector. For example: