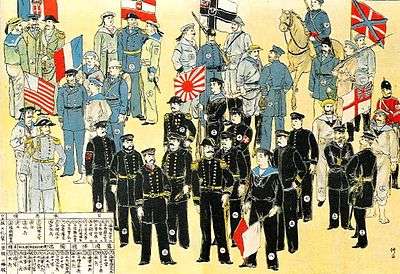 The eight nations with their naval ensigns, from left to right: 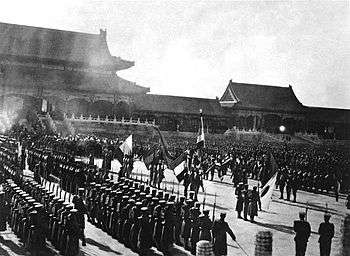 The Eight-Nation Alliance in Beijing following the defeat of the Boxer Rebellion. Immediately identifiable flags in picture:

The Eight-Nation Alliance was an international military coalition set up in response to the Boxer Rebellion in the Qing Empire of China. The eight nations were the Empire of Japan, the Russian Empire, the British Empire, the French Third Republic, the United States, the German Empire, the Kingdom of Italy and the Austro-Hungarian Empire. In the summer of 1900, when the international legations in Beijing came under attack by Boxer rebels supported by the Qing government, the coalition dispatched their armed forces, in the name of "humanitarian intervention", to defend their respective nations' citizens, as well as a number of Chinese Christians who had taken shelter in the legations. The incident ended with a coalition victory and the signing of the Boxer Protocol.

The Boxers, a peasant movement, had attacked and killed foreign missionaries, nationals and Chinese Christians across northern China in 1899 and 1900. The Qing government and Imperial Army supported the Boxers and under the Manchu general Ronglu, besieged foreign diplomats and civilians taking refuge in the Legation Quarter in Peking.[1] After failing in its initial attempt to relieve the Legation Quarter, in August 1900 the Allied force marched to Peking from Tianjin, defeated the Qing Imperial Army's Wuwei Corps in several engagements, and brought an end to the Boxer Rebellion and the siege. The members of the Alliance then occupied Peking and proceeded to loot and pillage the capital.[2][3] The forces consisted of approximately 45,000 troops, from various countries. At the end of the campaign, the Qing Imperial government signed the Boxer Protocol of 1901.[4]

Siege of the International Legations and the North Cathedral 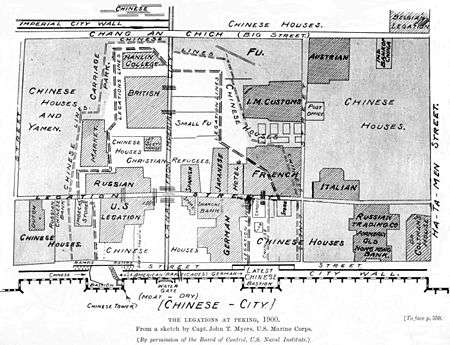 Locations of foreign diplomatic legations and front lines in Peking during the siege.

The diplomatic compound in Peking was under siege by the Wuwei Rear Division of the Chinese army and some Boxers (Yihetuan), for 55 days, from 20 June to 14 August 1900. A total of 473 foreign civilians, 409 soldiers from eight countries, and about 3,000 Chinese Christians took refuge in the Legation Quarter.[5] Under the command of the British minister to China, Claude Maxwell MacDonald, the legation staff and security personnel defended the compound with small arms and one old muzzle-loaded cannon discovered and unearthed by Chinese Christians who turned it over to the Allies; it was nicknamed the International Gun because the barrel was British, the carriage Italian, the shells Russian, and the crew American.[6]

Also under siege in Peking was the North Cathedral, the Beitang of the Catholic Church. The Beitang was defended by 43 French and Italian soldiers, 33 foreign Catholic priests and nuns and about 3,200 Chinese Catholics. The defenders suffered heavy casualties from lack of food and Chinese mines that exploded in tunnels dug beneath the compound.[7] 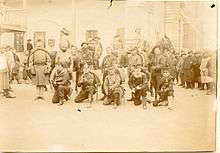 Austria-Hungary had a single cruiser SMS Zenta on station at the beginning of the rebellion, based at the Russian concession of Port Arthur.[9] Detachments of Sailors from the Zenta were the only Austro-Hungarian forces to see action.[10] Some were involved in defending the legations under siege while another detachment was involved in the rescue attempts.[10] In June, the Austro-Hungarians helped hold the Tianjin railway against Boxer forces and also fired upon several armed junks on the Hai River near Tong-Tcheou in Peking. They also took part in the seizure of the Taku Forts commanding the approaches to Tianjin, and the boarding and capture of four Chinese destroyers by Capt. Roger Keyes of HMS Fame.

The Austro-Hungarian Navy also sent the cruisers SMS Kaiserin und Königin Maria Theresia, SMS Kaiserin Elisabeth, SMS Aspern and a company of marines to China. Arriving in September, however, they were too late as most of the fighting had ended and the legations relieved. The cruisers together with the Zenta were involved in shelling and capture of several Chinese forts.[10] The Austro-Hungarians suffered minimal casualties during the rebellion. After the Boxer uprising, a cruiser was maintained permanently on the Chinese coast and a detachment of marines was deployed at the Austro-Hungarian embassy in Peking (Beijing).[10] Lieutenant Georg Ludwig von Trapp, made famous in the 1959 musical The Sound of Music, was decorated for bravery aboard SMS Kaiserin und Königin Maria Theresia during the rebellion.

Several of the Australian colonies sent contingents of naval and army personnel to support the British contingent. For example, South Australia sent its entire navy: the gunboat HMAS Protector.[13] Australia was not an official member of the eight-nation alliance and its forces arrived too late to see significant action.[14]

Britain provided 10,000 troops, of which a large part were Indian troops, made out of units of Baluchis, Sikhs, Gurkhas, Rajputs and Punjabis.[15][16][17]

German troops of the I. Eastasia Infantry Regiment with captured Boxer flags.

Germany had gained a presence in China after the Juye Incident in which two German missionaries were murdered in November 1897. The concession in Kiaochow, with the port of Tsingtao, was used as a naval base for the East Asia Squadron and a trading port. It was governed and garrisoned by the Imperial German Navy. At the outbreak of the Boxer Rebellion in June 1900, the garrison of the German concession comprised the III. Seebataillon with 1,126 men, a marine/naval artillery battery, about 800 men of a Kommando Detachment and sailors from the East Asian Squadron.[18] 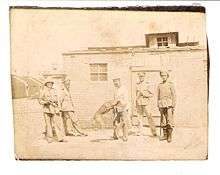 German officers in Qingdao during the Boxer Rebellion

With the increasing threat of the Boxers a small group from the III. Seebatallion was sent to Peking and Tientsin to protect German interests there while the majority stayed behind to prevent attacks against Tsingtao. The siege of the foreign legations in Peking soon convinced Germany and the other European powers that more forces were needed to be sent to China to reinforce allied forces. The first troops dispatched from Germany were the Marine-Expeditionskorps which consisted of the I. and II. Seebatallions. They were soon followed by the Ostasiatische Expeditionskorps (East Asian Expeditionary Corps), which was a force of about 15,000 of mostly volunteers from the regular Army under the command of Gen Alfred Count von Waldersee. It comprised initially four and later six two-battalion infantry regiments and a Jäger company, single regiments of cavalry and field artillery and various support and logistics units.[18] On arrival in China it incorporated the Marine-Expeditionskorps that had preceded it to China by a few weeks.[18]

However, the majority of the German forces dispatched arrived too late to take part in any of the major actions;[18] the first elements of the Corps arrived at Taku on September 21[18] after the legations had been relieved. As a result most of the Corps were mainly employed for garrison duties, they did fight a number of smaller engagements against pockets of remaining Boxers.[19] The Corps was later disbanded and recalled to Germany early in 1901.[19] 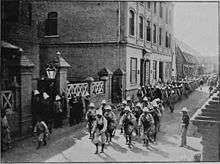 Italian forces were initially made up from sailors from warships. However, a larger contingent was later dispatched from Italy, including 83 officers, 1,882 troops, and 178 horses. The history and the vicissitudes of those eastern settlements, which remained under the Italian dominion for 41 years, involved not only the diplomatic representatives and the few Italian colonists but also the forces of the Army and the Navy. The larger part of about Italian 20,000 soldiers and officers who fought in the victorious campaign (June–August 1900) against the Boxers' rebel Chinese nationalists troops allied to the United States, Great Britain, France, Austria-Hungary, Germany, Russia and Japan – were recalled from Beijing after the end of the conflict. 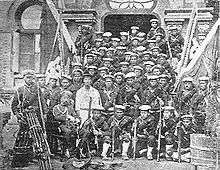 Japan provided the largest contingent of troops; 20,840, as well as 18 warships. Of the total number, 20,300 were Imperial Japanese Army troops of the 5th Infantry Division under Lt. General Yamaguchi Motoomi; the remainder were 540 naval rikusentai from the Imperial Japanese Navy. 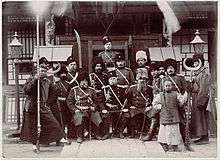 Russian troops during the Boxer Rebellion

Russia supplied the second largest force after Japan, with 12,400 troops, consisting mainly of garrisons from Port Arthur and Vladivostok.

American troops during the Boxer Rebellion.

In the United States, the suppression of the Boxer Rebellion was known as the China Relief Expedition.[20] The United States was able to play a major role in suppressing the Boxer Rebellion largely due to the presence of American forces deployed in the Philippines since the US annexation of the Philippines in 1898.[21] Of the foreign troops under siege, there were 56 American Sailors and Marines from the USS Oregon and USS Newark.[21] The main American formations deployed were the 9th Infantry and 14th Infantry regiments, elements of the 6th Cavalry regiment, the 5th Artillery regiment, and a Marine battalion, all under the command of Adna Chaffee.[22][23]

Troops of the eight aforementioned nations invaded and occupied Peking on 14 August 1900. Empress Dowager Cixi, the Emperor and high government officials fled the Imperial Palace for Xi'an and sent Li Hongzhang for peace talks with the Alliance.

In a research article, Kenneth Clark states: "Following the taking of Peking, troops from the international force looted the capital city and even ransacked the Forbidden City, with many Chinese treasures finding their way to Europe."[24] 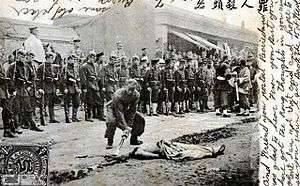 German and Japanese soldiers witnessing the street execution of a Chinese boxer.

An unknown number of people believed to be Boxers were beheaded both during and after the uprising. This became the subject of an early short film.[25]

A U.S. Marine wrote that he saw German and Russian troops bayonet women after raping them.[26]

In Peking, it was alleged that Bishop Pierre-Marie-Alphonse Favier-Duperron posted a bulletin, effective 18–26 August, declaring that Catholic Christians might steal those bare necessities required to survive, and that robbery of 50 taels of silver or fewer needed neither reporting nor compensation. The accusation was denied by the Bishop.[27]