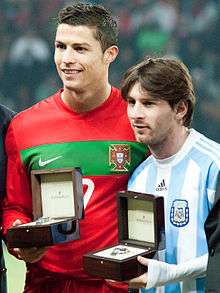 The FIFA Ballon d'Or (French pronunciation: ​[balɔ̃ dɔʁ], "Golden Ball") was an annual association football award presented to the world's best men's player from 2010 to 2015. A merger between France Football's Ballon d'Or and the FIFA World Player of the Year award, it was considered the most prestigious individual honour in world football. The FIFA Ballon d'Or was awarded based on votes from international journalists and national team coaches and captains, who selected the players they deemed to have performed the best in the previous calendar year.

The six editions of the FIFA Ballon d'Or were dominated by Lionel Messi and Cristiano Ronaldo, as part of their ongoing rivalry. Barcelona's Messi won the inaugural Ballon d'Or in 2010, before retaining the title twice. Ronaldo, who plays for Real Madrid, won successive awards in the next two years. The final FIFA Ballon d'Or was presented to Messi in 2015. Its awarding bodies subsequently ended their partnership. 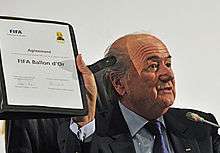 From 2005, the winners of the Ballon d'Or and FIFA World Player of the Year award were identical each year. Following the introduction of a global Ballon d'Or format in 2007, France Football and FIFA opted to merge the two awards. The creation of the FIFA Ballon d'Or was subsequently announced during the 2010 FIFA World Cup in South Africa.[3] The inaugural award was presented that same year to the Argentine Lionel Messi.[4]

After a six-year partnership, France Football and FIFA terminated the joint award. Lionel Messi had received the final FIFA Ballon d'Or.[5] For historical purposes, both awarding bodies regard the six editions of the FIFA Ballon d'Or as a continuation of their respective awards.[6][7]

The winners of the FIFA Ballon d'Or were chosen by international journalists and the coaches and captains of the national teams under FIFA's jurisdiction.[3] In a system based on positional voting, each voter was allotted three votes, worth five points, three points and one point, and the three finalists were ordered based on total number of points. Voters were provided with a shortlist of 23 players from which they could select the three players they deemed to have performed the best in the previous calendar year.[8]