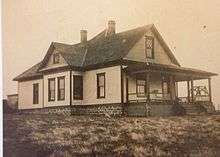 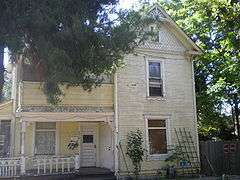 The Orin Jordan House in Whittier, California is an example of a Folk Victorian.

Folk Victorian is an architecture style employed for some homes in the United States between 1870 and 1910, though isolated examples continued to be built well into the 1930's. Folk Victorian is A subset of Victorian architecture, it differentiates itself from other subsets of Victorian architecture (such as Queen Anne) by being less elaborate and having more regular floor plans.[1] Examples include the Bacon Hotel, Albert Spencer Wilcox Beach House, Lost Creek Baltimore and Ohio Railroad Depot (1892), James B. Carden House (1885), Ephriam M. Baynard House, and Sibley's General Store (1899) in the Sibley's and James Store Historic District.