The American Craftsman style, or the American Arts and Crafts movement, is an American domestic architectural, interior design, landscape design, applied arts, and decorative arts style and lifestyle philosophy that began in the last years of the 19th century. As a comprehensive design and art movement it remained popular into the 1930s. However, in decorative arts and architectural design it has continued with numerous revivals and restoration projects through present times.

A representative American Craftsman interior, with period-appropriate furnishings at the Ernest and Florence Halstead House in Los Angeles, California. It was completed in 1912.

The American Craftsman style (along with a wide variety of related but conceptually distinct European design movements) developed out of the British Arts and Crafts movement going on since the 1860s.

Libertarian socialist William Morris founded the British movement as a reaction against the Industrial Revolution's perceived devaluation of the individual worker and resulting degradation of the dignity of human labor. The movement naturally emphasized handwork over mass-production, with the problem that expensive materials and costly skilled labor restricted acquisition of Arts and Crafts productions to a wealthy clientele, often ironically derided as "champagne socialists".

While the British movement also reacted against the eclectic Victorian "over-decorated" aesthetic, the Arts and Crafts style's American arrival coincided with the decline of the Victorian era. The American Arts and Crafts Movement shared the British movement's reform philosophy, encouraging originality, simplicity of form, local natural materials, and the visibility of handicraft, but distinguished itself, particularly in the Craftsman Bungalow style, with a goal of ennobling modest homes for a rapidly expanding American middle class.

The Edward Schulmerich House in Hillsboro, Oregon, completed in 1915.

In the late 1890s, a group of Boston’s more influential architects, designers, and educators was determined to bring the design reforms begun in Britain by William Morris to America. Its first meeting, to organize an exhibition of contemporary craft objects, was held in January 1897 at the Museum of Fine Arts, Boston (MFA). Present at this meeting were local museum trustees, including General Charles Loring, William Sturgis Bigelow, and Denman Ross; art collectors and patrons; writers and art critics, such as Sylvester Baxter for the Boston Evening Transcript; and artists and architects, such as Ross Turner and Ralph Clipson Sturgis.

They succeeded in opening the first American Arts and Crafts Exhibition in April 1897 at Copley Hall, featuring over 1000 objects made by 160 craftsmen, half of whom were craftswomen. Some of the exhibit's supporters included: the founder of Harvard’s School of Architecture, Langford Warren; social reformers Mrs. Richard Morris Hunt, Arthur Astor Carey, and Edwin Mead; and graphic designer Will Bradley.

The exhibition's success led to the formation of The Society of Arts and Crafts in June 1897, with a mandate to “Develop and encourage higher standards in the handicrafts.” The Society focused on the relationship of artists and designers to the world of commerce, and on high-quality workmanship. 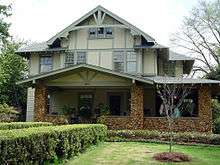 The Abernathy-Shaw House in the Silk Stocking District of Talladega, Alabama. It was built in 1908.

The Society of Arts and Crafts mandate was soon expanded into a credo which read:

This Society was incorporated for the purpose of promoting artistic work in all branches of handicraft. It hopes to bring Designers and Workmen into mutually helpful relations, and to encourage workmen to execute designs of their own. It endeavors to stimulate in workmen an appreciation of the dignity and value of good design; to counteract the popular impatience of Law and Form, and the desire for over-ornamentation and specious originality. It will insist upon the necessity of sobriety and restraint, of ordered arrangement, of due regard for the relation between the form of an object and its use, and of harmony and fitness in the decoration put upon it.

In the United States the Arts and Crafts style incorporated locally handcrafted wood, glass, and metal work creating objects that were both simple and elegant. In architecture, reacting to both Victorian architectural opulence and increasingly common mass-produced housing, the style incorporated a visible sturdy structure, of clean lines and natural materials. The movement's name American Craftsman came from the popular magazine, The Craftsman, founded in 1901 by philosopher, designer, furniture maker, and editor Gustav Stickley. The magazine featured original house and furniture designs by Harvey Ellis, the Greene and Greene company, and others. The designs, while influenced by the ideals of the British movement, found inspiration in specifically American antecedents such as Shaker furniture and the Mission Revival Style, and the Anglo-Japanese style. Emphasis on the originality of the artist/craftsman led to the later design concepts of the 1930s Art Deco movement. 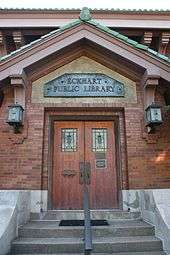 Detail of the original entrance to the Eckhart Public Library, circa 1911, in Auburn, Indiana.

Several developments in the American domestic architecture of the period are traceable not only to changes in taste and style but also to the shift from the upper- to middle-class patronage. The American Victorian typically took the form of a two-story square house with a hip roof disguised behind a variety of two-storied bays, with an assortment of gables as well as octagonal or round turrets and wraparound porches presenting a complex facade. Typically, the basic square house was also complemented by a back wing complete with its own entrances, and a stairwell that housed the kitchen, pantries, and scullery on the first floor and the servants' quarters on the second. Fitted with inferior-quality woodwork and hardware, and noticeably smaller bedrooms and lower ceiling heights, the Victorian kitchen-servants' wing embodied the aristocratic class distinctions of the Old World.

With the large bays, turrets, and rear wing removed, the front porch simplified, and the ceilings lowered somewhat, it is not difficult to see how the American Foursquare developed from the common American Queen Anne. The middle-class housewife of the era would not have domestic servants (at least not live-in ones) and would be doing much if not all of the housework herself, as well as watching the children. These added roles made it important that the kitchen be integrated into the main house with easy sight lines to the common areas of the main floor (the dining and living rooms) as well as to the back yard. Commonly, the butler's pantry of the Victorian Era was replaced with dining room cabinetry that often consisted of "built-ins", which gave home designers the opportunity to incorporate wood and glass craftsmanship into the public aspects of the home.

Another common design development arising from the class-shift of the time was the built-in "breakfast nook" in the kitchen. The Victorian kitchen of the previous era was separated from the family view and daily routine. It typically had a work table (having the equivalent purpose of the modern countertop) at which the servants would eat after the family meal was served and the kitchen tidied. The Victorian kitchen had no "proper" place for a family member to sit, eat, or do anything else. Again, as the housewife of the Craftsman era was now preparing the family meals, the Victorian kitchen gave way to one designed as the heart of the family's daily life. The breakfast nook often placed under a window or in its own bay provided a place for the family to gather at any time of the day or evening, particularly while food was being prepared.

In Southern California the firm Greene and Greene are the most renowned practitioners of the original American Craftsman Style, and were based in Pasadena, California. Their projects for Ultimate bungalows include the Gamble House and Robert R. Blacker House in Pasadena, and the Thorsen House in Berkeley—with numerous others in California. Other examples in the Los Angeles region include the Lummis House and Journey House located in Pasadena. 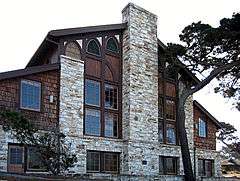 Merrill Hall at the Asilomar Conference Grounds, one of the buildings designed by Julia Morgan. Completed in 1928.

In Northern California the architects Bernard Maybeck, with the Swedenborgian Church; and Julia Morgan, with the Asilomar Conference Grounds and Mills College projects, are renowned for their well planned and detailed projects in the Craftsman style. Many other designers and projects represent the style in the region.