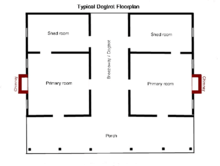 A typical floorplan for a dogtrot house. Often the rear shed rooms began as a full-width rear porch and were later enclosed. 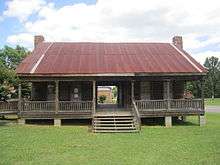 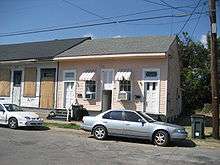 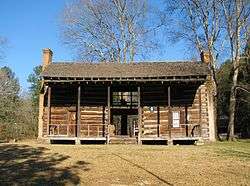 The John Looney House near Ashville, Alabama, a rare example of a full two-story dogtrot. It was built c. 1818, during the Alabama Territorial period.

One of several dogtrot houses formerly used as slave quarters at the plantation of Thornhill near Forkland, Alabama. This photograph was taken in 1934, the dwelling was subsequently destroyed. Note the split-shingle roof and stick-and-mud chimney.

The dogtrot, also known as a breezeway house, dog-run, or possum-trot, is a style of house that was common throughout the Southeastern United States during the 19th and early 20th centuries.[1][2] Some theories place its origins in the southern Appalachian Mountains. Some scholars believe the style developed in the post-Revolution frontiers of Kentucky and Tennessee. Others note its presence in the low country of the Carolinas from an early period. The main style point was a large breezeway through the center of the house to cool occupants in the hot southern climate. [1][3]

A dogtrot house historically consisted of two log cabins connected by a breezeway or "dogtrot", all under a common roof. Typically one cabin was used for cooking and dining while the other was used as a private living space, such as a bedroom. The primary characteristics of a dogtrot house is that it is typically one story (although  1 1⁄2-story and more rare two-story examples survive), has at least two rooms averaging between 18 to 20 feet (5.5 to 6.1 m) wide that each flank an open-ended central hall. Additional rooms usually take the form of a semidetached ell or shed flanking the hall, most commonly at the rear. Enclosed shed rooms are also sometimes found at the front, although a shed-roof front porch is the most common form.[1][3]

Secondary characteristics of the dogtrot house includes placement of the chimneys, staircases, and porches. Chimneys were almost always located at each gable end of the house, with each serving one of the two main rooms. If the house was 1½ or the rarer two stories, the necessary staircase was usually at least partially enclosed or boxed in. The stairway was most commonly placed in one or both of the main rooms, although it was sometimes placed in the open hallway. Although some houses had only the open central hall and flanking rooms, most dogtrots had full-width porches to the front and/or rear.[1][3]

The town of Dubach in Lincoln Parish, Louisiana, has several surviving dogtrot houses. In 1990, it was recognized as the "Dogtrot Capital of the World" by the Louisiana State Legislature.[6][7] The Autrey House Museum, a dogtrot house built in 1849, is located in Dubach; the home is believed to be the oldest extant structure in Lincoln Parish.[8]

The estate known as "Ranch Azalee" in south Webster Parish in north Louisiana, formerly owned by the late State Senator Harold Montgomery, was originally of dogtrot design, having begun ca. 1840 as the James Jackson Bryan House. In 1999, Ranch Azalee was added to the National Register of Historic Places.[9]

Near Nashville, Arkansas, the Noel Owen Neal House was built in 1840. Neal, a farmer, died in 1850. His wife, Hesky, maintained the farm after his death. The house has been moved to Washington, Arkansas, and has undergone restoration to include the replacing of the roof, porches, and chimneys.[10]

The LSU Rural Life Museum in Baton Rouge, Louisiana includes a restored dogtrot house built by Thomas Neal Sr. from the 1860s to the early 1870s in Rapides Parish. The home was lived in by descendants of Mr. Neal until 1976; the house was moved to the museum in 1979.[11]

The Barrington Living History Museum in Washington-on-the-Brazos, Texas, which demonstrates life in mid-19th century Texas, has as its centerpiece the Anson Jones home, a four-room dogtrot cabin built by Dr. Anson Jones, the last president of the Republic of Texas. This home was moved to the site in 1936.[12]

The Log Cabin Village, a living history village owned and operated by the city of Fort Worth, Texas includes the restored Parker Cabin, which was built by a relative of Cynthia Ann Parker in 1848.[13]

The Dallas Heritage Village, in Dallas, Texas hosts a dogtrot house built in the winter of 1845-1846 near what is now the Dallas/Fort Worth International Airport. This dogtrot was originally a log cabin, but was later covered in clapboard.[14]

The Sterne-Hoya House was built in Nacogdoches, Texas in 1830 by Texas Revolution leader Adolphus Sterne as a dogtrot, although the open breezeway was later enclosed.[15]

In Leesville, Louisiana, the Museum of West Louisiana includes the Alexander Airhart Home, a dogtrot house.[16]

The Old Choate House Museum in Indianola, Oklahoma is a story and a half dogtrot house that once belonged to a past Choctaw Senate president.[17]

On site at the East Texas Arboretum sits the Wofford House, built in 1850 by B.W.J. Wofford. The now restored home was moved to the arboretum in 2001 from Henderson County.[18]

Around 1820, the Jacob Wolf House in Norfork, Arkansas was constructed. The two-story dog-trot home of a pioneer leader is the oldest known standing structure in the state. The house was designated as a county seat and courthouse in 1825 by the Arkansas Territorial Legislature.[21]

In Tunica, Mississippi, the Tunica Museum owns and operates the Tate Log House, a log cabin dogtrot home built in 1840. This home is the oldest surviving structure in the county.[23]

The John Looney House in Ashville, Alabama, is a two-story dogtrot house, built in the 1820s.[25]

The Sam Houston Memorial Museum in Huntsville, Texas has two dogtrot cabins.[26][27] The Woodland House, the most important structure at the museum, was constructed in 1847 by Sam Houston when he was serving as one of Texas's first United States senators.[28] and has siding over log construction. The Bear Bend Cabin, a four-room, story-and-a-half log cabin, was built by Sam Houston as a hunting lodge in the 1850s.[29]

At Louisiana State University in Shreveport, the Pioneer Heritage Center [30] hosts the Thrasher House,[31] a two-room dogtrot house built in 1850 by Thomas Zilks near Castor, Louisiana. The home was moved to LSUS in 1981.

In 1800 Jacob Eversole, of what is now Perry County, Kentucky, constructed an addition to the one room cabin he had erected in 1789, creating a two-story dogtrot home. The home is currently owned by Mr. Eversole's descendants.[32]

The Gaines-Oliphint house, located in Hemphill, Texas, is a story-and-a-half dogtrot built by James Gaines, one of the earliest Anglo settlers to Texas. The home was built some time between 1818 and 1849 and is currently owned by a chapter of the Daughters of the Republic of Texas.[33]

Washington Parish, Louisiana hosts the Sylvest House. This home, built in 1880 by Nehemiah Sylvest, was originally located in Fisher, Louisiana but has since been moved to the fairgrounds in Franklinton, Louisiana.[34]