This article is about the architectural style. For other uses, see Cape Cod (disambiguation). 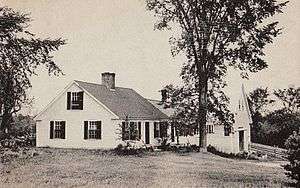 A Cape Cod house is a low, broad, single-story frame building with a moderately steep pitched gabled roof, a large central chimney, and very little ornamentation. Originating in New England in the 17th century, the simple symmetric design was constructed of local materials to withstand the stormy, stark weather of Cape Cod. It features a central front door flanked by multi-paned windows either singly or in pairs. The space above the 1st floor was often left unfinished, with or without windows on the gable ends.

The style enjoyed a boom in popularity and adaptation to modern needs in the 1930s-1950s, particularly with Colonial Revival embellishments. It remains a feature of New England home-building.

The Cape Cod style originated with the colonists who came from England to New England. They adapted the English Hall and parlor house, using local materials to best protect against New England's notoriously stormy weather. Over the next several generations emerged a 1- to  1 1⁄2-story house with wooden shutters and clapboard or shingle exterior.

The Reverend Timothy Dwight IV (1752–1817), president of Yale University from 1795–1817, coined the term "Cape Cod House" after a visit to the Cape in 1800. His observations were published posthumously in Travels in New England and New York (1821–22).[1] The style was popularized more broadly in a slightly more elaborate Colonial Revival variant popularized in the 1930s–50s, though traditional unornamented capes remain common in New England. 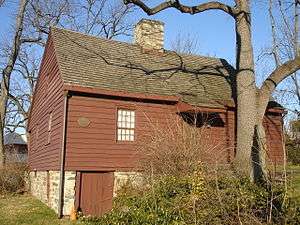 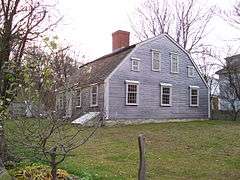 Colonial-era Capes were most prevalent in the Northeastern United States and Atlantic Canada. They were made of wood, and covered in wide clapboard or shingles, often unpainted, which weathered grey over time. Most houses were small, usually 1,000–2,000 square feet in size. Often windows of different sizes were worked into the gable ends, with those of nine and six panes the most common.

The style has a symmetrical appearance with front door in the center of the house, and a large central chimney that could often accommodate back-to-back fireplaces. The main bedroom was on the first floor, with an often unfinished loft on the second. A typical early house had no dormers and little or no exterior ornamentation. Many built during the Greek Revival featured flanking dormers singly or in pairs, an entablature with corner pilasters, pedimented gable ends, and a pilaster-and-lintel entry with sidelights.[4] 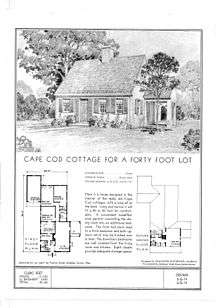 The first Cape Cod houses fall into four categories: the quarter, half, three-quarter, and full Cape. The comparatively rare quarter cape is a single bay, usually a wider "outside" bay that would become rooms. It has a single door and a single window on the front, but is full depth. The half Cape is two bays, with a door to one side of the house and two windows on one side of the door; the three-quarter Cape has a door with two windows on one side and a single window on the other, while the full Cape consists of a front door in the center of the home, flanked on each side by two windows.[5] Otherwise, the three categories of early Cape Cod houses were nearly identical in layout. Inside the front door, a central staircase led to the small upper level, which consisted of two children’s bedrooms.[5] The lower floor consisted of a hall for daily living (including cooking, dining, and gathering) and the parlor, or master bedroom.[6]

Some use a different naming system, and call the full-size version a "double cape," but this is used more often for an extended duplex structure.

"High post," also known as "kneewall," capes were originally an uncommon variant, but became more so into the 19th century, and became a feature of cape-derived vernacular architecture in the Midwest. The posts extend vertically past the first floor, increasing usable space on the second floor and simplifying joinery, at a cost of structural rigidity. The kneewall was often fenestrated with small low windows.[7]

Over the years owners doubled the full Cape and added wings onto the rear[6] or sides, typically single-storied. Dormers were added for increased space, light, and ventilation. A screened-in porch was sometimes added to one side of the home, rarely the front.

Colonial Revival Cape Cod houses are very similar to Colonial Cape Cod houses, but some have the chimney at one end of the living room on the side of the house. Elaborate replicas were designed for the affluent, while architects such as Royal Barry Wills modernized the Cape for middle-class families[8] by including modern amenities that addressed demands for increased privacy and technology, including bathrooms, kitchens, and garages.[9] Adaptations proliferated throughout suburbs which emerged after World War II, and planned communities like Levittown, New York offered Cape Cod styled tract housing, particularly to returning soldiers.[10]