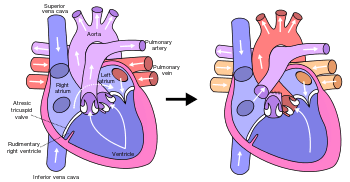 The "Fontan procedure" or "Fontan Kreutzer procedure" is a palliative surgical procedure used in children with univentricular hearts. It involves diverting the venous blood from the IVC and SVC to the pulmonary arteries without passing through the morphologic right ventricle; i.e., the systemic and pulmonary circulations are placed in series with the functional single ventricle. It was initially described in 1971 by Dr. Francois Marie Fontan (1929 – ) from Bordeaux, France and by Dr. Guillermo Kreutzer from Buenos Aires, Argentina (1934 – ) separately as a surgical treatment for tricuspid atresia.[1] [2]

The Fontan procedure is used in pediatric patients who possess only a single functional ventricle, either due to lack of a heart valve (e.g. tricuspid or mitral atresia), an abnormality of the pumping ability of the heart (e.g. hypoplastic left heart syndrome or hypoplastic right heart syndrome), or a complex congenital heart disease where a bi-ventricular repair is impossible or inadvisable. The single ventricle is doing nearly twice the expected amount of work because it has to pump blood for the body and lungs. Patients typically present as neonates with cyanosis or congestive heart failure.[3] Fontan completion is usually carried out when the patient is 2–5 years of age, but is also performed before 2 years of age.[4][5]

After Fontan completion, blood must flow through the lungs without being pumped by the heart. Therefore, children with high pulmonary vascular resistance may not tolerate a Fontan procedure. Often, cardiac catheterization is performed to check the resistance before proceeding with the surgery. This is also the reason a Fontan procedure cannot be done immediately after birth; the pulmonary vascular resistance is high in utero and takes months to drop.

There are three variations of the Fontan procedure:[6] 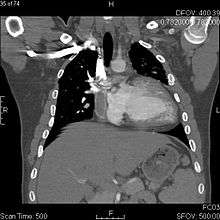 The Fontan is usually done as a two staged repair.

The first stage, also called a Bidirectional Glenn procedure or Hemi-Fontan (see also Kawashima procedure), involves redirecting oxygen-poor blood from the top of the body to the lungs. That is, the pulmonary arteries are disconnected from their existing blood supply (e.g. a shunt created during a Norwood procedure, a patent ductus arteriosus, etc.). The superior vena cava (SVC), which carries blood returning from the upper body, is disconnected from the heart and instead redirected into the pulmonary arteries. The inferior vena cava (IVC), which carries blood returning from the lower body, continues to connect to the heart.

The second stage, also called Fontan completion, involves redirecting the blood from the IVC to the lungs. At this point, the oxygen-poor blood from upper and lower body flows through the lungs without being pumped (driven only by the pressure that builds up in the veins). This corrects the hypoxia and leaves the single ventricle responsible only for supplying blood to the body.

In the short term, children can have trouble with pleural effusions (fluid building up around the lungs). This can require a longer stay in the hospital for drainage with chest tubes. To address this risk, some surgeons make a fenestration from the venous circulation into the atrium. When the pressure in the veins is high, some of the oxygen-poor blood can escape through the fenestration to relieve the pressure. However, this results in hypoxia, so the fenestration may eventually need to be closed by an interventional cardiologist.

In a 2016 review, Dr. Jack Rychik, head of the Single Ventricle Survivorship Program at Children's Hospital of Philadelphia summarized the long-term consequences of Fontan circulation as an "indolent and progressive state of heart failure" with predictable long term consequences on several organ systems.[7] Chronic venous hypertension and lowered cardiac output are assumed to be at the root of lymphatic abnormalities such as chylothorax, protein losing enteropathy and plastic bronchitis which may occur in the immediate post-operative period as well as in the medium term. Concerns about damage to the liver have emerged more recently, as Fontan circulation produces congestion in this organ which leads to progressive hepatic fibrosis. Screening protocols and treatment standards are emerging in the light of these discoveries.[7]

The Fontan procedure is palliative — not curative — but in many cases it can result in normal or near-normal growth, development, exercise tolerance, and good quality of life.[8] However, in 20-30% cases, patients will eventually require heart transplantation[9] and given the long-term consequences of chronic venous hypertension and insidious organ damage, freedom from morbidity is unlikely in the long term.