A vascular bypass (or vascular graft) is a surgical procedure performed to redirect blood flow from one area to another, in which a diseased artery is bypassed from an area of normal blood flow proximal to it, to another relatively normal area distally. It is commonly performed due to inadequate blood flow (ischemia) caused by vascular atherosclerosis or stenosis, or as a part of organ transplantation. In general, someone's own vein (autograft) is the preferred graft material (or conduit) for a vascular bypass, but other types of grafts such as polytetrafluoroethylene (Teflon), polyethylene terephthalate (Dacron), or a different person's vein (allograft) are also commonly used. Arteries can also serve as vascular grafts. A surgeon sews the graft to the source and target vessels by hand using surgical suture, creating a surgical anastomosis.

Cardiac bypass is performed when the arteries that bring blood to the heart muscle (coronary arteries) become clogged by plaque.[1][2] Such a condition may cause chest pain from angina pectoris or a heart attack.

In the legs, bypass grafting is used to treat peripheral vascular disease, acute limb ischemia, aneurysms and trauma. While there are many anatomical arrangements for vascular bypass grafts in the lower extremities depending on the location of the disease, the principle is the same: to restore blood flow to an area without normal flow. For example, a femoral-popliteal bypass ("fem-pop") might be used if the femoral artery is occluded. Other anatomic descriptions of lower extremity bypasses include: 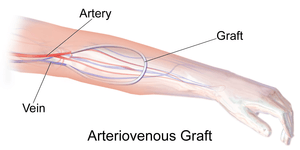 An arteriovenous graft serving as a fistula for hemodialysis access

A vascular bypass is often created to serve as an access point to the circulatory system for hemodialysis. Such a bypass is referred to as an arteriovenous fistula if it directly connects a vein to an artery without using synthetic material.

When several arteries are blocked and several bypasses are needed, the procedure is called multiple bypass. The number of bypasses needed does not always increase the risk of surgery, which depend more on the patient's overall health.

Prior to constructing a bypass, most surgeons will obtain or perform an imaging study to determine the severity and location of the diseased blood vessels. For cardiac and lower extremity disease, this is usually in the form of an angiogram. For hemodialysis access, this can be done with ultrasound. Occasionally, a CT angiogram will take the place of a formal angiogram.

The lack of an adequate venous conduit is a relative contraindication to bypass surgery, and depending on the area of disease, alternatives may be used. Medical conditions such as ischemic heart disease or chronic obstructive pulmonary disease that increase the risk of surgery are also relative contraindications. For coronary and peripheral vascular disease, lack of "runoff" to the distal to the bypassed area is also a contraindication because a vascular bypass around one diseased artery to another diseased area does not solve the vascular problem.

If a patient is deemed to be too high-risk to undergo a bypass, he or she may be a candidate for angioplasty or stenting of the relevant vessel.

Dogma in vascular bypass technique says to obtain proximal and distal control. This means that in a vessel with flow through it, a surgeon must be have exposure of the furthest and nearest extents of the blood vessel in which the bypass is being created, so that when the vessel is opened, blood loss is minimized. After the necessary exposure, clamps are usually used on both the proximal and distal end of the segment. Exceptions exist where there is no blood flow through the target vessel at the area of proposed entry, as is the case with an intervening occlusion.

If the organ perfused by an artery is sensitive to even temporary occlusion of blood flow, such as in the brain, various other measures are taken.

In neurosurgery, excimer laser assisted non-occlusive anastomosis (ELANA) is a technique use to create a bypass without interrupting the blood supply in the recipient blood vessels. This reduces the risk of stroke or a rupture of an aneurysm.

The ELANA technique is a subtle modification of other methods to establish a connection between blood vessels (anastomosis) to create a bypass in or to the brain. The differences involve how the recipient artery is opened. In conventional techniques, the recipient artery is temporarily interrupted (occluded with clips) and opened using microscissors or scalpel, while in the ELANA technique blood flow is not interrupted and the opening (arteriotomy) is created with radiation from a 308 nm excimer laser delivered through a catheter inserted in the vessel that will become the bypass while blood continues to flow through the artery that receives the bypass. This difference reduces the risk of ischemia to the regions supplied by the artery receiving the bypass. The technique is most valuable in neurosurgery, as brain cells are particularly sensitive to the lack of blood supply (ischemia), including those created by older methods of bypass. Bypasses created with the help of the ELANA can be to major arteries in the brain, including extracranial to intracranial bypass, or between two arteries in the brain (intracranial to intracranial).

Surgeons create these bypasses mainly as a step in the treatment of patients with unclippable and uncoilable giant aneurysms or tumors at the base of the skull or to treat patients at risk of stroke who can not otherwise be treated.

The ELANA technique has been extensively described in medical literature. It was developed starting in 1993[5] to find a way to treat patients with a bypass to a major cerebral artery without the risk of cerebral ischemia during the procedure. This technique has been reported by the general news media.[6]

Risks of the bypass:

Immediately following coronary artery or neurosurgical vascular bypass surgery, patients recover in an intensive care unit or coronary care unit for one to two days. Provided that recovery is normal and without complications, they can move to a less intensively monitored unit such as a step-down unit or a ward bed. Depending on the extent of the surgery, recovery from a leg bypass may start from a step-down or ward bed. Monitoring immediately after bypass surgery focuses on signs and symptoms of bleeding and graft occlusion. If bleeding is detected, treatment can range from transfusion to reoperation. Later on in the hospital course, common complications include wound infections, pneumonia, urinary tract infection, and graft occlusion.[8]

At discharge, patients are often prescribed oral painkillers, and should be prescribed a statin and an anti-platelet medication if not contraindicated and their bypass was performed for atherosclerosis, (e.g., peripheral vascular disease or coronary artery disease). Some patients start feeling normal after one month, while others may still experience problems several months after the procedure.[8][9]

During the first twelve weeks after most bypass operations, patients are advised to avoid heavy lifting, house work, and strenuous recreation like golf, tennis, or swimming while their surgical wounds heal, particularly the sternum after coronary bypass.[8][10]

Part of the recovery after any bypass surgery includes regular visits to a physician to monitor the patient's recovery. Normally a follow-up visit with a surgeon is scheduled for two to four weeks after surgery. The frequency of these visits gradually lessens as the patient's health improves.[8]

For vascular bypass operations performed for atherosclerosis, the operation does not cure the metabolic problem that led to the vascular disease. Lifestyle changes that include quitting smoking, making diet changes, and getting regular exercise are required to cure the underlying condition.[8][11]