In medicine, a Holter monitor (often simply "Holter" or occasionally ambulatory electrocardiography device) is a portable device for continuously monitoring various electrical activity of the cardiovascular system for at least 24 hours (often for two weeks at a time).

The Holter's most common use is for monitoring heart activity (electrocardiography or ECG). Its extended recording period is sometimes useful for observing occasional cardiac arrhythmias which would be difficult to identify in a shorter period. For patients having more transient symptoms, a cardiac event monitor which can be worn for a month or more can be used.

The Holter monitor was developed at the Holter Research Laboratory in Helena Montana by experimental physicists Norman J. Holter and Bill Glasscock,[1][2] who started work on radio telemetry in 1949. Inspired by a suggestion from cardiologist Paul Dudley White in the early 1950s, they redirected their efforts toward development of a wearable cardiac monitoring device.[3] The Holter monitor was released for commercial production in 1962.[3]

When used to study the heart, much like standard electrocardiography, the Holter monitor records electrical signals from the heart via a series of electrodes attached to the chest. Electrodes are placed over bones to minimize artifacts from muscular activity. The number and position of electrodes varies by model, but most Holter monitors employ between three and eight. These electrodes are connected to a small piece of equipment that is attached to the patient's belt or hung around the neck, keeping a log of the heart's electrical activity throughout the recording period.

Older devices used reel to reel tapes or a standard C90 or C120 audio cassette and ran at a 1.7 mm/s or 2 mm/s speed to record the data. Once a recording was made, it could be played back and analyzed at 60x speed so 24 hours of recording could be analyzed in 24 minutes. More modern units record an EDF-file onto digital flash memory devices. The data is uploaded into a computer which then automatically analyzes the input, counting ECG complexes, calculating summary statistics such as average heart rate, minimum and maximum heart rate, and finding candidate areas in the recording worthy of further study by the technician.

Each Holter system consists of two basic parts – the hardware (called monitor or recorder) for recording the signal, and software for review and analysis of the record. Advanced Holter recorders are able to display the signal, which is very useful for checking the signal quality. Very often there is also a “patient button” located on the front site allowing the patient to press it in specific cases such as sickness, going to bed, taking pills…. A special mark will be then placed into the record so that the doctors or technicians can quickly pinpoint these areas when analyzing the signal.

The size of the recorder differs depending on the manufacturer of the device. The average dimensions of today’s Holter monitors are about 110x70x30 mm but some are only 61x46x20 mm and weigh 99 g.[4] Most of the devices operate with two AA batteries. In case the batteries are depleted, some Holters allow their replacement even during monitoring.

Most of the Holters monitor the ECG just in two or three channels. Depending on the model (manufacturer), different counts of leads and lead systems are used. Today’s trend is to minimize the number of leads to ensure the patient’s comfort during recording. Although 2/3 channel recording has been used for a long time in the Holter monitoring history, recently 12 channel Holters have appeared. These systems use the classic Mason-Likar lead system, thus producing the signal in the same representation as during the common rest ECG and/or stress test measurement. These Holters then allow to substitute stress test examination in cases the stress test is not possible for the current patient. They are also suitable when analyzing patients after myocardial infarction. Recordings from these 12-lead monitors are of a significantly lower resolution than those from a standard 12-lead ECG and in some cases have been shown to provide misleading ST segment representation, even though some devices allow setting the sampling frequency up to 1000 Hz for special-purpose exams like the late potential.

Another interesting innovation is the presence of a triaxial movement sensor, which records the patient physical activity, and later shows in the software three different statuses: sleeping, standing up, or walking. This helps the cardiologist to better analyze the recorded events belonging to the patient activity and diary. Holter monitoring is a very useful part of an ECG.

Some modern devices also have the ability to record a vocal patient diary entry that can be later listened to by the doctor. 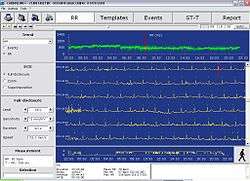 When the recording of ECG signal is finished (usually after 24 or 48 hours), it is up to the physician to perform the signal analysis. Since it would be extremely time demanding to browse through such a long signal, there is an integrated automatic analysis process in the software of each Holter device which automatically determines different sorts of heart beats, rhythms, etc. However the success of the automatic analysis is very closely associated with the signal quality. The quality itself mainly depends on the attachment of the electrodes to the patient body. If these are not properly attached, electromagnetic disturbance can influence the ECG signal resulting in a very noisy record. If the patient moves rapidly, the distortion will be even bigger. Such record is then very difficult to process. Besides the attachment and quality of electrodes, there are other factors affecting the signal quality, such as muscle tremors, sampling rate and resolution of the digitized signal (high quality devices offer higher sampling frequency).

The cardiac event monitor has been used for over twenty years. At first, these devices were not portable and had to be used only in hospital buildings. Advances resulted in these devices becoming smaller but were still being used only in hospitals for twenty four to forty eight hours. Soon portable monitors were developed weighing at first thirty pounds, then 10 pounds, and 1 pound. Modern devices are much easier to wear, weighing only a fraction of a pound.

Although some patients may feel uncomfortable about a Holter examination, there is nothing to worry about. No hazards are involved, and it should have little effect on one's normal daily life.

The recording device can be worn in a case on a belt or on a strap across the chest. The device may be visible under light clothing, and those wearing a Holter monitor may wish to avoid shirts with a low neckline.

Persons being monitored should not limit normal daily activities, since its purpose is to record how a heart works under various actual conditions over an extended period. It is an electrical device, however, and should be kept dry; showering or swimming should probably be avoided. Monitors can be removed for a few minutes without invalidating collected data, but proper reattachment is critical to avoid degradation of its signals. Beyond changing batteries, one should leave its handling to trained personnel.