The Fukuchiyama Line (福知山線, Fukuchiyama-sen) is a railway line operated by West Japan Railway Company (JR West) connecting Osaka and Fukuchiyama, Japan. Within JR West's "Urban Network" covering the Osaka-Kobe-Kyoto metropolitan region, the line from Osaka to Sasayamaguchi is also called the JR Takarazuka Line (JR宝塚線). The line traverses the cities of Kawanishi and Takarazuka in the northwestern corner of the Osaka metropolitan area.

Although Amagasaki is the line's official southeastern terminus, all trains continue east to Osaka and beyond on the JR Kōbe Line, or to the Gakkentoshi Line via the JR Tōzai Line. 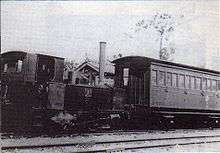 The Japanese Government Railways (JGR) opened the Osaka - Kobe section of what is now the Tokaido Main Line in 1874 as a dual track line.

The Kawabe Horsecar Railway (川辺馬車鉄道, Kawabe Bashatetsudō) opened a 762mm gauge line between Amagasaki and Itami (about 8 km) in 1891. In 1893, the horsecar railway was reorganized as Settsu Railway (摂津鉄道, Settsu Tetsudō), which introduced steam power to the railway and extended the line to Ikeda.

CTC signalling was commissioned between Fukuchiyama and Sasayamaguchi in 1982, extended to Hirono in 1984 and to Amagasaki in 1986. 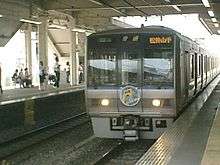 On April 25, 2005, a seven-car 207 series train on a Rapid service derailed and crashed into a building between Tsukaguchi and Amagasaki on its way for Doshisha-mae via the JR Tōzai Line and the Katamachi Line (see: Amagasaki rail crash). 107 passengers were killed in the accident. Operations on the affected part of the line remained suspended until trial runs began on June 7, 2005. Passenger service resumed on June 19, 2005.

The train involved was train number 5418M, a limited-stop "Rapid" commuter service from Takarazuka to Dōshisha-mae. It was a seven-car 207 series electric multiple unit (EMU) formation consisting of a 4-car set and a 3-car set coupled together as shown below, with car 1 leading.[1] The train was carrying approximately 580 passengers at the time of the accident.[1]