The Military Department of the State of Connecticut's principle public responsibility is to serve as the protector of American citizens of the State and their property in time of war, invasion, rebellion, riot or disaster. It serves as the main resource for the Governor in ensuring public safety in a variety of emergencies. [3] 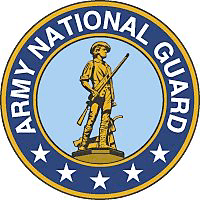 The Federal mission assigned to the National Guard is: "To provide properly trained and equipped units for prompt mobilization for war, National Emergency or as otherwise needed."

The state mission assigned to the National Guard is "To provide trained and disciplined forces for domestic emergencies or as otherwise provided by state law."

The Connecticut National Guard bestows a number of decorations for services to or on behalf of the state.

The Connecticut Army National Guard was originally formed in 1672. During the War of 1812, the Federalist state government refused to place the state militia under control of the Democratic-Republican national government, which resulted in friction, especially following British attacks on New London and Stonington. The Militia Act of 1903 organized the various state militias into the present National Guard system.

After 1968, the main formation in the state became the 43rd Infantry Brigade of the 26th Infantry Division.

The Connecticut Air National Guard traces its history back to World War I with the beginnings also of the United States Army Air Service. It comprises approximately 1,200 airmen and officers assigned to the 103d Airlift Wing and 103rd Air Control Squadron. The 103d Airlift Wing is based in East Granby at the Bradley Air National Guard Base at Bradley International Airport.

Known as the "Flying Yankees", the 103d Airlift Wing is the third-oldest Air National Guard unit in the United States with a history dating back to World War I.[6] Until 2008, the organization was known as the 103rd Fighter Wing (103 FW), operationally gained by the Air Combat Command (ACC) and equipped with A-10 Thunderbolt aircraft. As a result of Base Realignment and Closure (BRAC) actions, the wing's A-10 fighter aircraft were reassigned to other units and the 103rd reequipped with C-21 Learjet aircraft as a "placeholder" flying mission under the Air National Guard's VANGUARD[7] program until the 103rd's next flying mission could be determined. Following this change in mission, the unit was redesignated the 103rd Airlift Wing and placed under the operational claimancy of Air Mobility Command (AMC).

The Connecticut Air National Guard counts one astronaut amongst its former members, Jack Swigert, who flew on Apollo 13. Swigert served with the CT ANG from April 1960 to October 1965.[9]

The State Defense Force is a military entity authorized by both the State Code of Connecticut and Executive Order. The State Defense Force (SDF) is the state’s authorized militia and assumes the state mission of the Connecticut National Guard in the event the Guard is mobilized. The SDF comprises retired active and reserve military personnel and selected professional persons who volunteer their time and talents in further service to their state.

Connecticut's state defense force consists of four active units known as the Governor's Guards. There are two foot guard units and two horse guard units that preserve the lineage and heritage of Connecticut's infantry and cavalry units since the colonial period. While all four companies are primarily ceremonial, the horse companies do drill in mounted search and rescue.[10] The First Company of the Horse Guard was created in 1788 as the Independent Volunteer Troop of Horse Guards in Hartford.[11] A second Horse Guard company was created in 1808 in New Haven.[12] Both were created to serve and protect the governor between his travels between New Haven and Hartford.[13]

The Naval militia of the state remains an authorized force by state statute, but has been inactive for several decades with no current membership.

The Agency traces its roots to May 11, 1637, when the General Courts of the Colony of Connecticut established a military arm of the government. This arm of the colony's government was responsible for overseeing and regulating the militiamen of the colony. Agency personnel participated in several wars with Native Americans as well as with and against European colonial powers.

After the American Revolution, the new State of Connecticut established the office of the Adjutant General in 1792 to oversee the Armed Forces of the State. Units of the Connecticut State Militia participated in all wars of the United States.