The leadership of the West Virginia National Guard includes:

Hanover, WV, May 29, 2009 – West Virginia National Guard troops clear flood debris from the side of the highway.

WVARNG Quick Reaction Force train in Washington, D.C., prior to the 2009 Presidential inauguration.

The WVARNG has a three-fold mission:

Two units of the West Virginia Army National Guard, the 150th Cavalry Regiment and the 201st Field Artillery Regiment, are among the nineteen Army National Guard units with campaign credit for the War of 1812. The 150th Infantry Regiment served with the 38th Infantry Division between the wars, served in the Panama Canal Zone during World War II, and was an armoured cavalry regiment for a time after World War II.

West Virginia is also home to the 249th Army Band, stationed in Morgantown, WV. The band's history dates back to the turn of the century when it consisted of two bands, the 201st Infantry Band in Morgantown, WV and the 150th Infantry Band in Bluefield, WV. Upon release from federal service in World War Two, these two bands were consolidated into the current 249th and was stationed in Fairmont, West Virginia. In 1995, the 249th was stationed in Morgantown. The band is made up of members from throughout the state as well as surrounding states. These personnel make up a Concert Band, Ceremonial Band, Jazz Ensemble, Rock Band, and several other small ensembles including, but not limited to, a Brass Choir, Jazz Quartet, and Percussion Ensemble.

The West Virginia Air National Guard was officially federally recognized on March 7, 1947, as the 167th Fighter Squadron, based at Kanawha Airport in Charleston. During the early years of the 167th, it flew the T-6 Texan trainer, P-51 Mustang and P-47 Thunderbolt. The unit was activated October 10, 1950 during the Korean War, and was designated the 167th Fighter Bomber Squadron when it returned on July 10, 1952. In December 1955, the unit was redesignated as the 167th Fighter Interceptor Squadron, and relocated to Eastern West Virginia Region Airport in Martinsburg, WV. 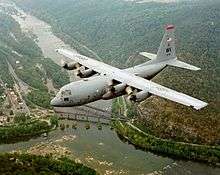 On 13 May 2005, the Department of Defense released its Base Realignment and Closure, 2005 (BRAC) report, and the 130th Airlift Wing was one of the units slated to be eventually decommissioned. Its complement of eight C-130H aircraft would be realigned to Pope Air Force Base, and its complement of expeditionary combat support (ECS) personnel to the 167th Airlift Wing.

Upon learning of this, several former commanders of the 130th Airlift Wing along with members of the local Kanawha County Commission and the Yeager Airport Board of Directors formed the Keep 'Em Flying grassroots organization to try to prevent the unit from being decommissioned. Following an outpouring of community support, money was raised for newspaper ads and radio ads, and to hire analysts familiar with BRAC, all in an attempt to save the unit. On June 13, 2005, members of the BRAC commission came to Charleston to evaluate the base and talk to General Tackett, Governor Joe Manchin, Senator Robert Byrd, Congresswoman Shelley Moore Capito and Col. Bill Peters, Jr., former commander of the 130th and chair for Keep 'Em Flying.

Following this visit, and taking in all the information that was presented to them during that time, the BRAC commission voted unanimously, 9–0, to keep the unit intact.

Since the September 11 attacks on New York City and Washington, D.C., the unit has had members deployed to the Afghan and Iraq wars. Unit members have received six Bronze Stars and two Purple Hearts in support of these operations. In December 2006, the 167th received its first C-5 Galaxy, out of a total of 11 aircraft. On February 2012, the Force Structure Overview was released by the Secretary of the Air Force. The document detailed numerous aircraft changes throughout the active, Guard and Reserve forces, including the replacement of the unit's C-5 aircraft with C-17s. On September 25, 2014, the 167th Airlift Wing flew its final C-5 mission, a local training sortie. That same day the wing received its first C-17 Globemaster III aircraft, one of eight C-17s the unit is slated to receive.[2]