The Virginia Army National Guard is composed of approximately 7500 soldiers and maintains 46 armories in communities throughout the Commonwealth.

The Virginia National Guard provides the premier ready, relevant, and responsive Army and Air National Guard and Virginia Defense Force (personnel and units) to support and defend the Constitution of the United States and the Constitution of the Commonwealth of Virginia. The forces must anticipate requirements and rapidly deploy where directed while executing the orders of the President of the United States and the Governor of Virginia in order to save lives, protect people and property, ensure safety and relieve suffering.

Virginia Army National Guard units are trained and equipped as part of the United States Army. The same enlisted ranks and officer ranks and insignia are used and National Guardsmen are eligible to receive all United States military awards. The Virginia Guard also bestows a number of state awards for local services rendered in or to the commonwealth of Virginia.

The HHT/2-183rd Cavalry and the 276th Engineer Battalion are two of only nineteen Army National Guard units with campaign credit for the War of 1812. 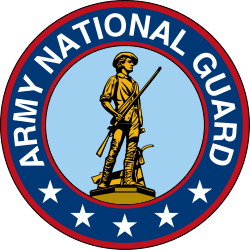 National Guard units can be mobilized at any time by presidential order to supplement regular armed forces, and upon declaration of a state of emergency by the governor of the state in which they serve. Unlike Army Reserve members, National Guard members cannot be mobilized individually (except through voluntary transfers and Temporary DutY Assignments TDY), but only as part of their respective units.

For much of the final decades of the twentieth century, National Guard personnel typically served "One weekend a month, two weeks a year", with a portion working for the Guard in a full-time capacity. The current forces formation plans of the US Army call for the typical National Guard unit (or National Guardsman) to serve one year of active duty for every five years of service. More specifically, current Department of Defense policy is that no Guardsman will be involuntarily activated for a total of more than 24 months (cumulative) in one six year enlistment period (this policy is due to change 1 August 2007, the new policy states that soldiers will be given 24 months between deployments of no more than 24 months, individual states have differing policies). Since September 11, 2001, over 15,700 Virginia Guard personnel have been deployed.