The Maryland Army National Guard (MD ARNG) is the United States Army component of the American state of Maryland. It is headquartered at the old Fifth Regiment Armory at the intersection of North Howard Street, 29th Division Street, near Martin Luther King, Jr. Boulevard in Baltimore and has additional units assigned and quartered at several regional armories, bases/camps and other facilities across the state.

The Maryland Army National Guard is organized into several major subordinate commands: the 58th Battlefield Surveillance Brigade (United States); the Combat Aviation Brigade, 29th Infantry Division; the 70th Regiment, a training unit; and the 58th Troop Command. The MSCs report to the Assistant Adjutant General for Army (TAAG-Army), who in turn reports to the Adjutant General (TAG). Both officers are appointed by the governor.

The Maryland National Guard traces its roots through the long-time previous colonial and state militia to March 1634, with the landing of two English militia captains from the two settlement expeditionary ships, the "Ark" and the "Dove" off the north shore of the Potomac River near the confluence with Chesapeake Bay at the first provincial capital, St. Mary's City in later St. Mary's County. It has a long and illustrious history.

During the American Revolution, members of the "Maryland Line" repeatedly charged a vastly superior British force at the Battle of Long Island, buying time for the Continental Army to escape. It is from this incident that Maryland draws one of its official nicknames, "The Old Line State." This was the first time the American Army had used the bayonet in combat. Later in the war, the Maryland militia made a number of additional bayonet charges, including at Cowpens, where their charge turned impending defeat into victory, and at Guilford Courthouse, where they forced the elite British Foot Guards to retreat. 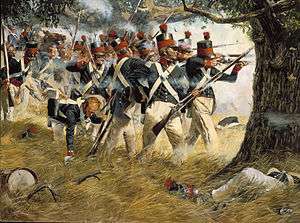 Maryland Militia at the Battle of North Point, 1814.

During the War of 1812, the Maryland militia held the line at the Battle of North Point in 1814, commanded by Brigadier General John Stricker. There, they held up the British attack for two hours, long enough for the defense of Baltimore to be shored up. The British forces, many of whom were veterans of the Napoleonic Wars took around 300 casualties and, though the Americans retreated from the field at North Point, the British would eventually turn back rather than attempt an assault on the American defenses at Baltimore.[2] Not all the militia regiments performed with equal distinction. The 51st, and some members of 39th, broke and ran under fire. However, the 5th and 27th held their ground and were able to retreat in good order having inflicted significant casualties on the advancing enemy.[3] The 175th Infantry (ARNG MD), derived from the 5th Regiment, is one of only nineteen Army National Guard units with campaign credit for the War of 1812.

Main article: History of the Maryland Militia in the Civil War 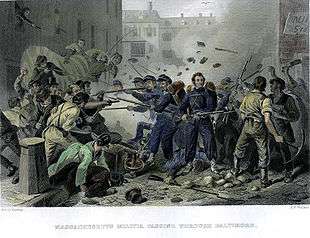 In 1833 a number of Baltimore regiments were formed into a brigade, and Steuart was promoted from colonel to brigadier general.[5] From 1841 to 1861 he was Commander of the First Light Division, Maryland Volunteer Militia.[4] Until the Civil War he would be the Commander-in-Chief of the Maryland Volunteers.[6][7] The First Light Division comprised two brigades: the 1st Light Brigade and the 2nd Brigade. The First Brigade consisted of the 1st Cavalry, 1st Artillery, and 5th Infantry regiments. The 2nd Brigade was composed of the 1st Rifle Regiment and the 53rd Infantry Regiment, and the Battalion of Baltimore City Guards.[8]

By April 1861 it had become clear that war was inevitable. On April 16 Steuart's son, George H. Steuart, then an officer in the United States Army, resigned his captain's commission to join the Confederacy.[9] On April 19 Baltimore was disrupted by riots, during which Southern sympathizers attacked Union troops passing through the city by rail. Steuart's son commanded one of the Baltimore city militias during the disturbances of April 1861, following which Federal troops occupied the city. In a letter to his father, the younger Steuart wrote:

"I found nothing but disgust in my observations along the route and in the place I came to - a large majority of the population are insane on the one idea of loyalty to the Union and the legislature is so diminished and unreliable that I rejoiced to hear that they intended to adjourn...it seems that we are doomed to be trodden on by these troops who have taken military possession of our State, and seem determined to commit all the outrages of an invading army."[10]

Steuart himself was strongly sympathetic to the Confederacy and, perhaps knowing this, Governor Hicks did not call out the militia to suppress the riots.[11] On May 13, 1861 Union troops occupied the state, restoring order and preventing a vote in favour of Southern secession. Steuart moved south for the duration of the American Civil War, and much of the general's property was confiscated by the Federal Government as a consequence. Old Steuart Hall was confiscated by the Union Army and Jarvis Hospital was erected on the estate, to care for Federal wounded.[12] However, many members of the newly formed Maryland Line in the Confederate army would be drawn from the state militia.[13] 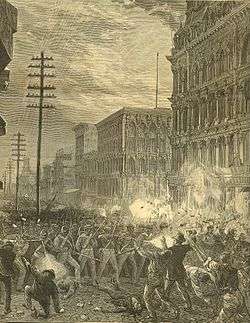 During the Great Railroad Strike of 1877, on July 20 Governor Carroll called up the 5th and 6th Regiments from Baltimore to stop strikers in Cumberland from disrupting rail service. While marching from their armories to a Baltimore and Ohio Railroad train at Camden Station, an armed mob attacked the troops. The 6th Regiment fired on the mob, killing 10 and wounding 25, and several members of both regiments were injured by stones and bricks.[14] The troops were then besieged by 15,000 rioters inside Camden Yards until the arrival of federal troops in Baltimore. The building, now part of Camden Yards baseball stadium, still bears bullet holes from rioters firing at troops inside.

In response to Pancho Villa’s cross-border raids, the Maryland National Guard was called up in 1916 and deployed for seven months to the town of Eagle Pass, Texas, on the Mexican border.[15]

During the First World War, most Maryland National Guard troops served as part of the 29th Division, and their campaign credits include Meuse-Argonne. In addition, the 1st Separate Company, an all-black unit, served as part of the 372nd Infantry Regiment, although ostensibly assigned to the 93rd Division, actually fought under French control. One of the Maryland National Guard's longest-mobilized units during the war was the 117th Trench Mortar Battery, which served under the 42nd Division from October 1917 until the end of the war. It was the first Maryland unit to see combat, and participated in all of the AEF's major battles during that period.

World War II also saw the mobilization of the Maryland National Guard. Again, most were assigned to the 29th Infantry Division, where they took part in the D-Day landings and fought their way across France and Germany. In 1945, they missed being the first unit to link up with the Soviet Red Army on the Elbe River by a matter of hours.

The Maryland National Guard had very few troops mobilized for the Korean War, but those that were played an important role. The 231st Transportation Truck Battalion was the first National Guard unit to land in Korea, and were immediately put to use keeping supplies flowing within the Pusan Perimeter. Originally a segregated, all-black unit, the 231st was integrated during this service in Korea, only to be again segregated when it returned to state status.

Although no Maryland Army National Guard units served in Vietnam, the Maryland Army Guard played a significant role during the Cold War. Across the state, Nike missile batteries, armed with nuclear warheads, were manned by Maryland National Guardsmen to defend the National Capital area from Soviet bombers from the mid-1950s until the early 1970s. Maryland National Guard troops were also kept busy with riot-control duty in the 1960s and early 1970s, most notably during the Baltimore Riots of 1968, the Salisbury riots of May, 1968, the University of Maryland student riots of 1970-72, and the Cambridge Riots of 1963 and 1967.[16]

Since the September 11 attacks, the Maryland Army National Guard has mobilized a number of units, including the 58th Infantry Brigade Combat Team, for service in Iraq; Afghanistan; Guantanamo Bay, Cuba; and Kosovo. Guardsmen from the 115th Military Police Battalion were among the first and most heavily called upon, having arrived at the Pentagon on September 12 and subsequently served in Iraq, Afghanistan, and Guantanamo Bay. Maryland elements of the Combat Aviation Brigade, 29th Infantry Division served in Iraq, Maryland elements of the Combat Aviation Brigade, 42nd Infantry Division served in Afghanistan, and Maryland National Guard elements were attached to 44th Medical Brigade/XVIII Airborne Corps for service in Iraq. Maryland is also home to several Special Operations units, most notably Company B, 2nd Battalion, 20th Special Forces Group (Airborne) and Special Operations Detachment, Joint Forces. Members of these units have both been mobilized to serve in Afghanistan and Iraq, as well as Guantanamo Bay, Cuba. Currently, the Special Operations Detachment, Joint Forces was selected and mobilized to create the Special Operations Command for the newly created United States Africa Command.

Despite the GWOT's call and response for MDARNG units to enlist or volunteer for a Post September 11, 2001, theater of new deployments , MDARNG left many wounded soldiers who served in OEF and OIF with no benefits for periods of up and over a decade after soldiers injuries occurred; injuries such as Post Traumatic Stress Disorder [PTSD], Traumatic Brain Injury [TBI], anatomical losses were not covered under statue or army regulation/national guard regulation. This epic cycle of information for Post 911 Security Studies does suggest the neglect of the MDARNG against her soldiers was unfortunately the most humiliating de facto loss of the MDARNG's military history and MDARNG's ability to even suggest they are a state organization which can assimilate under both the ideas of a military philosophy and military medical sciences for the war wounded of Post 911 military operations. Under MDARNG's current organizational and command status, MDARNG cannot assimilate these ethical tasks which are required of them in repetitive tedium of being associated with the United States Army in complete fashion that an alethic army of the United States is something which MDARNG can't commit to actively being part of. [17]