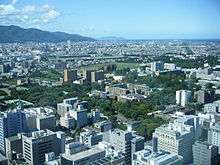 Near the library at Sapporo Campus

Hokkaido University (北海道大学, Hokkaidō daigaku), or Hokudai (北大), is one of the national universities of Japan.[1] It is a member of the National Seven Universities, which were established as the best national higher education or research institute. It is located in downtown Sapporo, just north of Sapporo Station, and stretching approximately 2.4 kilometers northward. It is considered one of the top universities in Japan.

Since 2004 the university has been incorporated as a National University Corporation under a new law which applies to all national universities. Although the incorporation has led to increased financial independence and autonomy, Hokkaido University is still partially controlled by the Japanese Ministry of Education.

In 2014 the university was selected under the Super Global Universities program that began as an initiative of Prime Minister Shinzō Abe who stated its aim was to help more of Japan's universities rank in the top 100 worldwide.[3] Under the program, it is listed in the top university category or Type A—(Top Type) The Top Type is for world-class universities that have the potential to be ranked in the top 100 in world university rankings. Each Type A university will receive ¥420 million ($US 4.2 million) annually[4] until 2023.

The campus is located in Hakodate, the city located in southern part of Hokkaidō. Faculty and Graduate School of Fisheries Science are practiced in this campus. However, the students of Fisheries Science start their education in Hakodate campus from the second semester of their sophomore year, due to the fact that it is required for all freshmen and sophomores at their first semester to take courses in liberal arts at Sapporo campus.

Hokkaido University is one of the most prestigious universities in Japan. It can be seen in the several rankings such as shown below.

The university has been ranked 9th, 10th and 14th in 2008, 2009 and 2010 respectively in the ranking "Truly Strong Universities" by Toyo Keizai.[7] In another ranking, Japanese prep school Kawaijuku ranked Hokkaido as the 9th best university in Japan.[8]

Weekly Diamond reported that Hokkaido has the 10th highest research standard in Japan in terms of research funding per researchers in the COE Program.[28]

In addition, Nikkei Shimbun on 16 February 2004 surveyed the research standards in Engineering studies based on Thomson Reuters, Grants in Aid for Scientific Research and questionnaires to heads of 93 leading Japanese Research Centers, and Hokkaido was placed 17th in this ranking.[29]

According to the Qs World university rankings in September 2012, Hokkaido University was placed 135th (worldwide) and 6th (in Japan) for general standards in engineering and technology.[30]

It also has a good research standard in Economics, as RePec ranked Hokkaido as the 16th best Economics research university in Jan 2011.[18]

The university received attention in 2010 when Professor Akira Suzuki won the Nobel Prize for Chemistry jointly with Richard F. Heck and Ei-ichi Negishi.[31]

Eduniversal ranked Hokkaido as 2nd in the rankings of "Excellent Business Schools nationally strong and/or with continental links " in Japan.[33]

According to the Weekly Economist's 2010 rankings, graduates from Hokkaido have the 49th best employment rate in 400 major companies in Japan.[34]

Hokkaido is one of the most selective universities in Japan. Its entrance difficulty is usually considered as one of the top in Japan.[35][36]