Not to be confused with Ritsumeikan Asia Pacific University.

Ritsumeikan University (立命館大学, Ritsumeikan Daigaku, abbreviated to Rits and 立命 Ritsumei) is a private university in Kyoto, Japan, that traces its roots to 1869. With the Kinugasa Campus(KIC) in Kyoto, and Kyoto Prefecture. the university also has a satellite called Biwako-Kusatsu Campus (BKC) and Osaka-Ibaraki Campus(OIC).

Ritsumeikan was first founded as a private academy in 1869 by Prince Saionji Kinmochi. In 1900, Kojuro Nakagawa (the former secretary of Prince Saionji) established the Kyoto Hosei School, a law school that eventually adopted the Ritsumeikan name (with the prince's permission) and was awarded full university status in 1922.[2] Historically, the school was seen as a liberal alternative to the state-run Kyoto University.

The name "Ritsumeikan" comes from a Mencius quotation:

Some die young, as some live long lives. This is decided by fate. Therefore, one's duty consists of cultivating one's mind during this mortal span and thereby "establishing one's destiny". (in Japanese, 立命, ritsumei)

The "kan" addition to "ritsumei" signifies a place.

Colleges and graduate schools (by campus) 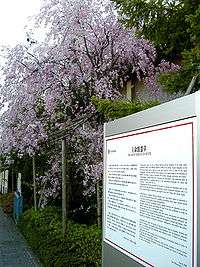 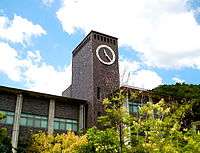 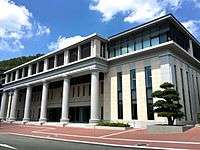 In Kita-ku, Kyoto, this liberal arts-oriented campus is a roughly five-minute walk from Ryōan-ji and Kinkaku-ji temples. The campus has eight graduate schools, 17,000 undergraduate and 1,100 graduate students.[3]

Biwako-Kusatsu Campus is in Kusatsu, Shiga. This technology-oriented campus is southeast of Lake Biwa, the largest freshwater lake in Japan, and is a 30-minute train ride from Kyōto Station. The campus has four undergraduate colleges, four graduate schools, 16,000 undergraduates and 1,600 graduate students. 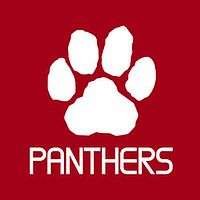 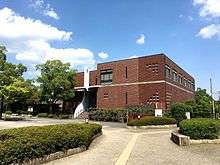 Established in April 2005 on the Biwako-Kusatsu Campus, work at this center focuses on disaster mitigation using sensor systems and computer networks.

Located at Kinugasa Campus, this center houses the Digital Humanities Center for Japanese Arts and Cultures, which focuses on research on Japanese art and culture using digital archives, databases and geographical information systems.

The Kyoto Museum for World Peace seeks to critically examine Japan’s militaristic past, and includes numerous exhibits ranging from the Sino-Japanese War of 1894-5 to the Iraq War.

Located at BKC campus, this center is established for research using Synchrotron Radiation.[9]

As of 2006, Ritsumeikan University and the General Union were in dispute over a contract system that limited employment for some educators to three years.[10]