The university originated in a school of law, Tōkyō Hōgakusha (東京法学社, i.e. Tokyo association of law), established in 1880, and the following year renamed Tōkyō Hōgakkō (東京法学校, i.e. Tokyo school of law). This was from 1883 headed by Dr. Gustave Emile Boissonade, and was heavily influenced by the French legal tradition. It merged in 1889 with a school of French studies, Tōkyō Futsugakkō (東京仏学校, i.e. Tokyo French school), that had been founded three years earlier. It adopted the name Hosei University (法政大学, Hōsei daigaku, i.e. Tokyo university of law and politics) in 1903 and was recognized as a private university in 1920.

Other notable figures involved in its foundation include Dr. Masaaki Tomii, and Dr. Ume Kenjirō, "Father of the Japanese Civil Code".

In addition, Hosei University belongs to Tokyo Big6 Baseball League. The league is one of the most traditional college sports leagues in Japan. Hosei University is popular for high school students. Hosei University got 3rd in the number of applicants among Japanese universities in 2008, 2009 and 2011 (92,819). Hosei University ranked 100 at Global Executives 2013 top 100 by The Times Higher Education.

Hosei University's Boissonade Tower (in the distance, slightly left of center), seen alongside sotobori (the remains of the outer moat of Edo castle) from the bridge next to Ichigaya Station

Hosei has three main campuses, which it calls Ichigaya, Koganei, and Tama. The Ichigaya campus is halfway between Ichigaya and Iidabashi stations in central Tokyo; its 26-story Boissonade Tower, completed in 2000, can be seen from either station. The campus has a city flavour but is still somewhat isolated from central Tokyo; the nearby presence of Yasukuni Shrine also contributes.

Sciences are studied at the Koganei campus to the west of Tokyo, and other subjects are split between Tama (located in Machida, which is near Hachiōji, and Ichigaya. 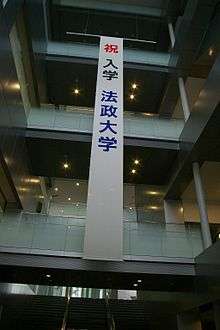 A banner hangs in the atrium of Sotobori building on the Ichigaya campus, welcoming new students

* dropped out before graduation

With what they taught (or teach), which may be different from what they are more widely known for.

The university's baseball team plays as one of the Tokyo Big Six league.