Toyo University (東洋大学, Tōyō Daigaku) is a university with several branches in Japan, including Bunkyō, Tokyo, Asaka, Kawagoe, and Itakura. 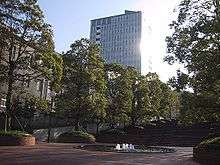 The predecessor to Toyo University was Shiritsu Tetsugakukan (私立哲学館), which was founded at Rinsho-in Temple by Enryo Inoue in 1887. Inoue felt that the subject of philosophy was neglected in Japanese schools of higher learning at the time.[1] In 1906, the school was moved to its present site (Hakusan Campus) and its name was changed to Toyo University. The school's motto is "The basis of all learning lies in philosophy".

Originally, courses were offered in philosophy, religion, ethics, education, Japanese, and classical Chinese, and the school continued to expand over time. In 1949, there was a substantial restructuring of the university, and faculties of Literature, Economics, Law, Sociology, Engineering and Business Administration were established. Each of these faculties has a graduate program. Faculties of Regional Development Studies and Life Sciences were added in April, 1997. A law school was created in April 2004, and the Kawagoe campus hosts a Bio-Nano Electronics Research Centre[2] founded in 2003. Among those conducting research at this facility was Nobel Laureate Sir Harold Kroto (7 October 1939 – 30 April 2016). Toyo University [3]consists of eleven graduate schools, one postgraduate law faculty, eleven undergraduate faculties, forty four departments, various research institutes, and five affiliated high schools, serving a combined student body of more than 30,000 students.