He is often nicknamed "Cha Cha Cha" for his dance-like moves on the pitch.[2] Noted columnist Tim Vickery describes him as "an out-and-out goalscorer, a front-to-goal centre-forward who can finish off both feet."[3] He was Primeira Liga's top scorer in all three of his seasons at FC Porto.

Martínez has represented Colombia at international level since 2009, playing at the 2011 and 2015 Copa América, as well as the 2014 FIFA World Cup.

In 2009, Martínez was the top goalscorer in the top-tier Categoría Primera A in Colombia, with 18 goals. He also led Independiente Medellín to its fifth league title.

After several seasons in Colombia, Martínez attracted interest from teams in Argentina and Mexico, and was eventually signed by Chiapas from the Liga MX. He ended the first season with nine goals, placing him fourth in the top scorer's table. In the Copa Libertadores 2011, Martínez was a key player for Chiapas as they reached the quarter-finals. He was named captain of the squad at the beginning of the Clausura 2012 season, finishing the season scoring over 30 goals for the season. Along with his performances for the Colombian national team, his outstanding performances in Mexico subsequently led to interest from Portuguese team FC Porto. 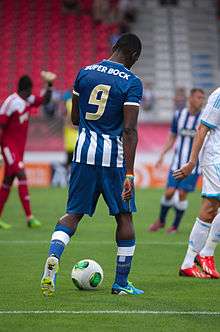 Martínez in match with Porto.

On 7 July 2012, Martínez signed with Porto for US$11 million.[4][5] On 11 August, he played his first competitive match for the Portuguese team in the 2012 Supertaça Cândido de Oliveira against Académica de Coimbra, also scoring his first goal.[6][7] He would score in the 90th minute which gave Porto their 19th victory of the tournament. He was named as the man of the match.[8]

Martínez scored his first league goal on 25 August from the penalty spot against Vitória de Guimarães in the 80th minute with Porto winning the game 4–0.[9] The second league goal came on 1 September against Olhanense with the game finishing 2–3 for Porto.[10][11] In his next league match against Beira-Mar, he scored a bicycle kick from a chipped pass by fellow countryman James Rodríguez.[12] In the fifth matchweek, Martínez avoided a 2–1 loss for Porto after scoring in the 90th minute in an away game against Rio Ave.[13] Against rivals Sporting CP, he scored with a stunning back heel volley in an 2–0 win.[14][15] During the third round of the 2012–13 UEFA Champions League group stage, Martínez scored his first goal in European competition thanks to an assist by James Rodríguez against Dynamo Kyiv.[16] He scored again in the same match, which ended 3–2 to Porto. Martínez continued his goal streak in a 2–1 victory over Estoril, scoring one goal and assisting the other.[17]

With 11 goals in 12 matches, he eclipsed the record of former Porto strikers Radamel Falcao, Lisandro López and Hulk.[18] He became known as "Jackshow Martínez" in Portugal, which was coined by journalist João Ruela. In the same day, after he scored two more goals in a 5–0 victory against Marítimo, he made the front page in every sports-related newspaper in Portugal.[19] His goal-scoring performances in domestic competitions also resulted in him being named the SJPF Player of the Month for the months of October and November.[20]

In the final round of the year's Champions League group stage, Martínez scored a goal against Paris Saint-Germain in a 2–1 defeat. Despite the loss, Porto advanced to the next round as the second-placed club in their group. Against Moreirense, he scored a goal following an assist from James Rodríguez.

In the beginning of the second half of the league, Martínez scored a header in a 1–0 victory over Nacional. He then played in O Clássico against rivals Benfica, where he scored in a 2–2 draw. In the delayed match against Vitória de Setúbal, Martínez scored a double, one via the penalty spot. In his next match, he sealed a 5–0 victory with a 90th-minute goal against Gil Vicente. He scored a hat-trick against Vitória de Guimarães, which included two headers, making it his first hat-trick for Porto. At the time, he had scored 18 goals in 17 matches in the Primeira Liga. Jackson continued his goal-scoring streak after netting the equaliser in a 1–1 draw with Olhanense, followed up with another against Beira-Mar one week later. Martínez added two more goals against Rio Ave, including a penalty and a volley following a cross by James Rodríguez. For his prolific scoring pace, Martínez was named the February SJPF Player of the Month.[21]

Martínez made his Taça da Liga debut in the 2012–13 Taça da Liga semi-finals against Rio Ave, where he failed to score a goal. Regardless, Porto won the match 4–0 and advanced to the finals. He ended his goal drought in a 0–3 away victory over Moreirense, where he scored a brace.

In the final match of the league season against Paços de Ferreira, Martínez sealed the 2–0 victory after scoring the second goal and assuring Porto's third consecutive league title, finishing just one point ahead of rivals Benfica, who had also won their final match. The goal marked his 26th goal in the league, securing him top goal-scoring honours. With winning the Portuguese SuperCup earlier in the season, finishing as top goal scorer and winning the league title (in just his debut season in Europe), Martínez had a successful season debut.[22][23][24]

ESPN noted Martínez as one of the best signings for the 2012–13 season following his seasonal European debut.[25]

Martínez battling for possession in July 2013.

In the 2013 Supertaça Cândido de Oliveira, Martínez scored the second goal in a 3–0 victory against Vitória de Guimarães at the Estádio Municipal de Aveiro, claiming his second Portuguese SuperCup in a row.

In the opening league match against Vitória de Setúbal, Martínez scored the third goal in a 3–1 win.[26] He scored his second league goal a week later against Marítimo. On 1 September, he scored the only goal in a 0–1 away win against Paços de Ferreira.[27] Martínez scored again the following week in a victory against Gil Vicente, also adding another off a pass from Lucho González in a 2–2 draw with Estoril on 22 September.[28] Martínez then scored a double against recently promoted Arouca in a 3–0 victory.[29]

On 30 September 2014, Martínez came on as a substitute in a Champions League group stage match away to Shakhtar Donetsk, and the Ukrainian hosts gained a 2–0 lead. In the final minute and added time, he scored a penalty and then equalised for the final score of 2–2, which was dubbed "stunning" and "remarkable" by UEFA.[30] In the quarter-final first leg on 15 April 2015, he scored the last goal in a 3–1 victory over Bayern Munich, also being fouled by goalkeeper Manuel Neuer for the penalty that Ricardo Quaresma ultimately converted for the opening goal.[31] Martínez netted again in the second leg six days later, heading a consolation from Héctor Herrera's cross as Porto lost 1–6 in Munich, thus being eliminated from the competition.[32]

Martínez had been reportedly linked with a move to Spanish side Atlético Madrid and on 27 June 2015, he told the press the Madrid side deal was "done," also stating he was "excited about this move."[33] It was later announced by Porto's official website that Atlético would pay the full release fee for Martínez, which would be worth €35 million.[34] On 15 July, Atlético officially announced the transfer.[35] He made his La Liga debut on 22 August, being substituted after an hour for Fernando Torres in a 1–0 home win over UD Las Palmas.[36] A week later, Martínez came off the bench and scored his first goal for Atlético in a 3–0 victory over Sevilla FC.[37]

On 3 February 2016, Martínez transferred to Chinese Super League side Guangzhou Evergrande Taobao with a fee of €42 million, a record for an Asian team.[38][39] The record was broken two days later when Alex Teixeira signed for Jiangsu Suning for £38.4 million (roughly €50 million).[40] On 24 February 2016, he made his debut for Guangzhou Evergrande in the first match against Korean club Pohang Steelers. On 6 March 2016, Martínez scored in his Chinese Super League debut in an eventual 2–1 loss away at Chongqing Lifan.[41] Following his debut, Martínez scored his second goal in as many Chinese Super League games against Changchun Yatai before assisting a goal for Gao Lin.[42]

A Colombian international at the age of 22, he has become a regular feature in his nation's qualification and friendly games. He scored his first international goal on 5 September 2009 against Ecuador in a 2010 FIFA World Cup qualifying match.[43] On 7 June 2011, he was selected by Hernán Darío Gómez to be a part of the squad-of-23 for the 2011 Copa América.[44]

On 2 June 2014, Martínez was named in Colombia's 23-man squad for the 2014 FIFA World Cup.[45] After a substitute appearance in the team's opening match win over Greece, Martínez was selected to start in the final group game against Japan, scoring twice in a 4–1 win.[46]