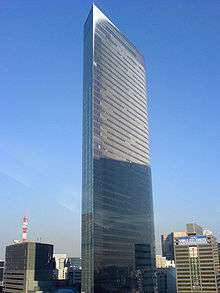 The area was the site of a bridge built across the Shiodome River in 1604. The river was later filled in.[1] Shinbashi was the Tokyo terminus of the first railway in Japan in 1872. It remains a major railway hub and has since developed into a commercial center, most recently with the construction of the Shiodome "Shiosite" high-rise office complex.

Other companies in Shinbashi include: