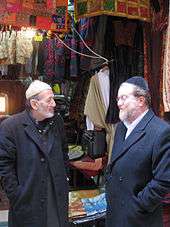 Arab and Jew at Arab bazaar, Old City of Jerusalem 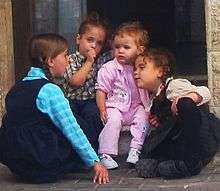 Jerusalem's population size and composition has shifted many times over its 5,000 year history. Since medieval times, the Old City of Jerusalem has been divided into Jewish, Muslim, Christian, and Armenian quarters.

Most population data pre-1905 is based on estimates, often from foreign travellers or organisations, since previous census data usually covered wider areas such as the Jerusalem District.[1] These estimates suggest that since the end of the Crusades, Muslims formed the largest group in Jerusalem until the mid-19th century. Between 1838 and 1876, a number of estimates exist which conflict as to whether Jews or Muslims were the largest group during this period, and between 1882 and 1922 estimates conflict as to exactly when Jews became a majority of the population.

Jerusalemites are of varied national, ethnic and religious denominations and include European, Middle Eastern and African Jews, Georgians, Armenians, and Muslim, Protestant, Greeks, Greek Orthodox Arabs, Syrian Orthodox and Coptic Orthodox Arabs, among others.[2] Many of these groups were once immigrants or pilgrims that have over time become near-indigenous populations and claim the importance of Jerusalem to their faith as their reason for moving to and being in the city.[2]

Jerusalem's long history of conquests by competing and different powers has resulted in different groups living in the city many of whom have never fully identified or assimilated with a particular power, despite the length of their rule. Though they may have been citizens of that particular kingdom and empire and involved with civic activities and duties, these groups often saw themselves as distinct national groups (see Armenians, for example).[2] The Ottoman millet system, whereby minorities in the Ottoman Empire were given the authority to govern themselves within the framework of the broader system, allowed these groups to retain autonomy and remain separate from other religious and national groups. Some Palestinian residents of the city prefer to use the term Maqdisi or Qudsi as a Palestinian demonym.[3]

The tables below provide data on demographic change over time in Jerusalem, with an emphasis on the Jewish population. Readers should be aware that the boundaries of Jerusalem have changed many times over the years and that Jerusalem may also refer to a district or even a subdistrict under Ottoman, British, or Israeli administration, see e.g. Jerusalem District. Thus, year-to-year comparisons may not be valid due to the varying geographic areas covered by the population censuses.

In the Achaemenid Yehud Medinata (Judah Province) the population of Jerusalem is estimated at between 1500 and 2750.[4]

Jerusalem's population prior to the Roman Siege of Jerusalem in 70 (CE) has been variously estimated to be around be 70,398 by Wilkinson in 1974, [5] 80,000 by Broshi in 1978,[6] and 60,000–70,000 by Levine in 2002.[7] According to Josephus, the populations of adult male scholarly sects were as follows: over 6,000 Pharisees, more than 4,000 Essenes and "a few" Sadducees.[8][9] New Testament scholar Cousland notes that "recent estimates of the population of Jerusalem suggest something in the neighbourhood of a hundred thousand".[10] A minimalist view is taken by Hillel Geva, who estimates from archaeological evidence that the population of Jerusalem before its 70 CE destruction was at most 20,000.[11]

During the First Jewish–Roman War(66–73 CE), the population of Jerusalem was estimated at 600,000 persons by Roman historian Tacitus, while Josephus, estimated that there were as many as 1,100,000, who were killed in the war.[12] Josephus also wrote that 97,000 were sold as slaves. After the Roman victory over the Jews, as many as 115,880 dead bodies were carried out through one gate between the months of Nisan and Tammuz.[13]

Henry Light, who visited Jerusalem in 1814, reported that Muslims comprised the largest portion of the 12,000 person population, but that Jews made the greatest single sect.[17] In 1818, Robert Richardson estimated the number of Jews to be 10,000, twice the number of Muslims.[18][19] 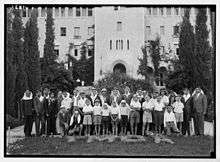 Between 1838 and 1876, conflicting estimates exist regarding whether Muslims or Jews constituted a "relative majority" (or plurality) in the city.

Writing in 1841, the biblical scholar Edward Robinson noted the conflicting demographic estimates regarding Jerusalem during the period, stating in reference to an 1839 estimate attributed to the Moses Montefiore: "As to the Jews, the enumeration in question was made out by themselves, in the expectation of receiving a certain amount of alms for every name returned. It is therefore obvious that they here had as strong a motive to exaggerate their number, as they often have in other circumstances to underrate it. Besides, this number of 7000 rests merely on report; Sir Moses himself has published nothing on the subject; nor could his agent in London afford me any information so late as Nov. 1840."[27] In 1843, Reverend F.C. Ewald, a Christian traveler visiting Jerusalem, reported an influx of 150 Jews from Algiers. He wrote that there were now a large number of Jews from the coast of Africa who were forming a separate congregation.[28]

Between 1856 and 1880, Jewish immigration to Palestine more than doubled, with the majority settling in Jerusalem.[29] The majority of these immigrants were Ashkenazi Jews from Eastern Europe, who subsisted on Halukka.[29]

In 1881–82, a group of Jews arrived from Yemen as a result of messianic fervor.[30][31] After living in the Old City for several years, they moved to the hills facing the City of David, where they lived in caves.[32] In 1884, the community, numbering 200, moved to new stone houses built for them by a Jewish charity.[33]

Jews as absolute or relative majority

Population of Jerusalem by religion.

These official Israeli statistics refer to the expanded Israel municipality of Jerusalem. This includes not only the area of the pre-1967 Israeli and Jordanian municipalities, but also outlying Palestinian villages and neighbourhoods east of the city, which were not part of Jordanian East Jerusalem prior to 1967. Demographic data from 1967 to 2012 showed continues growth of Arab population, both in relative and absolute numbers, and the declining of Jewish population share in the overall population of the city. In 1967, Jews were 73.4% of city population, while in 2010 the Jewish population shrank to 64%. In the same period the Arab population increased from 26,5% in 1967 to 36% in 2010.[52][53] In 1999, the Jewish total fertility rate was 3.8 children per woman, while the Palestinian rate was 4.4. This led to concerns that Arabs would eventually become a majority of the city's population.

Between 1999 and 2010, the demographic trends reversed themselves, with the Jewish fertility rate increasing and the Arab rate decreasing. In addition, the number of Jewish immigrants from abroad choosing to settle in Jerusalem steadily increased. By 2010, there was a higher Jewish than Arab growth rate. That year, the city's birth rate was placed at 4.2 children for Jewish mothers, compared with 3.9 children for Arab mothers. In addition, 2,250 Jewish immigrants from abroad settled in Jerusalem. The Jewish fertility rate is believed to be still currently increasing, while the Arab fertility rate remains on the decline.[54]