Noble was born in Lancaster, Ohio,[1] and attended Miami University.[2] In 1851, he graduated from Yale University[1] with honors. He then studied law at Columbus and Cincinnati, moved to St. Louis in 1855, and a year later settled in the practice of his profession at Keokuk, Iowa. There he took a prominent part in politics.[2] At the outbreak of the Civil War, he was city attorney for Keokuk,[1] which position he had assumed in 1859.[2]

After the outbreak of the American Civil War Noble was commissioned as a lieutenant in the 3rd Iowa Cavalry in September 1861. He rose through the ranks and became the regiment's commander with the rank of colonel in June 1864. At the war's end he received a brevet (honorary promotion) to brigadier general and was mustered out of service in August 1865. [3]

After the war, he became a companion of the Missouri Commandery of the Military Order of the Loyal Legion of the United States, a military society of officers of the Union armed forces and their descendants. He settled in St. Louis, Missouri, where he was appointed U.S. Attorney for the United States District Court for the Eastern District of Missouri and served from 1867 to 1870.[1][2]

He served as Secretary of the Interior throughout the entire Benjamin Harrison administration. Under his watch as Secretary of the Interior, the Cherokee Commission negotiated eleven agreements that removed nineteen indigenous tribes to small allotments in the Oklahoma Territory, while opening the land to homesteaders.[4] He later resumed the practice of law in St. Louis and died there in 1912.[1] He was buried at Bellefontaine Cemetery.

The "General Noble" Giant Sequoia was named for this Secretary of the Interior.[6] 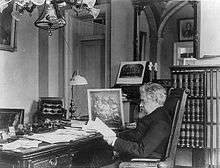 John W. Noble in his office.
This article is issued from Wikipedia - version of the 11/6/2016. The text is available under the Creative Commons Attribution/Share Alike but additional terms may apply for the media files.