Jacob Thompson (May 15, 1810 – March 24, 1885) was the United States Secretary of the Interior, who resigned on the outbreak of the American Civil War, to become Inspector General of the Confederate States Army.

In 1864, Jefferson Davis asked Thompson to lead a delegation to Canada, where he appears to have been leader of the Confederate Secret Service. From here, he is known to have organised many anti-Union plots and was suspected of many more, including a possible meeting with Lincoln’s assassin, John Wilkes Booth.

Union troops burned down his mansion in Oxford, Mississippi, the hometown of William Faulkner, who based some of his fictional characters on Thompson.

Born in Leasburg, North Carolina in 1810, Thompson attended Bingham Academy in Orange County, North Carolina and later went on to graduate from the University of North Carolina in 1831, where he was a member of the Philanthropic Society. Afterwards, he served on the university faculty for a short time until he left to study law in 1832. He was admitted to the bar in 1834 and commenced practice in Pontotoc, Mississippi. 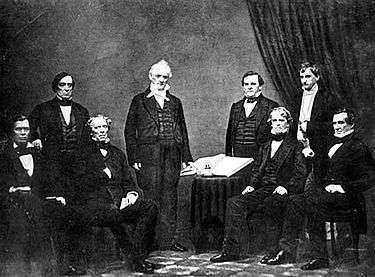 Thompson got involved in politics and was elected to the 26th Congress, serving from 1839 to 1851. He was appointed to the United States Senate in 1845 but never received the commission, and the seat went to Joseph W. Chalmers. Thompson was the chairman of the Committee on Indian Affairs in the 29th Congress. He lost reelection to the 32nd Congress and went back to practicing law until 1857, when newly elected President James Buchanan appointed Thompson United States Secretary of the Interior.

In the later years of the Buchanan administration, the cabinet members argued with one another on issues of slavery and secession.

Thompson's alignment with the Confederacy

Thompson sided with the Confederacy and resigned as Interior Secretary in January 1861. When he resigned, Horace Greeley's New-York Daily Tribune denounced him as "a traitor", remarking, "Undertaking to overthrow the Government of which you are a sworn minister may be in accordance with the ideas of cotton-growing chivalry, but to common men cannot be made to appear creditable."[1]

Thompson became Inspector General of the Confederate States Army. Though not a military man, Thompson later joined the army as an officer and served as an aide to General P.G.T. Beauregard at the Battle of Shiloh. He attained the rank of lieutenant colonel and was present at several other battles in the Western Theater of the war, including Vicksburg, Corinth, and Tupelo.

In March 1864, Jefferson Davis asked Thompson to lead a secret delegation in Canada. He accepted and arrived in Montreal in May of that year. Thompson appears to have been the leader of Confederate Secret Service operations in Canada.

From there, he directed a failed plot to free Confederate prisoners of war on Johnson's Island, off Sandusky, Ohio, in September. He also arranged the purchase of a steamer, with the intention of arming it to harass shipping in the Great Lakes. Regarded in the North as a schemer and conspirator, many devious plots were associated with his name, though much of this may have been public hysteria.

On June 13, 1864, Thompson met with former New York governor Washington Hunt at Niagara Falls.[2] According to the testimony of Peace Democrat Clement Vallandigham, Hunt met Thompson, talked to him about creating a Northwestern Confederacy, and obtained money for arms, which was routed to a subordinate. Thompson gave Ben Woods, the owner of the New York Daily News, money to purchase arms.[3]

One plot was a planned burning of New York City on November 25, 1864, in retaliation for Union Generals Philip Sheridan and William Tecumseh Sherman's scorched-earth tactics in the south.[4] Some speculate that John Wilkes Booth, who assassinated Abraham Lincoln, met with Thompson, but this has not been proven. (Thompson worked hard to clear his name of involvement in the assassination in the years after the war.) His manor, called "Home Place", in Oxford, Mississippi was burned down by Union troops in 1864.

After the Civil War, Thompson fled to England and later returned to Canada as he waited for passions to cool in the United States. He eventually came home and settled in Memphis, Tennessee, to manage his extensive holdings. Thompson was later appointed to the board of the University of the South at Sewanee and was a great benefactor of the school's.

He died in Memphis and was interred in Elmwood Cemetery.