James Rudolph Garfield (October 17, 1865 – March 24, 1950) was an American politician, lawyer and son of President James A. Garfield and First Lady Lucretia Garfield. He was Secretary of the Interior during Theodore Roosevelt's administration. 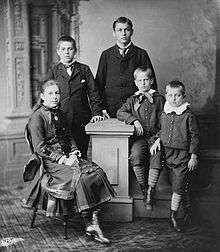 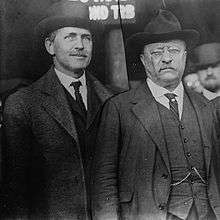 Garfield was born in Hiram, Ohio, the third of seven children born to James Abram and Lucretia Rudolph Garfield. For a year prior to his father's presidency, he studied at St. Paul's School in Concord, New Hampshire. On July 2, 1881, at the age of 15, he witnessed the shooting of his father by disgruntled office-seeker Charles J. Guiteau at the Baltimore and Potomac railroad station in Washington. The President and his son were waiting for a train en route to Williams College in Williamstown, Massachusetts, where young James had been recently accepted, when the shooting took place.

Following his father's death on September 19, 1881, he studied at Williams College, graduating in 1885, before moving on to Columbia Law School where he studied law and earned his J.D. in 1888. That same year, he was admitted to the Ohio bar and established the Cleveland, Ohio-based law firm of Garfield and Garfield, with his brother Harry Augustus Garfield. From 1890 until her death in 1930, he was married to Helen Newell. Their grandson, Newell Garfield, later married Jane Harrison Walker, a granddaughter of President Benjamin Harrison and Harrison's second wife Mary Dimmick Harrison as well as the great-grandniece of James G. Blaine.

From 1896 to 1899, he served in the Ohio State Senate. He was an influential advisor to President Theodore Roosevelt, serving as a Member of the United States Civil Service Commission from 1902 to 1903. From 1903 to 1907, he served as Commissioner of Corporations at the Department of Commerce and Labor, where he conducted investigations of the meat-packing, petroleum, steel, and railroad industries. From 1907 to 1909, he served in Roosevelt's Cabinet as Secretary of the Interior, where he advocated for the conservation of natural resources. He left this post on March 4, 1909, and returned to his law practice in Cleveland.[1] Garfield was a contender for the Ohio Republican gubernatorial nomination in 1910 but withdrew from the convention when it endorsed the Taft Administration; the convention went on to nominate future president Warren G Harding in the third round of balloting. During the 1912 presidential election, he was a key supporter of Roosevelt's bid for a third term. In 1914, he made an unsuccessful bid for Governor of Ohio on the Progressive Party ticket.

Roosevelt selected Garfield as one of eighteen officers (others included: Seth Bullock, Frederick Russell Burnham, and John M. Parker) to raise a volunteer infantry division, Roosevelt's World War I volunteers, for service in France in 1917. The U.S. Congress gave Roosevelt the authority to raise up to four divisions similar to the Rough Riders of 1st United States Volunteer Cavalry Regiment and to the British Army 25th (Frontiersmen) Battalion, Royal Fusiliers; however, as Commander-in-chief, President Woodrow Wilson refused to make use of the volunteers and the unit disbanded.[2]

Garfield died in Cleveland, Ohio[3] on March 24, 1950, the last surviving member of Theodore Roosevelt's administration. He had survived his father by almost 69 years. He was interred in Mentor Municipal Cemetery in Mentor, Ohio beside his wife Helen.