Chapman was born in Omega, Virginia, to James Jackson Chapman, a Virginia farmer, and his wife, Rosa Archer Blunt. He attended the University of Denver, where he earned his LL.D., and Westminster Law School in Denver, and later graduated from the University of New Mexico.

During World War I, Chapman served in the United States Navy Medical Corps, from 1918 to 1920. Chapman was manager of Edward P. Costigan's Senate campaign in 1930, and the Alva B. Adams Senate campaign in 1932. After Franklin Roosevelt's election in 1932, he was appointed Assistant Secretary of the Department of the Interior. 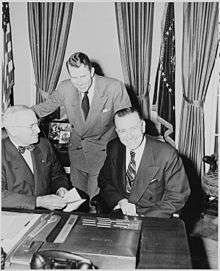 In 1939, Chapman was an early victim of the House Committee on Un-American Activities, as then-chairman Martin Dies, Jr. published a list of the government employees who were members of an Communist-controlled organization (Chapman was considered a member because there was a record that he had contributed two dollars to the American League for Peace and Democracy, which was raising money for the loyalists during the Spanish Civil War).

At the 1944 Democratic National Convention in Chicago, Illinois, Chapman was impressed by Truman sticking to his early agreement to support the current Vice-President Henry A. Wallace. He was promoted to serve as the Under-Secretary by President Harry S. Truman in 1946. Chapman was one of Truman's advisers supporting the decision to recognize the state of Israel in May 1948 over the objections of the State Department.

Chapman worked to promote Truman in 1948 election, and late in 1949, was promoted to serve as Secretary of the Interior, replacing to Julius A. Krug, who had not supported the Truman's campaign.

In 1951, Chapman denied a government loan to the aluminum company being run by Lea M. Harvey, because of a scandal that Harvey had sold artillery shells to the Navy during World War II that were dangerously out of specification.

After end of his service in the Department of the Interior, he practiced law in the firm of Chapman, Duff, and Paul.

Chapman died in Washington, D.C., at aged 81, and was buried in Arlington National Cemetery in Virginia.