Stuart was born in Staunton, Virginia, to judge Archibald Stuart, a third-generation American of Scots-Irish origin and his wife Eleanor (nee Briscoe), of distant English ancestry.

Stuart attended the College of William and Mary and graduated from the University of Virginia in Charlottesville. Stuart then studied law and was admitted to the bar in 1828.

Stuart was a member of the Virginia House of Delegates from 1836 to 1839 and then elected as a Whig to the 27th Congress. Stuart lost the election to the 28th Congress. 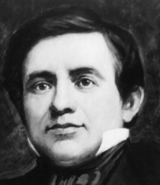 From 1850, Stuart served as United States Secretary of the Interior under Millard Fillmore for three years. The department had a culture of political patronage. Stuart didn't change this, but at least gave rules and standards to the political appointments and removed some of the administrative chaos inherent with patronage.

Stuart then served in the Virginia Senate from 1857 through 1861 and was a member of the Virginia state secession convention in 1861. As the Confederacy was established and the United States divided into two hostile camps, both sides moved steadily toward open conflict. A special delegation, composed of Stuart, William B. Preston and George W. Randolph, travelled to Washington, D.C. where they met President Abraham Lincoln on April 12. Finding the President firm in his resolve to hold the Federal forts then in the South, the three men returned to Richmond, Virginia on April 15. Stuart was a delegate to the National Convention of Conservatives at Philadelphia in 1866, and Stuart presented credentials as a Member-elect to the 39th Congress in 1865 but was not admitted.

Stuart was chairman of the Committee of Nine, which was instrumental in restoring Virginia to the Union in 1870, and was again a member of the Virginia General Assembly from 1874 to 1877.

Stuart served as rector of the University of Virginia from 1874 to 1882 and also as president of the Virginia Historical Society, as well as continuing with the practice of law. Stuart died in his hometown of Staunton in 1891 and is buried there at Thornrose Cemetery. Prior to his death, Stuart had been the last surviving member of the Fillmore Cabinet.

His son in law, John M. P. Atkinson (husband of Frances Peyton Stuart) was the tenth president of Hampden–Sydney College from 1857 to 1883.[1]

His home at Staunton, the Stuart House, was added to the National Register of Historic Places in 1972.[2]