Cecil Dale Andrus (born August 25, 1931) is an American politician and member of the Democratic Party who served as Governor of Idaho for 14 years; from 1971 to 1977, and again from 1987 to 1995. He also served in Washington as U.S. Secretary of the Interior from 1977 to 1981, during the Carter Administration. Andrus lost his first gubernatorial election in 1966, but won four subsequent elections (in 1970, 1974, 1986, & 1990) and served 14 years as governor, the most in the state's history. In public life he was noted for his strong conservationist and environmental views and accomplishments,[2] and a wildlife preserve established in 1993 in Washington County, Idaho, is named the "Cecil D. Andrus Wildlife Management Area" in his honor.[3][4]

Born in Hood River, Oregon, Andrus was the middle of three children of Hal and Dorothy Andrus, with older brother Steve and younger sister Margaret. They later lived near Junction City, on a farm without electricity. During World War II, the family moved to Eugene in early 1942, when "Cece" was 11, where Hal and his brother Bud opened a machine shop to refurbish sawmill equipment.[1] Andrus graduated from Eugene High School in 1948 at age 16 and attended Oregon State University in Corvallis, where he majored in engineering in his freshman year.[5]

At age 17, he got a good summer job with the local utility in 1949, and late in August, he eloped to Reno with Carol Mae May, his high school sweetheart.[1] Andrus had just turned 18, and she was 16 months younger. He decided to keep working and not return to college.[2][6] Following the outbreak of the Korean War, he enlisted in the U.S. Naval Reserves in February 1951, and served as an electronics technician aboard patrol aircraft until 1955. After his discharge from the Navy, Andrus moved to Orofino in North Central Idaho, where he worked in the timber industry in a variety of jobs at a sawmill his father co-owned.[5] After the sawmill closed,[7] Andrus switched to the insurance industry in 1963,[5] and moved his family down the Clearwater River to Lewiston in 1966.[8][9]

In 1960, at age 28, and concerned over the local Republican state senator's stance against needed education improvements in Idaho schools, particularly in rural areas of the state, Andrus filed as a Democrat to run against him and won, and was re-elected in 1962 and 1964 from Orofino (and Clearwater County).

Andrus first ran for governor in 1966, but was narrowly defeated in the Democratic primary by Charles Herndon, an attorney from Salmon.[10] Seven weeks before the November election, however, Herndon and two others died in a twin-engine private plane crash in the mountains 6 miles (10 km) northwest of Stanley,[11] while en route from Twin Falls to Coeur d'Alene in mid-September.[12][13] Andrus was appointed the nominee to take Herndon's place on the ballot. He lost the general election to Republican Don Samuelson of Sandpoint by more than 11,000 votes,[14] earning Andrus the unlikely distinction of losing both the primary and general election races for the same office in the same year. Andrus returned to the state senate two years later in 1968, representing Lewiston.[8]

Undaunted by his earlier setback, Andrus defeated Samuelson by over 10,000 votes in a gubernatorial election rematch in 1970.[15] This was attributed in large part to Andrus' public opposition to proposals for development of molybdenum mining in central Idaho's White Cloud Mountains, which Samuelson supported.[16][17] 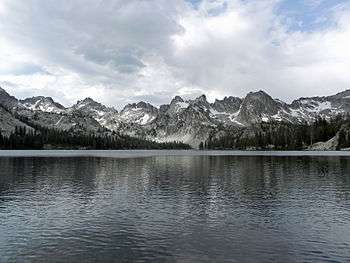 Alice Lake in the Sawtooth Wilderness in Idaho

During his first term as governor, Andrus played a key role in winning support by the U.S. Congress for Federal designation of the Sawtooth Wilderness Area in the State of Idaho.[2]

Andrus was easily re-elected in 1974 with over 70% of the vote, defeating Republican Lieutenant Governor Jack M. Murphy of Shoshone by a record margin.[18]

In January 1977, Andrus left his post as governor to serve as Secretary of the Interior for newly inaugurated President Jimmy Carter,[9] whom he had known since both were freshman governors in 1971. Andrus became the first Idahoan to serve in a Presidential Cabinet. He was succeeded in Idaho by Lieutenant Governor John V. Evans, a Democrat who served nearly a decade, winning re-election in 1978 and in 1982. 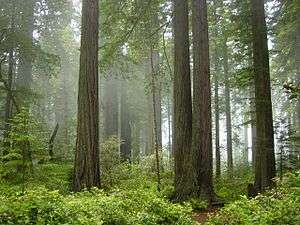 In 1979, when President Carter asked for the resignations of his entire Cabinet during an administration retreat at Camp David, the resignation of Andrus was not accepted. Andrus stayed on as Secretary of the Interior for the remainder of Carter's presidency, and returned to Idaho after Carter's term ended in January 1981.

Noted for his ability and patience, both in Idaho and while Secretary of the Interior, in working tirelessly to broker often very difficult, bi-partisan compromises leading to the successful passage of legislation, Andrus was frequently criticized by both pro-developmental interests and by Washington-based environmentalist groups for his various conservation and preservation efforts and initiatives.

Andrus wrote in his memoir about such a need for compromise relative to his successful, last-ditch efforts in securing passage of the Alaska Lands Act during the last month of the Carter Administration in December 1980, following Ronald Reagan's election in November: "The environmental groups were initially hostile. I actually had to listen to the idiotic argument (from the Wilderness Society and Sierra Club's paid Washington lobbyists) that they could get a better Alaska package out of Reagan and Watt."

"Cooler heads quickly prevailed," Andrus continues, "It proved the old adage that there's nothing like a hanging in the morning to focus the mind. Even though we were creating tomorrow's controversies, a 103-million acre [preservation] plan ... was a lot better than nothing."[21]

After several years in private life following his return to Idaho in 1981, Andrus surprised many by seeking and recapturing the Idaho governorship in 1986, when he defeated Republican Lieutenant Governor David H. Leroy in a close election.[22] During this second stint as governor, Andrus vigorously opposed federal efforts to store nuclear waste in Idaho. He also brokered a path-breaking agreement among land use and conservation interests to control water pollution from nonpoint sources to protect riparian and fish habitat in Idaho's rivers and streams.

In 1990, Andrus drew attention when he vetoed a bill, passed by the legislature, which "would have made abortion illegal except in cases of non-statutory rape reported within seven days, incest if the victim was under 18, severe fetal deformity or where the pregnancy posed a threat to the mother's life."[23] Andrus easily won re-election later that year against conservative Republican state senator Roger Fairchild of Fruitland,[24] and won every county except Lemhi. 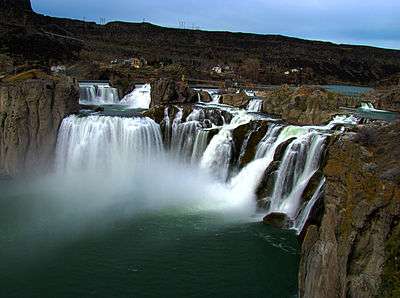 In his fourth and final term as governor, Andrus was again in the national spotlight due to the Endangered Species Act listing of several Snake River salmon species. These anadromous fish species spawn in their natal streams in Idaho and migrate seaward at a young age. Governor Andrus called attention to the downstream federal dams operated by the Army Corps of Engineers as the major culprit. His successful lawsuit against the federal government led to incremental changes in operations of the dams, and to continuing efforts for major conservationist modifications to the dams that are ongoing today. 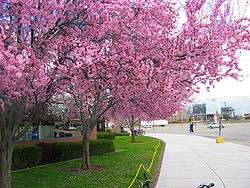 In 1995, Andrus founded the Andrus Center for Public Policy at Boise State University, and in 1998, published his memoir, Politics Western Style.[1]

An elementary school opened in 1997 in west Boise by the West Ada School District was named the "Cecil D. Andrus Elementary School" in his honor.[26]

Andrus remained active in the Idaho Democratic Party in the early 21st Century, and continued to campaign on behalf of other Democrats. In 2006 Andrus served as campaign treasurer for Idaho Democratic gubernatorial nominee Jerry Brady.[27] And, in February 2008, Andrus endorsed and campaigned actively on behalf of Barack Obama in Boise, Idaho.[28][29] At what was described as the "second biggest political rally in Idaho history," by the New York Times, Andrus introduced Obama and recalled hearing John F. Kennedy speak years earlier: "I’m older now, some would suggest in the twilight of a mediocre political career," Andrus said, "[but] I, like you, can still be inspired. I can still hope."[30]

In the closing page of his memoir, Andrus quotes the poet Robert Frost: "We should not have to care so much, you and I."[31] "But we do care," Andrus continues, "and we should. We care about the future ... I remain hopeful that I will be able to pass on to my grandchildren all the pleasures of life in an unspoiled West. Perhaps hope should be replaced by a stronger word. It is a matter of obligation."[31]

A 2011 book on Andrus and his career in public service described him as "Idaho's greatest governor."[2]