Gale Ann Norton (born March 11, 1954) served as the 48th United States Secretary of the Interior from 2001 to 2006 under President George W. Bush. She was the first woman to hold the position.

Norton was born in Wichita, Kansas and raised in Wichita and Thornton, Colorado, and graduated magna cum laude and Phi Beta Kappa from the University of Denver in 1975, and earned her juris doctor degree with honors from that university's College of Law in 1978. She divorced her first husband, Harold Everett Reed, when OutFront, the Denver gay newspaper, reported that he was gay.[1] She is currently married to John Hughes. In the late 1970s, she was a member of the Libertarian Party, and was nearly selected as its national director in 1980. Norton was influenced by the works of novelist Ayn Rand,[2] and has been associated with a number of groups in the "wise use" or "free-market environmentalist" movement such as the Property and Environmental Research Center,[3] of which she is a fellow. She also worked as an assistant to the Deputy Secretary of Agriculture and, from 1979 to 1983, as a senior attorney at the Mountain States Legal Foundation. 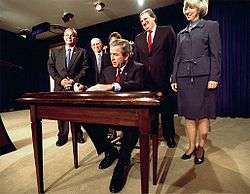 Gale Norton stands by President George W. Bush and other dignitaries at the signing ceremony of a bill.

She vehemently defended Colorado's Amendment 2 in 1992, an amendment to the state constitution that would prevent a city, town or county in the state from recognizing homosexual citizens as a protected class. The law was struck down at the federal supreme court as unconstitutional in Romer v. Evans.

In 1996, she was a Republican candidate for the U.S. Senate, but was defeated by then-Congressman Wayne Allard. Before being named Interior Secretary in 2001, Norton was a senior counsel at Brownstein, Hyatt & Farber, a Denver-based law firm. The firm was listed with the U.S. Congress as a lobbyist for NL Industries, formerly known as National Lead Company.

In a 1996 speech in support of states rights, she sided with the Confederate side in the Civil War, stating that "We lost too much" when the South was defeated.[4]

In 2003, Norton ordered that 90% of Trinity River be diverted to the Whiskytown diversion into Sacramento. As a result, for most of the summer in 2003, steelhead and spring chinook in Klamath River were plagued with an epidemic of ick, both bacterial and fungal. CDFG, USFWS, and NMFS counted more than 30,000 dead fish before they had to cease from the horrendous stench.

In 2004, Norton was again mentioned as a candidate for the U.S. Senate in her home state of Colorado, after the incumbent, Ben Nighthorse Campbell, decided to retire. She ultimately decided against running, and the seat was won by Democrat Ken Salazar.

Norton was succeeded by Idaho governor Dirk Kempthorne. At the time of her resignation, Norton was considered "the Bush administration's leading advocate for expanding oil and gas drilling and other industrial interests in the West."[5] After Norton's resignation, she joined Royal Dutch Shell Oil company as a legal adviser in the oil shale division.[6]

As of 2012, Norton worked for Norton Regulatory Strategies, a consulting firm that deals with environmental regulations.[7] In 2012, she also was a senior adviser for Clean Range Ventures, an energy venture capital firm. She serves as a board member for the Federalist Society, the Reagan Alumni Association, and the University of Colorado Renewable and Sustainable Energy Institute.[8]

In 2006, the Interior Department's inspector general initiated an investigation into potential links between Norton's former deputy, J. Steven Griles, and convicted felon Jack Abramoff. Italia Federici and David Stillwell were both found to be guilty. Before she could be investigated, Norton resigned as Secretary of the Interior in March 2006.[5]

On September 17, 2009, the United States Department of Justice opened another investigation into whether Norton's employment at Royal Dutch Shell violated a law that bars federal employees from discussing employment with a company if they are involved in decisions that could benefit that company.[9] The investigation focused on a 2006 decision by Norton's agency to award oil shale leases to Royal Dutch Shell, an agreement potentially worth billions of dollars. In 2010, the Justice Department closed the criminal probe, declining to press charges. Norton called the investigation a waste of money. Kris Kolesnik, an associate inspector general at the Interior Department defended the Justice Department's action, however, saying "we appropriately and thoroughly investigated serious allegations."[10]

During Norton's tenure, the inspector general also investigated Julie A. MacDonald, Norton's deputy assistant secretary for the Fish and Wildlife and Parks. The investigation found that MacDonald had "injected herself personally and profoundly in a number of Endangered Species Act decisions." MacDonald resigned in 2007.[11]

The Council of Republicans for Environmental Advocacy (CREA), an advocacy group founded by Norton and Grover Norquist in the 1990s,[12] accepted $225,000 in donations from disgraced lobbyist Jack Abramoff.[13]