Iidabashi Station (飯田橋駅, Iidabashi-eki) is a major interchange railway station which straddles Tokyo's Chiyoda, Shinjuku and Bunkyō wards. It was originally built as Iidamachi Station (albeit in a slightly different location), terminus of the then Kobu railway, precursor to today's Chūō Line. The Ōedo Line addition to the station in 2000 was designed by architect Makoto Sei Watanabe.

Iidabashi Station is served by the following above-ground and subway lines. 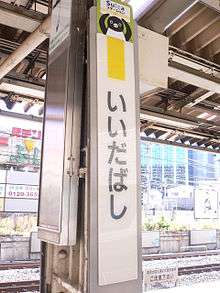 The JR East station has one island platform, serving the up and down local lines; there is no platform for the parallel rapid double track (for longer-distance commuter and express Chūō Line trains). The station is located on the inside of the Outer Moat. It is elevated over Mejiro-dori, a major thoroughfare from the imperial palace towards Ikebukuro.

The JR East platforms are scheduled to be moved and rebuilt a distance of approximately 200 m along the line toward Shinjuku to eliminate the gaps between trains and platforms on the sharply curved (300 m radius) section of track.[2][3]

Koishikawa Kōrakuen Garden can be reached by walking from this station.