Mitaka is located on the Kantō Plain, just outside the 23 special wards of metropolitan Tokyo, which are on its eastern borders. The Tamagawa Josui Canal, which runs alongside Mitaka station, has an important place in history, built in 1653 to feed the local metropolis. It is also the place where novelist Osamu Dazai committed suicide in 1948. The National Astronomical Observatory of Japan is located in Mitaka.

In 1994 there were 2,585 foreign residents in Mitaka, including 726 from North and South Korea, 713 from China, 441 from the United States, 114 from the Philippines, and 108 from the United Kingdom. Of all municipalities in Japan, Mitaka had the highest proportion of Chinese returnees.[2]

The area of present-day Mitaka was part of ancient Musashi Province. In the post-Meiji Restoration cadastral reform of July 22, 1878, the area became part of Kitatama District in Kanagawa Prefecture. The village of Mitaka was created on April 1, 1889 with the establishment of municipalities law. Kitatama District was transferred to the administrative control of Tokyo Metropolis on April 1, 1893. Mitaka was raised to town status in 1940. Mitaka City was officially founded on November 3, 1950. A motion to merge with neighboring Musashino City failed in 1955 by only a single vote in the Mitaka city assembly.

Mitaka is primarily a bedroom community for Tokyo. A number of animation studios, including Studio Pierrot[3] and Telecom Animation Film[4] have their corporate headquarters in Mitaka. A short-lived video game manufacturer TAD Corporation was founded and headquartered in the same location.[5][6][7] Subaru Tecnica International has its headquarters in Mitaka.[8] 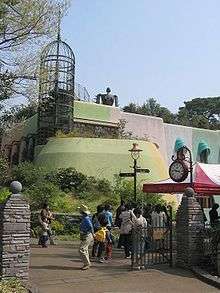 The Ghibli Museum in Mitaka