Beattyville is a home rule-class city[1] in Lee County, Kentucky, in the United States. The city was formally established by the state assembly as Beatty in 1851 and incorporated in 1872.[2] It was named for Samuel Beatty, a pioneer settler.[3]

The climate in this area is characterized by hot, humid summers and generally mild to cool winters. According to the Köppen Climate Classification system, Beattyville has a humid subtropical climate, abbreviated "Cfa" on climate maps.[6] 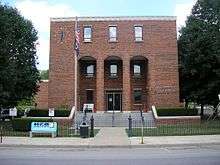 There were 509 households out of which 30.1% had children under the age of 18 living with them, 31.8% were married couples living together, 23.0% had a female householder with no husband present, and 42.2% were non-families. 39.7% of all households were made up of individuals and 18.7% had someone living alone who was 65 years of age or older. The average household size was 2.11 and the average family size was 2.82.

In 2010, Beattyville had the third-lowest median household income of all places in the United States with a population over 1,000.[10] It was the poorest majority white town.[11]

Beattyville is served by the Lee County School District. Schools located within Beattyville proper include:

There is also a Board Of Education and Central Office Complex building. The schools have consistently ranked in the top half of all the schools in the state.

The Lee County Board of Education has announced plans to close Beattyville Elementary and transfer the students to Southside Elementary. To accommodate the influx of students, an expansion of the facilities at Southside will be required. The decision was not popular with residents of the community The Board of Education exhausted its bonding capacity to fund the addition to Southside, so it proposed a tax increase in 2013 to fund other repairs at other facilities. Residents of the county signed a petition to place the tax increase on the ballot. The school board decided to delay the implementation of the tax until 2014 so as not to have to pay approximately $20,000 to fund a special election. The school board passed the tax in 2014 and again, a petition was filed placing the matter on the ballot for the fall 2014 general election. The proposed tax increase was defeated by a large margin at the polls.

Although there are no higher education opportunities in Beattyville or Lee County, a number of the state and national leaders of education exist within a 60-mile drive.[12]

Major employers in Beattyville and Lee County include:

The Lee Adjustment Center is a vacant, for-profit, medium security prison, with a capacity of 800 inmates, owned by Corrections Corporation of America. Vermont prisoners rioted in 2004 and were joined by Kentucky prisoners. Kentucky removed its last inmates in 2010, and Vermont did so in 2015.[13]

Since 1987, during the third weekend after the first Monday of October, the Main Street of Beattyville is closed to traffic, as the annual Woolly Worm Festival begins setting up. For Three-Days, Friday-"Opening Day", Saturday-"Parade Day", and Sunday "Closing Day" (Which also has a large carshow).

There are a large amount of musicians that perform almost constantly on one of two stages, dozens of booths offering a wide variety of merchandise, some interesting and delicious food, and helicopter tours of Beattyville/Lee County and "Woolly Worm Races", which is won by coaxing one of these "Hairy Caterpillars" up a string, the first one to reach the top wins, with the only rule being "No Touching", there is usually a cash prize for the winner.

Over 20 years later, The Woolly Worm Festival still remains a popular event, attracting a large number of tourists, and locals. Beattyville is just a few minutes from Natural Bridge State Resort Park, there is a "small-town atmosphere" in Beattyville, and the annual carshow are a few reasons thought to be why it is such a popular event.

The Beattyville/Lee County Volunteer Fire Department is headed by Chief Hargis Ross and the Beattyville City Police Department by Chief Greg Brandenburg. EMS are present at a combined city-county dispatch center on River Drive. Beattyville Waterworks and Beattyville Sewer are also located in the city hall building on Main Street. 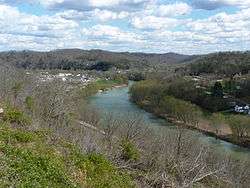 Emergency medical services for Beattyville are provided by the Lee County Ambulance Service in Beattyville, they provide 24/7 Advanced Life Support and Basic Life Support emergency services to all citizens and visitors of Lee County transporting primarily to Marcum and Wallace Memorial Hospital and KY River Medical Center as well as providing non-emergency transportation services and a wheelchair transport van.

WLJC-TV/DT, a television and radio station is headquartered in Beattyville. The channel is a Christian programming channel and is an affiliate of TBN, the Trinity Broadcasting Network. The station is carried through numerous local cable stations, DISH Network and DirecTV. Coverage is carried as far north as Georgetown and Cynthiana, Bardstown to the west, Whitley City to the south, and Pikeville to the east. The station is owned by Hour of Harvest, Inc.[14]