Nicholasville is a home rule-class city[3] in Jessamine County, Kentucky, in the United States. It is the seat of its county.[4] The population was 28,015 during the 2010 U.S. Census, making Nicholasville the 11th-largest settlement in the state.

Since the late 20th century, Nicholasville has undergone rapid growth; the population increased 380% between 1970 and 2010. The city serves as both a residential area for Lexington-area commuters and as an employment and shopping center for central Kentucky.[5]

The city is home to the Kentucky Wine & Vine Fest.[6] The annual festival showcases wines from commercial vineyards and amateur winemakers from across Kentucky and the surrounding region. In 2014 it was named as the "Official Wine Festival of Kentucky" by the Kentucky General Assembly.[7][8]

According to the United States Census Bureau, the city has a total area of 13.08 square miles (33.9 km2), of which 13.01 square miles (33.7 km2) is land and 0.07 square miles (0.18 km2), or 0.52%, is water. Some artificial ponds, including Lake Mingo (named after the Native American Mingo people), are present in the city.[10] Town Fork, a partially channelized stream, runs south and passes underneath downtown, eventually draining into Jessamine Creek.[11]

Nicholasville is in the northern periphery of the humid subtropical climate zone,[12] with hot and humid summers, cool winters, and occasional mild periods, especially in autumn. The city and the surrounding Bluegrass region have four distinct seasons that include cool plateau breezes, moderate nights in the summer, and no prolonged periods of rain, snow, or other severe weather.

Nicholasville was founded in 1798.[13] It was not formally incorporated until 1837.[1] The town was named in honor of Colonel George Nicholas, a father of the Kentucky constitution in 1792.[14]

The Young House in Nicholasville is listed on the National Register of Historic Places.

The city has grown rapidly since the late 20th century and is working to accommodate new highways and transportation needs. Many residents commute to Lexington; others are part of building Nicholasville as a center of retail services for the county.

The Nicholasville government operates under a non-partisan City Commission. The Commission is composed of an elected mayor and four commissioners. All are elected at-large, requiring each candidate to gain the support of the majority of the electorate. The commissioners are elected to manage particular city departments. They serve two-year terms; the mayor is elected to a four-year term.[2] The Commission wields all executive, legislative, and administrative powers.

In 2012 there was a proposal on the ballot to change the form of city government to that of a mayor-council, but it was defeated by 56% (5,004) to 44% (3,879) margin. Council members would have been elected from single-member districts, potentially broadening representation.[15][16] 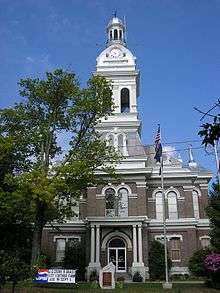 There were 10,492 households out of which 36.4% had children under the age of 18 living with them, 49.2% were married couples living together, 16.7% had a female householder with no husband present, 5.6% had a male householder with no wife present, and 26.5% were non-families. 22.3% of all households were made up of individuals and 7.4% had someone living alone who was 65 years of age or older. The average household size was 2.64 and the average family size was 3.07.

The eastern bypass of Nicholasville will give commuters an option of bypassing the city, while serving the residents of the eastern half of Jessamine county. In September 2002, the Federal Highway Administration approved an environmental assessment document.[22] Right-of-way purchase, estimated at $15 million, began in 2006, with relocation of utility lines in 2007 and construction in 2008. It was to be completed in 2010 at a cost of $73 million to complete. The Kentucky Transportation Cabinet predicts that when the highway opens, 58,000 travelers will use the western bypass and 45,000 will use the eastern bypass.[22]