This is a Chinese name; the family name is Lo.

Lo Kwan Yee (Chinese: 盧均宜; Jyutping: lou4 gwan1 ji4, born 9 October 1984) is a Hong Kong professional footballer who currently plays as wingback or midfielder for Hong Kong Premier League club Kitchee. He is an attacking midfielder who can operate in central midfield or on the right wing. He has represented Hong Kong at international level at various age groups, and is a member of the senior Hong Kong representatives.

Lo broke into the Rangers first team at only 15 years old. He made his first-team debut as a substitute in Rangers' 1–0 win at home to Kitchee on 14 August 2000, scoring the match winner in the 88th minute. The midfielder became the youngest-ever player to play in the First Division at 15 years and 309 days.

On 2 July 2007, Lo signed for Kitchee after his 8-year spell with Rangers, signing a one-year deal, with an option of another one-year extension. He was given the number 12 shirt.

On 2 September 2007, Lo made his league debut for Kitchee against South China to give the defending champion a 2–1 defeat. Lo suffered from hepatitis after the match and was kept out of first-team action for eight weeks. Lo then scored a goal in the Senior Shield Final 2007–08 against Eastern on 23 December 2007, which eventually ended in a 3–1 victory for Eastern.

In the 2010-11 Hong Kong First Division League season, Lo Kwan Yee played as right back for Kitchee. On 23 September 2010, in the 6:0 win over HKFC, Lo Kwan Yee was kicked in the head from goalkeeper Rudolf Karel Hollaender after scoring the second goal and had to be substituted. He received two stitches on his left ear.[1] At the end of the season, he helped the club win the league title by 1 point from arch rival South China AA. This was the club's first league title in 47 years, allowing the club to compete in the 2011 Barclays Asia Trophy and 2012 AFC Cup.

Ken Ng of Kitchee announced on 2 August 2011 that he has taken disciplinary action against Lo Kwan Yee for playing in a local soccer game without the club's consent, by stripping him of the club's captaincy. Further actions may follow.[2]

Lo was graduated from Ju Ching Chu Secondary School. His favourite player is Japanese midfielder Shinji Ono and he supports Liverpool F.C.. He has a nickname Hong Kong Messi because of his various and magical technique also his height, body size and playing style. Lo Kwan Yee has a C grade football coaching license. He volunteered to coach his former school's pupils.[3]

Lo Kwan Yee has a motorcycle license and he owns a Suzuki Skywave 400 s-Type.[4] But since 2010 he has stopped riding motorcycles.[5]

On 20 May 2012, Lo Kwan Yee won his girlfriend Canmy's hand in marriage with 99 roses and a ring after Kitchee beat Biuchun Rangers 4–1 and successfully defended its league title.[6] 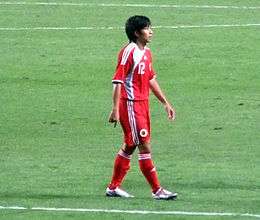 Lo Kwan Yee playing for Hong Kong against Japan in 2010