Chan Siu Ki (Chinese: 陳肇麒; Jyutping: can4 siu6 kei4, born 14 July 1985, Hong Kong) is a Hong Kong footballer who plays as a striker for Hong Kong Premier League club South China. He is the all-time top scorer for the Hong Kong national football team with 34 goals. As he is capable of playing with either feet, he is sometimes tactically deployed as winger on either flanks.

Chan was spotted by the management of Tai Po when he was playing amateur soccer. At that time, he was working in a store operated by his family. He was responsible for stock delivery and eventually developed a strong physique. He played for Tai Po in the Hong Kong Third Division League. He was spotted by Rangers and joined them. However, he was almost immediately loaned and then sold to Kitchee and thus never played for Rangers.

At Kitchee, Chan developed into a strong and pacy striker as the club employed a 4–3–3 system. As he continued to impress, he was called up to the Hong Kong team in 2005. However, he was later involved in several disciplinary incidents at Kitchee SC and was suspended from playing duties by the club management.

At the end of 2007–08 season, he joined arch-rivals South China for an undisclosed fee, rumoured to be a record-breaking sum, the former record being the HK$500,000 South China paid for Chan Wai Ho. 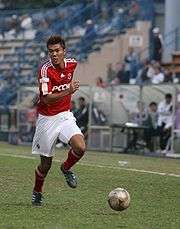 At South China, Chan inherited the no. 7 shirt vacated by Au Wai Lun. In the 2008–2009 season, he primarily played on the right wing because the centre forward position was often occupied by Detinho or Cacá.

In the 2009–10 season, with the signing of right winger Lee Wai Lim, Chan competed with new signing Leandro Carrijó for his preferred centre forward position after Cacá's return to Brazil.

On 1 August 2009, at the Panasonic Invitation Cup, Chan scored the first goal in South China's 2–0 victory over Tottenham Hotspur with an dipping half-volley from 30 yards.[1] Subsequently, after the two clubs forged a partnership, he joined the Spurs for a two-week trial at some point during December 2009.[2]

Although his trial was terminated prematurely because the Hong Kong U-23s progressed into the final of the 2009 East Asian Games, where he scored the equaliser against Japan minutes after coming on as a substitute at half time, he later revealed that the trial had benefited him a great deal, which included a special tutorial given by former England international Les Ferdinand and manager Harry Redknapp.[3] He was ranked 63rd in IFFHS World's Top Goal Scorer of the Year by International Federation of Football History & Statistics alongside Eduardo Da Silva, Mario Gómez and Fernando Torres.[4]

In the 2009 AFC Cup, Chan was red carded at the end of the quarter final first leg against Neftchi Farg'ona and was suspended for two games.[5] He returned in the semi-final second leg to a packed Hong Kong Stadium, but was unable to help South China overturn a 12 deficit to Kuwait SC. The club eventually lost 1–3 and went out of the tournament.[6]

In the 2010–11 Hong Kong First Division League season, Chan scored against Sun Hei but was then involved with a collision with teammate Kwok Kin Pong, which resulted in a left knee ligament injury that sidelined him for a month.[13] He returned from injuries in November to score two goals for South China against Kitchee, but could not prevent Kitchee from winning 4–3.[14] On 2 February 2011, he scored two goals against Sun Hei SC to help South China win 3–2 and move back to the top of the league table.[15]

In the 2011 AFC Cup, Chan scored the equalising goal from a Mateja Kezman cross for South China at home against Persipura Jayapura.[16] In the away game to East Bengal, he was sent off after two bookable offences.[17] In May, after teammate Kwok Kin Pong scored with a diving header in a Hong Kong FA Cup match between South China and Sun Hei SC, Chan rushed in to celebrate with Kwok, but his slide did not stop in time and caught Kwok in the face. The video was posted on the internet and picked up by Yahoo!'s Dirty Tackle.[18]

On 20 November 2011, Chan was involved in a scuffle in a match away to TSW Pegasus. In the confusion, he was seen on television to slapping Karl Dodd. Dodd retaliated and punched Chan in the face, resulting in him rolling on the ground. Dodd was sent off but Chan only received a yellow card. Chan has since apologised on his Facebook account.[19] Chan only received a warning letter and escaped punishment from HKFA's disciplinary committee for his altercation with Dodd, and Chan was himself surprised by the verdict.[20] He scored his first goal of the season for South China on 24 November when he headed in a cross from Kwok Kin Pong to help South China progress to the semi-final of the 2011–12 Hong Kong Senior Challenge Shield by beating Sham Shui Po by 2–1 (aggregate 3–2).[21]

Amidst his second smoking scandal in 4 months, South China's chairman Steven Lo announced on his official blog on 23 May 2012 that Chan's contract had been terminated by the club.[22]

He was urgently recalled by the Hong Kong U-23 team from Tottenham Hotspur for the final of 2009 East Asian Games on 12 December 2009. He arrived just before the match and was called into play at half-time. Two minutes after half-time, he equalised for Hong Kong. He also scored a penalty in the penalty shootout a.e.t, helping Hong Kong to their first international football tournament title. On winning the gold medal, he exclaimed to the assembled media: "We are gold medal athletes, too!" (我哋都係金牌運動員！). The line has since been associated with him.[23][24]

Due to ligament injury to his left knee, Chan was replaced by Kitchee captain Lo Kwan Yee for the 2010 Asian Games.[25]

In the second round of the preliminary competition of the 2010 East Asian Football Championship held in Kaohsiung in August 2009, he missed a penalty against North Korea but scored 4 goals against Guam.[26] In a 2010 FIFA World Cup qualifying match, he scored a hat trick in a game against Timor-Leste, which Hong Kong went on to win 8–1.

On 3 June 2011, Chan scored a goal against Malaysia in a friendly, adding his goal tally to 27 and helping him surpass Au Wai Lun to become Hong Kong's all-time top scorer.[27] On 4 October, he scored the first goal in Hong Kong's 6–0 win over Chinese Taipei in the 2011 Long Teng Cup. Hong Kong thus successfully defended the trophy. he also won the Most Valuable Player award.[28] On 29 February 2012, in Hong Kong's first match under new coach Ernie Merrick, Chan scored a hat-trick against Chinese Taipei as Hong Kong won the match 5–1.[29]

In 2009, soon after his move to South China and subsequent success with Hong Kong U-23, he became a celebrity in Hong Kong. His love life became a matter of interest to the local paparazzi. He was rumoured to be two-timing after pictures of him and TVB actress Helen Lee was leaked on the internet, though he denied it.[30] He claimed to have broken up with Lee in August and gone back with Natalie in October.[31]

He appeared on the government's television advertisement for the 2012 Legislative Council electoral reforms, in which he urged people to take their opportunity if they want to score a goal. The advertisement attracted a barrage of criticism against him on South China's official blog. Chan explained through his management company that he has no political views and he would not persuade people to support or oppose the LegCo reforms. He only accepted the invitation to appear in the advert due to the government's sincerity and he received no payment.[32]

Chan is a spokesman for Jockey International along with teammate Man Pei Tak. Both claimed to be embarrassed at the photo shoot but were happy with the pay.[33]