Lake Charles (French: Lac Charles) is the fifth-largest incorporated city in the U.S. state of Louisiana, located on Lake Charles, Prien Lake, and the Calcasieu River. Founded in 1861 in Calcasieu Parish, it is a major industrial, cultural, and educational center in the southwest region of the state.

It is considered a regionally significant center of petrochemical refining, gaming, tourism, and education, being home to McNeese State University and Sowela Technical Community College. Because of the lakes and waterways throughout the city, metropolitan Lake Charles is often referred to as the Lake Area. 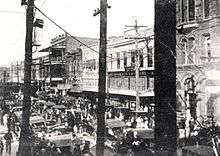 A view of Downtown Lake Charles, circa 1917

However, Lake Charles soon rebuilt itself and continued to grow and expand in the twentieth century. The Charleston Hotel was completed in 1929, during the administration of Mayor Henry J. Geary.[6] During and after World War II, Lake Charles experienced industrial growth with the onset of the petrochemical refining industries. The city grew to a high of some 75,000 people in the early 1980s, but with local economic recession, the population declined.

With the advent of the gaming, manufacturing, and aviation maintenance industries, the city rebounded with a population of 71,993 as of 2010. 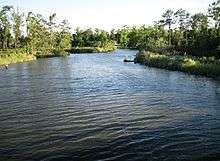 Lake Charles is tied with Port Arthur, Texas, and Astoria, Oregon, as the most humid city in the contiguous United States, and the second-most humid measured location behind unincorporated Quillayute, Washington. The average relative humidity in Lake Charles is 90% in the morning, and 72% in the afternoon.[11]

Swimming in polluted Lake Charles opposite the Olin Mathieson chemical plant in 1972. Cleanup efforts to Lake Charles' waterways have been so successful that Prien Lake now supports both recreational and commercial fishing, and has a safe public beach.[16][17] 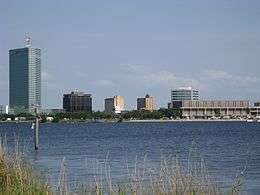 Downtown Lake Charles, with Capital One Tower to the left

Several petrochemical plants and an oil refinery are located nearby along the Calcasieu Ship Channel. Turner Industries, Axiall, and Citgo each employ over a thousand engineers.[18] The Trunkline LNG terminal, immediately southwest of Lake Charles, is one of the United States' few liquified natural gas terminals. It has facilities for LNG receipt, storage, and re-gasification. Other industrial companies include PPG Industries, Phillips 66, Westlake Chemical Corporation, Sasol, and W. R. Grace. Local industry also includes a number of manufacturing companies. Chennault International Airport hosts AAR Corp, which services airplanes, and a Northrop Grumman facility. The Shaw Group has a manufacturing facility which manufactures and exports parts for nuclear power plants.[19] 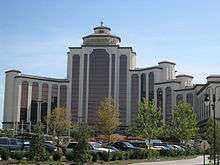 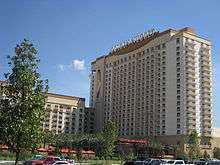 Lake Charles has the biggest casino market in the state of Louisiana.[24] The L'Auberge du Lac Casino Resort is a 242 acres (98 ha), 26-story hotel in Lake Charles. It has nearly 1000 guest rooms, as well as a casino, golf course, spa, and meeting center.[25] A second casino, the Golden Nugget Lake Charles, opened in late 2014 next to L'Auberge du Lac.[26] The casino resort has more than 740 guest rooms, a casino, golf course, meeting space, retail corridor and a private beach and marina.[27]

The city has one university and one community college. McNeese State University, located on a 121-acre (0.49 km2) main campus lined with oak trees in the heart of Lake Charles, is a four-year public university in the University of Louisiana System. Contraband Bayou flows through the campus. McNeese was founded in 1939 and named after educator John McNeese. It offers over 80 majors, and includes the colleges of Business, Education, Engineering and Engineering Technology, Liberal Arts, Nursing, Science, Honors College, and the Doré School of Graduate Studies. The university is accredited by the Commission on Colleges of the Southern Association of Colleges and Schools.[28] Other properties include a 65-acre (260,000 m2) athletic plant and student apartment complex, the Louisiana Environmental Research Center, Burton Coliseum, the 503-acre (2.04 km2) MSU Farm, and nearly 1,600 acres (6.5 km2) of donated farm property used for research, farming, and ranching.[29] Over 8,500 students attend the university.[30]

Lake Charles' public schools are operated by the Calcasieu Parish Public School System. There are two charter schools, and a number of private schools as well. 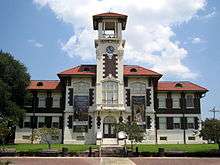 Lake Charles has a strong Creole & Cajun culture because of its location in south Louisiana. The city has its own symphony orchestra, the Lake Charles Symphony. It was founded in 1938 and hosts concerts at the Rosa Hart Theatre,[36] which has a capacity of over 2,000.[37]

Lake Charles is home to a number of museums and art galleries. The largest, Imperial Calcasieu Museum, features a permanent historic exhibit with artifacts and an art gallery.[38] Its grounds are home to the Sallier oak tree, which is around 400 years old.[39] The Historic City Hall Arts and Cultural Center is used as exhibition space; moving art exhibits are displayed at this public art gallery each month.[40] It also hosts the Charlestown Farmers' Market, which provides a venue for local farmers and merchants to sell goods.[41] The USS Orleck Naval Museum, a naval destroyer from 1945, is open for public tours as a veterans memorial and museum. It is located on the river in North Lake Charles.[42]

The Central School Arts and Humanities Center, located in the historic Charpentier District, is owned by the city. Charpentier is French for carpenter, a reference to the carpenter-architects who built the mixed-style homes in the district. Central School features the Black Heritage Art Gallery, which is on the Louisiana African American Heritage Trail[43] as well as the Mardi Gras Museum of Imperial Calcasieu, which features extravagant costumes and an interactive float. It has the largest collection of Mardi Gras memorabilia in the South.[44] Other studios and cultural activities include the Art Associates Gallery, Studio 347 Gallery, the Lake Charles Symphony, and the Lake Charles Community Band. 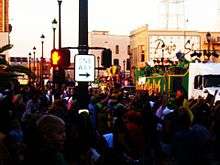 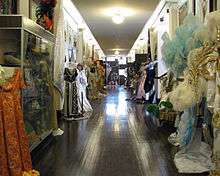 Many festivals are held at the Civic Center. The most popular, Contraband Days, is hosted on the Civic Center grounds and lakefront. Contraband Days is a twelve-day annual festival held during the first two weeks of May. The celebrations are filled with savory Cajun food, family fun, and live entertainment, including several national acts. The festival is regularly attended by more than 200,000 people, making it one of the largest celebrations in Louisiana. In a reference to the legends of piracy on the lake and Contraband Bayou, the festival begins when the pirate Jean Lafitte[5] and his crew capture the city and force the mayor to walk the plank.

Lake Charles is home to the McNeese Cowboys, whose football team hosts games at Cowboy Stadium which has a seating capacity of 17,410.[50] Burton Coliseum hosts the Cowboys' basketball teams. Golf is popular at the city's Mallard Cove Golf Course. Other golf courses include Gray Plantation Golf Course, Lake Charles Country Club Golf Course, the Contraband Bayou Golf Club, and the Country Club at Golden Nugget. Gray Plantation Golf Course is featured on Louisiana's Audubon Golf Trail.[51] The city has 31 parks, many of which include playground equipment, athletic facilities, and walking paths.[52] Shiver-Me-Timbers Millenium Park, located downtown, was built entirely by volunteers in 2000. Adventure Cove, a state-of-the-art park, was also built by volunteers, and is specifically designed for handicapped children.[53] The South Lake Charles Little League has had nationally-winning teams televised on ESPN. Hunting and fishing are popular with both residents and visitors to the Lake Area.[54] An All-American Road, the Creole Nature Trail - Louisiana's Outback - brings tourists to Lake Charles and throughout Southwest Louisiana.

The City of Lake Charles is governed by a mayor-council form of government. The elected officials include the Mayor, the Clerk of Court, and seven City Council members. Each council member represents a particular district within the city limits. One council member is elected president and presides over each meeting. The mayor serves a four-year term. The current mayor is Randy Roach, a Democrat who has served since 2000.[55] The city attorney is appointed by the mayor.

The Lake Charles City Court's jurisdiction covers all within the city limits as well as Ward 3 in Calcasieu Parish.[60] The Fourteenth Judicial District Court, located in downtown Lake Charles, covers Calcasieu Parish and includes nine judges who preside over family, juvenile, civil, and criminal trials.[61] Lake Charles is home to a United States District Court, located downtown.[62] The Third Circuit Court of Appeals is headquartered in the city.[63]

Lake Charles is served by Charles Boustany of Louisiana's 3rd congressional district. Much of the city is represented by Senator Ronnie Johns of District 27 in the Louisiana State Senate; however, Dan Morrish's District 25 includes some neighborhoods of south Lake Charles.

The most widely distributed, daily newspaper is The American Press. Other popular periodicals include Lagniappe Magazine, The Jambalaya News, Gumbeaux Magazine, and Thrive Magazine. The Contraband is McNeese State University's student newspaper.

The city's streets are laid out primarily in a grid pattern. Interstate 10 passes through Lake Charles, connecting the city with Houston to the west and New Orleans to the east. The Calcasieu River Bridge crosses the Calcasieu River and part of lake. Featuring decorative flintlock pistols on the railing, it is 135 feet (41 m) high. About 50,000 vehicles pass over it daily.[64] Despite its age of over 50 years, it is considered safe by the Louisiana DOTD.[65]

Interstate 210 is an interstate highway bypass that loops through the southern portion of the city. The curving Israel LaFleur Bridge goes over the Calcasieu Ship Channel. This bridge has a 96% rating even after withstanding recent hurricanes. The loop has served Lake Charles commuters for 40 years, and carries about 40,000 vehicles per day.[66]

Lake Charles is served by two airports. Lake Charles Regional Airport,[67] located south of the city, provides commercial airline service to Houston and Dallas. Chennault International Airport,[68] while a fully operational airport, is an industrial and maintenance center. The latter airport, a former Strategic Air Command US Air Force base during the Cold War, is named for Maj. Gen. Claire Chennault, the aviator famous for commanding the Flying Tigers fighter group during World War II.

The Port of Lake Charles is the thirteenth-busiest seaport in the United States, the fourth-largest liner service seaport in the U.S. Gulf, and a major West Gulf container load center. The City Docks in Lake Charles are the main hub of shipping activity.[69] The Calcasieu Ship Channel provides direct access to the Gulf of Mexico 34 miles (55 km) downstream. The ship channel, which has a projected depth of 40 feet (12 m) and a bottom width of 400 feet (120 m), intersects the Gulf Intracoastal Waterway just north of Calcasieu Lake.[70]

Lake Charles Transit, the city's bus system, provides five routes throughout the city.[71] It has one Greyhound bus station, and the Amtrak station serves the Sunset Limited train route.

Electrical needs are provided by the energy company Entergy. The city provides drinking water and sewage service to residents within city limits. Water is treated at six water treatment facilities in the city.[72]

Christianity is the predominant religion in the Lake Area. Roman Catholicism is the largest individual denomination, claiming about 50% of the population. Lake Charles is also home to various Protestant Christian denominations, the largest being the Southern Baptist congregation with 30%.[73] There is a ward of The Church of Jesus Christ of Latter-day Saints in Lake Charles. There are also religious communities from other faiths such as Islam and Judaism.

Lake Charles is the setting and title of a song by Lucinda Williams (a Lake Charles native) on her album Car Wheels on a Gravel Road.

"When I get off of this mountain, you know where I want to go?Straight down the Mississippi river to the Gulf of MexicoTo Lake Charles, Louisiana, little Bessie, girl that I once knew ..."

Lake Charles is featured or mentioned in The Drowning Pool, The Beyond, A Taste of Louisiana with Chef John Folse & Co., Passion Fish, Good Eats, UFC 22: There Can Be Only One Champion, UFC 24: First Defense, Blue Vinyl,[75] Little Chenier, Mercy,[76] Split Ends, All Over But to Cry, Film Hustle, and Good Boy.[77][78]

See also: List of sister cities in the United States