Hymnals, also called hymnbooks (or hymn books) and occasionally hymnaries, are books of hymns sung by religious congregations. The following is a list of English-language hymnals by denomination. 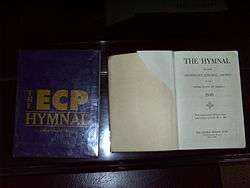 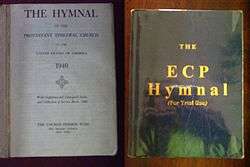 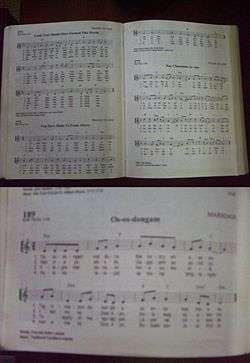 Some pages of the ECP Trial Hymnal containing some songs in some Igorot languages. (Top-right) Nay Chawatem Ay Apo, a song of praiase and (below) Os-os Daongan, a wedding song. 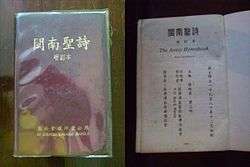 The Amoy Hymnal published by the Church of the Province of South East Asia. 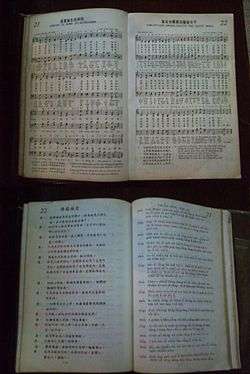 The Amoy Hymnbook showing a song and part of the service in English and Fookien.

Church of the Brethren

For older hymnals, see the Church of Jesus Christ of Latter-day Saints hymns.

Church of the Nazarene

Churches of Christ in Australia

Note: Not all congregations use a hymnal from their own denomination. For example there are churches in the Evangelical Lutheran Synod that use the two oldest LCMS hymnals as well as the current WELS hymnal.

The official sacred music of most of the Roman Catholic Church (specifically, the Roman Rite) in the form of Gregorian chant, and appears in the Roman Missal and the Roman Gradual. The Missal contains all that is to be sung during Mass by the priest at the altar, while the Gradual contains all the music sung by the choir. The standard Roman Gradual contains complex Gregorian Chant while the Graduale Simplex substitutes easier Gregorian chants. All of these are in Latin, and are published for use throughout most of the Latin Rite (the vast majority of Roman Catholic parishes.

Of Eastern Catholic rites, several of these have hymnals and service books translated in whole or in part into English. The Byzantine Rite Catholics generally use the same music as the Eastern Orthodox, although some specifoc Catholic translations of some hymn books into English do exist. All pf the Byzantine Rite churches, and their Eastern Orthodox counterparts, use essentially the same lyrics in their hymns; the primary difference between different Byzantine Rite Catholic churches, such as between Ukrainian Greek Orthodox Church and the Melkite Catholic Church of Antioch, is in the form of the music used. The churches of the Rusyn ethnic group, which following the Union of Brest became Eastern Catholics developed a form of congregational singing known as Prostopinije; recently, many Rusyns in the United States and central Europe have rejoined the Eastern Orthodox church, but Prostopinike remains in use by both groups of Carpatho-Rusyn heritage, and has been adapted for use in both traditional and modern English.

The Latin Rite contains three other liturgical traditions still in use: the subtly different Rite of Braga, which is mostly like the Tridentine Mass but differing in a few minor points, historically used in Portugal before the introduction of the Novus Ordo Mossae, and the substantially different Ambrosian Rite, used by most Catholic parishes in Milan and some adjoining regions, and the Mozarabic Rite, which is also very different from the Roman Rote; at one time it was the standard liturgy throughout most of Spain during the period of Moorish occupation; later, its use dwindled, and it is now celebrated daily in a single chapel in the Toledo Cathedral built especially for that purpose; it sees very limited use elsewhere. These rites have only partially been translated into English, and are never celebrated in English, the diaspora from their locales having adopted the Roman Rite.

There are also several monastic rites slightly different from the old Tridentine Mass, such as the Dominican Rite and the Carthusian Rite. The latter remains in use, exclusively in Latin; the former was translated entirely into English, but is always celebrated in Latin; its use has become rare, but it is still celebrated on occasion. There exist official English translations of the Missal and Breviary of the Dominican Rite, but not of the other distinctive monastic usages..

It has been the practice to publish hymnals of songs in the vernacular language for more than 400 years, and many of these now contain some Latin Gregorian chants. They include the following:

Hymnals from third-party publishers in use in the Catholic church

All of the Eastern Orthodox and Byzantine Catholic churches share a common set of hymnals, which provide the basic text for the hymns. The Octoechos contains the hymns sung in each of the eight tones, used throughout most of the year; the Triodion contains the special hymns and liturgical propers of Lent and Holy Week, the Pentecostarion, also known as the Flowery Triodion, contains the equivalent proper hymns for Pascha (Easter), Brightweek, and the period of time lasting through the liturgical season generally known as Eastertide in the West, including the feast of the Ascension, Pentecost and culminating on the first Sunday after Pentecost, All Saints Day (according to the Byzantine liturgical calendar.[22]

The Menaion contains the hymns for various holidays and feasts throughout the year. Variants of it include the Festal Menaion, containing only the most important feasts of the Lord and of the Theotokos, the General Menaion, which provides abstract services for particular classes of saint, and the Monthly Menaion, a twelve volume set, all of which has been translated into English, containing all the proper hymns (canons, troparia, kontakia) for the feast says of individual saints throughout the year. Lastly, the Irmologion, not specifically translated into English but included in other volumes, such as some editions of the Octoechos and Pentecostarion, contains the Irmoi, a standard set of responsaries sung during the canons at Matins.[23]

All of these works aside from the Irmologion exist in English translations, in various forms, including anthologies. One of the oldest and most comprehensive is The Divine Prayers and Services of the Orthodox Church, compiled by Fr. Seraphim Nassar, which contains substantial excerpts from the Octoechos, the Menaion, the Triodion and the Pentecostarion.

Like the Byzantine Rite, the West Syriac Rite uses an eight mode system of chant similar to Byzantine Chant and Gregorian Chant, however, traditionally this was not notated, but rather, the melodies were oassed down via oral tradition. The principal hymnal of the Syriac Orthodox Church is the Beth Gazo ("Treasury"); proper hymns for various feasts are also found in the books of the liturgy, the Shi'mo, or Divine Office, and the Fanqitho, which replaces the Shi'mo in Great Lent, Holy Week, Pascha and during major feasts throughout the church year. Of these, only the book of the Liturgy, containing the Anaphoras, in various forms, and the Shi'mo, have been translated into English.[24]

The Coptic Rite also lacks a system of musical notation; its system of chant, Tasbeha, is somewhat less complex than West Syriac Chant; it is not based on eight modes, but rather a few sets of melodies for use on different occasions; it is passed down primarily as oral tradition, and certain portions of it, for example, the chanting of the priests, rely on improvization based on the use of standard musical phrases. The Coptic Euchologion contains the hymns of the Divine Liturgy, whereas the books of the Annual Psalmody and the Khiak Psalmody contain the hymns of the divine office, the latter specifically for the season of Advent. There is also a book of offices for Holy Week, and various books containing special services such as funerals, marriages and ordinations, all of which have been translated into English. There exist also trilingual hymnals containing the Divine Liturgy of St. Basil set to Western notation.[25]

In contrast, both the Armenian Rite and Ethiopian Rite make use of musical notation, whoch in the case of the Ethiopian church is ancient, dating back to the 6th century; however, these churches serve their liturgies exclusively in Classical Armenian and Ge'ez respectively, and consequently, very little pf their hymnals or other service books have been translated into English. The hymnals and service books of the Ethiopian church are particularly obscure.[26]

Hymnals of the Church of the East

The Assyrian Church of the East, the Ancient Church of the East, the Chaldean Catholic Church and the Syro Malabar Catholic Church use the East Syriac Rite, which like the West Syriac Rite lacks a system of musical notation and is instead passed down through oral tradition; it makes use of t the following hymnals: the "Turgama" (Interpretation), containing hymns sung by deacons at the liturgy (our Graduals and Sequences), the David (Dawidha = Psalter), "Khudhra" (= "cycle", containing antiphons, responsories, hymns, and collects for all Sundays), "Kash Kõl" (= "Collection of all"; the same chants for week-days), "Kdham u-Wathar" (= "Before and after"; certain prayers, psalms, and collects most often used, from the other books), "Gezza" ("Treasury", services for feast-days), Abu-Halim (the name of the compiler, containing collects for the end of the Nocturns on Sundays), "Bautha d'Ninwaie" (= "Prayer of the Ninevites", a collection of hymns ascribed to St. Ephraem, used in Lent). The Baptism Office ("Taksa d'Amadha") is generally bound up with the Liturgies. The "Taksa d'Siamidha" has the ordination services. The "Taksa d'Husaia" contains the office for Penance, the "Kthawa d'Burrakha" is the marriage service, the "Kahneita", the burial of clergy, the "Annidha" that of laymen. Lastly the "Khamis" and "Warda" are further collections of hymns (see Badger, "The Nestorians and their Rituals", London, 1852, II, 16-25). Naturally not every church possesses this varied collection of books, and most have not been translated into English. Nonetheless. there are 19th century translations available of the Divine Liturgy and the Divine Office. [27]