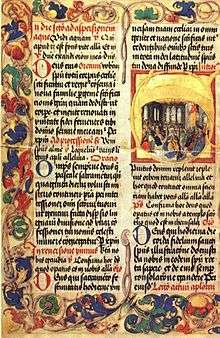 The Roman Gradual (Latin Graduale Romanum) is an official liturgical book of the Roman Rite containing chants, including the Gradual but many more as well, for use at Mass.

The latest edition, that of 1974, takes account of the 1970 revision of the Roman Missal.

In 1979, the Graduale Triplex: The Roman Gradual With the Addition of Neums from Ancient Manuscripts (ISBN 978-2852740440 in English; ISBN 978-2-85274-094-5 in Latin) was published. It adds reproductions of the neumes from ancient manuscripts placed above and below the later notation.

Sanctissimus namque Gregorius, from the 1908 edition of the Roman Gradual.

The Roman Gradual includes the Introit (entrance chant: antiphon with verses), the gradual psalm (now usually replaced by the responsorial psalm), the sequence (now for only two obligatory days in the year), the Gospel acclamation, the offertory chant, and the Communion antiphon. It includes chants that are also published as the Kyriale, a collection of chants for the Order of Mass: Asperges chant, Kyrie, Gloria, Credo, Sanctus, Agnus Dei.

There have been and are other Graduals, apart from the Roman Gradual. For instance, the Dominican Order had its own rite of Mass and its own Gradual: "Graduale juxta ritum sacri ordinis praedicatorum" (Gradual according to the rite of the Sacred Order of Preachers).

Structure of the 1974 edition

The 1974 Roman Gradual is arranged into 8 major sections:

Originally the book was called an antiphonale missarum ("Antiphonal of the Mass"). Graduals, like the later Cantatory, may have originally included only the responsorial items, the Gradual, Alleluia, and Tract.[1]

In 1908 a revised edition of the Roman Gradual was published. In it Pope Pius X gave official approval to the work of the monastery of Solesmes, founded in the 1830s by Dom Guéranger, was done by Dom Pothier in restoring Gregorian chant to its purity by removing the alterations it had undergone, not really for the better, in the centuries immediately preceding. The work had involved much research and study.[2]

That edition of the Roman Gradual was the basis also of a more general compilation of chants known as the Liber Usualis. This was not an official liturgical book, but it contained all the chants of the Roman Gradual, as well as other chants and hymns and instructions on the proper way to sing them.

In 1974, after the Second Vatican Council an edition of the Roman Gradual based on that of 1908 was issued. While the melodies remained unchanged, there was a relocation of pieces to fit the revised Roman Missal and calendar. Some chants were replaced by ancient ones rediscovered after 1908.[3]